Lake of Voices is a story that wants to impart one simple, heartbreaking message to the reader: you can’t save everyone.

The story follows Kikka the hardened warrior on her journey across Lake Sinnlos.  The lake is infamous thanks to the dangerous manner by which people have to cross.  Crossing by boat is impossible, and the lake is so massive that traveling around its border takes days.  Instead, most people desperate to get across the lake must wait until nightfall when a series of maze-like magical bridges rise out of the water and a guide appears to lead them across.  Kikka and her ally Bemelle are attempting to reach a village under siege as quickly as possible, and meet a young woman named Margret trying to cross for her own reasons. The guide appears and informs you that at least one person will perish in the crossing.  On that ominous note, your journey begins.

As varied as visual novels can be, most of those with branching storylines share a similar format establishing what constitutes a good or bad ending.  If your character ends up alone or dead, you’ve likely hit the bad ending. Conversely, if you’ve permanently entrenched yourself in the life of your romantic interest or prevented your character from losing anyone/seeing them die/killing them yourself?  You’ve probably at least finagled a neutral ending, if not a good end. It’s as if the VN wants to give you a handy checklist to constantly review and ensure that you’re on the right track; the more bodies you haul across the finish line via save-scumming and clever choices, the better.  And all too often, the best endings only come if you somehow manage to play the proper hero and get to ride off into the sunset with everyone.

Lake of Voices refuses to give you such a simplistic happy ending. 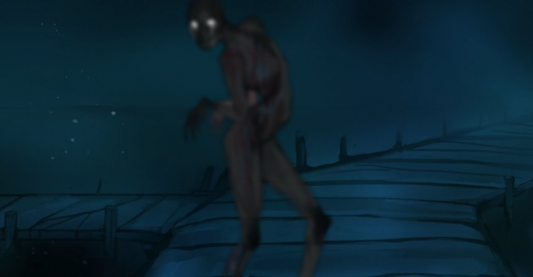 Once again, the cornerstone of this VN is the concept that not everyone can be saved.  Despite your best efforts, your constant cycle of saving/loading to find the right combination of action and dialogue choices, even your perusal of a guide when all else fails, there is no way to complete the story with everyone alive at the end.  Even the best endings when you manage to max out your affection with specific characters are still overshadowed by the knowledge that you were able to save most, not all, of your companions.

Lake of Voices isn’t the first game to do this, obviously.  But it handles the deaths much better than other narratives because it allows the characters to process and grieve the losses of their companions in wildly different ways, depending on the choices you make.  There is the quiet pain Kikka suffers if you choose not to bring Lu along with your party and leave him to an unspecified death on the bridges, versus the abrupt shock and sting of losing Margret before you can truly get to know her, versus the gut-wrenching ache of losing your long-time friend and fellow guard, Bemelle.

Lake of Voices understands that grief can take wildly different forms, based on the circumstances in which a person’s untimely demise may have occurred and your attachment to them.  I remember feeling underwhelmed by the deaths in the first two seasons of Telltale’s The Walking Dead, because the game often treated the demise of its characters as just an ordinary event which happened in the midst of a series of other events.  They’re hiccups in the otherwise smooth narrative, jarring interruptions always followed by a formulaic period of tranquility and puzzles to emphasize that death happened, oh well, time to move on.

But the focal point of Lake of Voices is those deaths, the underlying current of despair following unavoidable loss.  The heroes are not only forced to accept the horrific truth that not everyone can be saved, but also must come to terms with their own emotional turmoil when faced with their limits as humans contending against magic and monsters.  They scream, they sulk, they lash out against the guide to cover up their own feelings of inadequacy. And because everyone has such wildly different reactions to the deaths of their fellow travelers, you never quite know the best way to handle things when you do reach a breathing point in the story.  Perhaps Bemelle wants a little alone time for Kikka and himself, but if you grant him this then something terrible might befall Lu or Margret. You don’t possess the time, resources, and especially the psychological training necessary to handle this sort of crisis situation, but you have to muddle your way through it all the same.

The only person who handles the deaths well is the guide, and after a few replays you begin to understand why.  You, like him, have to make peace with the reality that at least one member of your party is destined to die this night.  No matter how hard you work or how many different options you try, that reality is never going to change. Your heart hardens and the deaths impact you less and less each time they occur, even though the characters always experience the pain full-force.  Deep down, you know that salvation for them is a futile endeavor. But you can’t help wanting to fight for it all the same.

Lake of Voices is available on Steam and itch.io for free, and I strongly recommend you picking it up.

Fallout 3, The Outer Worlds, and the Megaton Problem