The enemy in Cultist Simulator is not the constabulary, no matter how much they hound your every move. Nor is it the monsters and murderers that guard the secret places in the world. Even the voiceless things you summon in febrile rites shouldn’t be your main concern. All of those things are obstacles, to be sure, and if you let your guard down, many of them can kill you; but the real enemy in Cultist Simulator is Time.

The interface is simple enough: there are a number of cards spread out over a table and a number of buttons you can drag the cards on top of. The cards represent anything: resources such as Reason, Passion, or Funds; cultists you can order around; locations to explore; eldritch tomes to pore over, etc. Each button stands for a verb: Explore, Study, Work, Dream. Drag an applicable card onto a button, and a timer starts, at the end of which the action will be resolved. More than one button can be active at a time, so you might be simultaneously Studying an ancient tome and Dreaming of a way deeper into the dreamlands. Cards can only be used one at a time, however, and often are either consumed or temporarily exhausted by use.

The same card does different things when placed on different buttons: Drag a Health card onto the Work button, and you’ll work down at the docks, lifting heavy things in exchange for a pittance of funds. Drag that same Health card onto the Explore button, and you’ll spend an afternoon searching the city for interesting things and people. Much of the game is thus about managing your limited pool of resources while experimenting with how the different cards interact with the verbs and one another.

Many of your cards have timers on them and will fade away or change if the timer runs down. Ignore it too long, and Restlessness will curdle into Dread. Dread, left alone, may simply fade away, or it may be incorporated into Despair, and too much Despair will kill you. A Hapless Prisoner left in his cage will eventually turn into a Human Corpse. Great visions of terrible vistas or hidden truths, powerful if harnessed, eventually fade away entirely, as though you’d never seen past the veil at all. And hovering above it all, omnipresent and inescapable, a button marked Time Passes, eating one point of Funds per minute. Run out of the Funds it demands, and you will waste away and die.

It’s for this reason that you must have a day job. It’s a long time before your nascent cult or your writings about the occult can generate any significant Funds. Until then, you use the Work button to slave away at a desk or perform back-breaking physical labor that may leave you injured. Many jobs expect you to show up regularly, and if you allow the timer on your job card to expire without using it to Work, you’ll either lose the job or at least have to talk your way into keeping it in a lower position. The timers are short, and since there are so many other, more interesting things to do, it’s easy to forget to go to work, getting so enraptured by your Dreaming that you completely forget to drag your job card onto the Work verb in time.

I don’t think I’ve ever played a videogame where you could forget to go to work before. Cultist Simulator is about running a cult, but it functions surprisingly well as a metaphor for a struggling artist or writer trying desperately to keep his head above water while also making time for the art that makes his life worthwhile. Jobs that pay well enough to give you some spending money also use up one or two Reason cards, even if you might rather spend those cards analyzing forbidden lore or navigating the labyrinths of the dreamworld.

Dragging a job card onto the Work button is how you show up to your day job, but other cards will allow you to perform the horrible rites that summon voiceless things to do your bidding. Dragging a Passion card onto Work is also how you paint, one of the only consistent ways to gain the Contentment necessary to stave off Despair. Time thus sometimes prevents you from both working to feed yourself and enjoying your creative side. Effort and resources you’d like to pour into your “art” are instead spent keeping your unreasonable boss from firing you over a perceived slight.

I’ve only “beaten” the game once. I’ve been arrested twice, given into Despair once, and once I made a deal I didn’t fully understand, which I found myself regretting. But once I made it all the way to the end of my terrible goal and gained an everlasting enlightenment. Each run starts differently: You can be a detective, or a penniless hospital worker, or the heir to a fortune. In the time I made it to the end, I held a position at an Institute, which meant that I had access to a steady job that paid relatively well and, most importantly, allowed me to go to work entirely on my own schedule. 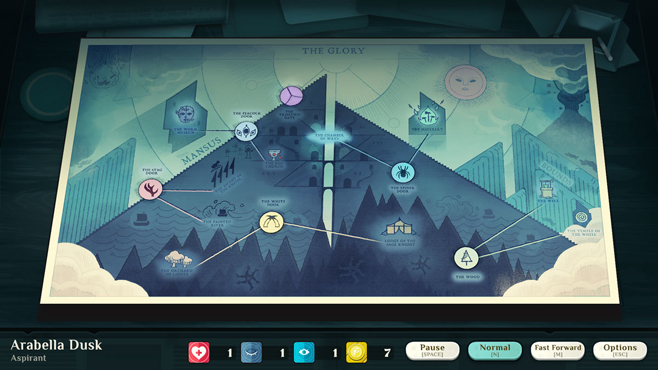 This freed me up to worry about things other than steady employment—if I got caught up worrying about the fate of my followers, off on an expedition into a forgotten and dangerous place, I didn’t have to worry that by forgetting to go to work, I might lose my job. (In an earlier game, I lost my job as a police detective because I completely forgot to go to work on time, and then forgot to explain myself in time.) If I needed to take a few days off to paint in order to stave off Despair, my job didn’t seem to notice. I don’t think it’s a coincidence that this last game was the most successful one, freed as it was from the petty fear of accidentally starving to death or angering a boss if I didn’t have enough Reason on hand when I went to work.

At first, I took the name of the game for a joke, a vamp on Goat Simulator, which is not a very good simulation of what it’s like to be a goat. But the name of the game is everything, really: The game is about modeling exactly what it’s like to be the sort of person who forsakes the ordinary routes in life and tries instead to reach for something hidden and horrible. This game models founding a cult the way a flight simulator models flying a plane. Who founds an illegal cult dedicated to forbidden knowledge, and why?

Well, if you get to an ending, whether one of great and terrible enlightenment or just slow starvation, the button cracks open. The interface breaks, and you’re free from the unrelenting march of Time. The achievement text for the three victories all ends with the same phrase. Mine was “I walked behind the watchman. I will never grow old.”