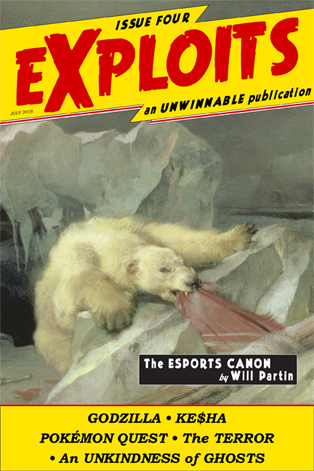 This is a reprint of the featured essay from Exploits #4, our magazine dedicated to the culture we love. If you like what you see, grab the magazine for $2  or subscribe to never miss an issue (note: Exploits is free for subscribers of Unwinnable Monthly).

In some cases, it’s easiest to go literal. Lily Allen’s “F You” uses incredible directness: “Cause we hate what you do / And we hate your whole crew / So, please don’t stay in touch.” There’s the buoyant optimism of the All-American Rejects “Gives You Hell,” which wishes the listener receives all of their hopes for the future and that they taste like ash in their mouth. Go too subtle, and you may end up with a generation unknowingly viewing your kiss-off as the perfect song for graduation videos (“Good Riddance,” by Green Day).

All of these have the benefit of anonymous figures, unknown women buried in the history of the songwriter, who have wronged them in some way.

What do you do if everyone knows who you’re talking about? What do you do if it’s not some golddigger who broke your heart, but a man who carefully groomed your party girl image so that he could turn you into a pop hit-making machine? Who constructed that image to make you a “bad victim” and repeatedly abused you, who’s protected by a web of contracts so that if you utilize your talent you will be directly benefiting him?

Kesha’s back catalog is full of the party girl songs that made her famous. She brushed her teeth with a bottle of Jack. She told her Animals (her popstar nickname for her fanbase) to live like it’s their last night alive. Her work points to a predisposition towards poppy dance numbers, not even something that exercises her voice, and a kind of exuberant opposition (the title track from the album Warrior requests that her Animals “Shoot the lights out with a machine gun”). A rage filled song about her saga of confronting her rapist in both the court of public opinion and actual court, would hardly be out of her character.

Rage is an easy emotion to write, a kind of vitriolic expression that pours openly from you, like attaching an engine to your arm and letting the emotion power it until the feeling is on the page. It’s the feeling that drives most pop hits for “fuck you” songs. It’s almost entirely absent from “Praying.”

“Praying” is easy to dismiss as a ballad. It’s a showcase for Kesha’s voice, undoubtedly, and it’s a song about praying. Kesha herself has said that she finds praying meditative, and there’s a similar sort of emotional rise throughout the song towards its catharsis.

When she reaches the conclusion, before her final repetition of the chorus, it’s powerful. After a song of extolling that forgiveness can be found on your knees before God, that while her abuser has hurt her in ways that she hasn’t even begun to publicly explain, that she has found herself hopeful in the face of adversity she delivers this line and it’s a punch: “Some say, in life, you’re going to get what you give / But some things only God can forgive.”

You had better hope that a higher power is ready to someday forgive you, it says, because I am not.

The Ticking Clock in Cultist Simulator