Two worldwide flooding events, each raising sea levels by numerous feet in just a few years, have left much of New York (and other coastal cities) underwater. Boat traffic now jams the waterways where roads used to be, and buildings in Lower Manhattan often collapse after enduring decades of rising waters without sufficient repair or maintenance. Real estate speculation remains rampant, but it moves further and further uptown, where prices have skyrocketed, leaving those who’ve lost homes downtown without affordable housing options.

This is the setting for Kim Stanley Robinson’s New York 2140, released in 2017. It’s a future in which climate change has transformed geographies, but the fundamental inequalities of the present-day persist.

The plot of New York 2140 follows a group of New Yorkers – some software engineers, a couple of young teens, a property manager, a police officer and a bunch of others – that finds itself working together mostly through happenstance. Initially, these people help each other to get through desperate situations, but later the team develops into a political alliance with much bigger goals. By the novel’s conclusion, they’ve helped facilitate a serious challenge to the status quo that had immiserated so many for so long.

New York 2140 is not just focused on capitalism generally, though. Capitalism can exist in a whole range of forms, and Robinson names neoliberalism specifically as the dominant governing ideology across the globe in the 2140s, implying a constancy of political and economic circumstances for something like 160 years.

In the real world, however, neoliberalism might not make it to 2140. There are plenty of signs that it’s on its way out the door already. But this isn’t exactly cause to celebrate just yet. What’s currently replacing it – an incipient fascism – is worse. In the 2010s, governments have shifted priorities away from those of the (miserable) neoliberal consensus of the previous few decades. The current US administration’s fixation on trade wars, for example, is at odds with neoliberal expectations. The same is true of this government’s ruthless assault on immigration – already a precarious, dangerous proposition for many who attempt it. 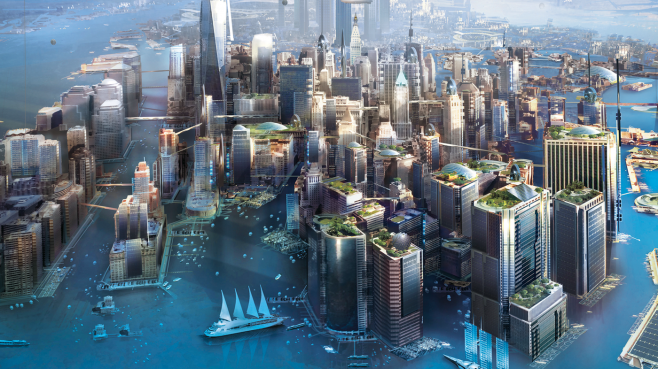 So when Robinson details the ways in which activists and progressive politicians worked together to usher in a new era, declaring that “the neoliberal order was overturned” in the 2140s, it sounds in a slightly strange register. An alignment of reactionary world powers is already working to overturn the neoliberal order, and the impacts of climate change have the potential to make things far more volatile than they are even now.

Robinson has written many millions of words of speculative fiction over a career spanning five decades, so I don’t think the issue here is a lack of imagination. Instead, in New York 2140, Robinson seems caught somewhere between depicting the unthinkable (apocalyptic climate collapse) and keeping things grounded in contemporary political economy. Sea levels in this future are 50 feet higher than they are today, but the geopolitical order has remained largely consistent; governments and the global economy are stable and exist in ways someone from 2019 would recognize. The response to systemic inequalities follows a similar trajectory. Structural change in New York 2140 grows out of nonviolent organizing efforts that propel a major push to elect more progressive candidates to local and federal offices. The public finds its political voice in the form of civil disobedience on a massive scale, and, thanks to key allies in Congress, achieves success in securing things like universal healthcare.

If this feels a bit familiar, though, that might be the point. Robinson’s work seems motivated by a desire to identify potential ways forward in our own time, not just to hypothesize the dramatic impacts of global warming in the next century. With New York 2140, Robinson is announcing a few of the ways he believes progressive political change can occur, and he wants to encourage readers to engage in the activities he’s depicting. Through sustained presence in public spaces and at the ballot box, Robinson sees opportunity, even hope.

This has admirable intent, but it also creates an underlying tension throughout the novel. It’s the tension between trying to imagine new futures and trying to write something that reflects back on contemporary politics in an inspiring, even actionable way. New York 2140 is filled with inventiveness about the technologies of its future, and about the kinds of small-scale solutions people might create in response to the difficulties of a world remade by global warming. That the political world around those changes is not so different from our own reflects a challenge facing anyone writing science fiction that wants to engage directly with contemporary politics.

People will certainly try to exploit the effects of climate change to accumulate wealth and power in the future, much like Robinson envisions in New York 2140. But whether or not neoliberalism remains the dominant paradigm for enabling that exploitation is a different question. What seems more likely at the moment is that many of the politicians, corporations and business leaders who proclaimed the value and virtue of the neoliberal way will quickly adapt to the far-right norm now taking shape, because objecting to it would put profit margins and clout at risk. Which means the politics of the 22nd century might look quite a bit different than we currently anticipate.

Diary of a 1st-Time Interactive Fiction Developer – Part 78: Skip to the End