It’s well documented that Mass Effect: Andromeda is not the game it should have been. Internal strife, various staff departures, and a rushed schedule due to delays and setbacks produced a product that was less than what most people expected. Three months later, some of the animations are still janky, there’s still mission ending bugs, and I had a conversation with a black screen. What’s really changed since its release and now is that I’ve finished the game.

While it’s clear that corners were cut and changes were made what’s also clear is that at least one person remembered that Mass Effect was great because its characters were weird outcasts forced together by destiny. To that end, no scene illustrates this better than the conclusion of the quest Movie Night. That’s right, the best part of Mass Effect: Andromeda is a fetch quest that takes hours to finish.

Once you recruit the aristocratic squid-cat to your team one of the other squaddies will start musing about how neat it would be to have a movie night. Okay? I guess we can take a break from being the only hope for what might be the only survivors of the Milky Way to do that. Several hours, movies have been acquired, snacks, better snacks, a better AV system, booze, and a better film later you can sit down and watch a part of a movie with your space pals. It’s amazing.

It’s Mass Effect: Andromeda’s single greatest moment, in fact. My major criticism of Andromeda is that it feels like a mostly empty game punctuated by short action sequences. Though people keep talking about danger and living on the razor’s edge there never seems to be any real threats.

The conclusion of Movie Night is perfect in that it occurs in the eye of the storm. The crew gather to watch a bombastic action movie right before flying into one themselves. The writers carefully give each crew member their one liner. We’ve all done movie night, there’s not enough chairs, people sit in the floor, couples sit together, people switch spots. 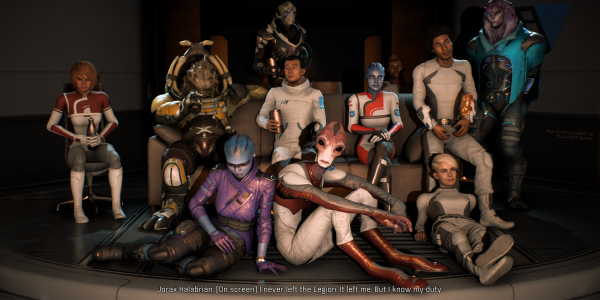 Then someone calls bullshit on the movie. Someone doesn’t like the campiness of the movie so Ryder and another volunteer to show them how it’s done. The player gets a choice. When it goes badly it’s a beautiful moment of scenery chewing that’s nearly ubiquitous in games. When it goes well for a moment the danger of what the crew is about to do crystalizes. They could fly off into the unknown and be wiped out, never to be heard from again. More likely, they’d die horribly in each other’s arms as the horrors of Andromeda took their toll.

The audience claps or jeers, the movie goes on.

Movie Night is beautiful because it makes good everything good about Mass Effect. In a way, it’s the most Mass Effect mission. A prolonged journey with low stakes that’s slowly revealed to be the emotional center of the entire experience. None of the missions are worth anything in isolation but together everything feels right.

As the film draws to an end the camera pulls back. Clearly, it was a long movie.  Someone is leaning their head on Ryder. Other characters are cuddling. An old Hollywood style score swells, something like people imagine plays at the end of Casablanca. Fade to black.

The Mass Effect Issue: At All Costs
Previous Post