E3 2017 was a whirlwind of games, technology, Twitch partners, huge fucking posters of Far Cry 5, hype people, literal orcs, figurative orcs, deafening music and more. There was no shortage of excitement to be had on the show floor, with dozens and dozens of games to be played. But, for my money, the standout event took place outside the convention center in the much quieter Novo Theater where a series of panels from industry insiders played host to an audience of a few hundred.

The variety of topics covered by two days of panels was impressive; there were discussions about everything from the new God of War to a Crash Bandicoot studio reunion. There was even an incredible panel discussing world building in fiction hosted by Chris Hardwick and headlined by Guardians of the Galaxy director James Gunn and famed internet physicist Neil deGrasse Tyson. But the true standout panel, and something I will personally never forget, was when the WWE’s Big Show interviewed Bungie CEO Pete Parsons about Destiny. 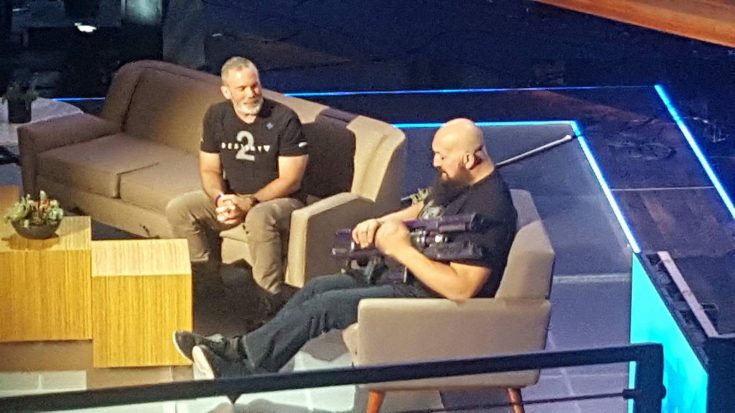 When the Big Show made his way on stage, I assumed that it was just another celebrity endorsement of a big video game release, but as the panel began I was proved wrong. Apparently, Mr. Show is an avid Destiny player, and counts himself among the game’s dedicated following. He backed up this claim with talk, spouting all manner of Destiny verbiage, like “light level,” “Vault of Glass,” and “glimmer” (please note that I am not familiar with much of Destiny’s parlance).

It was refreshing to get the point of view of someone not in the industry up on stage, but the entire panel consisted mostly of the Big Show waxing praise all over Bungie and their game, giving Parsons precious little time to actually speak. It was, quite literally, the Big Show show.

A running gag throughout the panel saw the Big Show constantly pestering Parsons for “codes” for Destiny 2. While Parsons refused to yield, he did gift Mr. Show with a consolation prize: a replica exotic gun from the game. It was a surprisingly touching moment that saw Big Show overcome with genuine emotion and appreciation.

Other highlights included Big Show mocking players of Destiny’s titan class and their sporadic use of their “fist of panic,” as well as lamenting his “giant hands” that would most likely prevent him from enjoying the PC version of Destiny 2.

E3 is chock full of developer buzzwords and jargon that us as consumers hear year after year. We watch publisher press conferences and are fed promises of the “Next Big Thing” that will change the way we play games. This is all well and good, but every once in a while it’s refreshing to hear the point of view of the fans, which Big Show unabashedly is.

The entire panel felt surreal and odd and out of place, but it was all the better for it. The Big Show’s enthusiasm and passion made him a conduit for every fan of Destiny and their love for the game. For that reason, I can’t fault him speaking over Parsons as much as he did. It would do a disservice to Bungie, and games as a whole, to stifle that kind of appreciation for the medium.

Destiny 2 Made Me Love the Grind

No Man’s Sky: More Ambitious Than We Thought?
Previous Post

The Mummy is a Garbage Movie