One of the first X-Men comics I ever read was Uncanny X-Men #109. It picks up right after Jean Grey became the Phoenix – in the thick of some classic X-Men stories. In that issue, the Canadian government’s Department H sends James MacDonald Hudson, Weapon Alpha, to retrieve Wolverine from Westchester, New York. The issue sets the stage for pretty much every Wolverine “mysterious origin” story, and it leads to the eventual creation of Canada’s premiere super team, Alpha Flight. It’s a classic issue that heavily informs the latest issue of Amazing X-Men.

Amazing X-Men #8, written by new series scribes Craig Kyle and Chris Yost, echoes those Chris Claremont and John Byrne stories in all the right ways. Storm, Wolverine and Beast are running the school, Nightcrawler is back from the dead and Colossus has just returned to the fold. But while all is right at the Jean Grey School, things are amiss in Wolverine’s homeland of Canada. When James “Guardian” Hudson goes missing, his wife, Heather “Vindicator” Hudson, contacts their oldest and best friend, Logan, to help find out where her husband has gone. What they find is a town full or Wendigos. 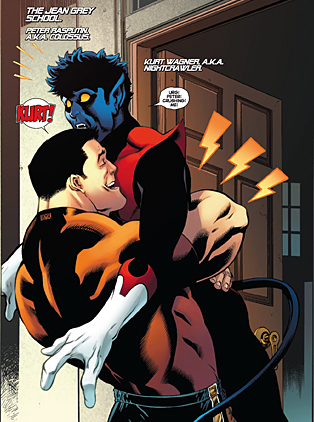 A Wendigo is a mystical monster created by the Northern gods to deter cannibalism. Basically, anyone in the Marvel Universe’s Canada that eats another person (intentionally or not) becomes a Wendigo. Amazing X-Men #8 starts with a particularly brutal murder at a meat processing plant that leads to the gaggle of Wendigos Wolverine and Vindicator stumble upon. And thus, World War Wendigo begins!

Kyle, Yost, artist Ed McGuinness, inker Mark Farmer and colorist Rachelle Rosenberg hit all the right notes in this issue. Storm is warm, confident and a little frustrated with the craziness of the X-Men (she loves these people, after all). Beast is busy with an experiment. Rachel Grey is the overtaxed resident psychic. Iceman is a goofball. Firestar is getting acclimated. Northstar’s annoyed. And Colossus and Nightcrawler? They’re best friends.

My favorite scene in this issue is the full-page splash of Colossus hugging Nightcrawler. Peter’s joy at seeing Kurt alive and Kurt’s simultaneous happiness in seeing his old friend and the pain he feels as Peter squeezes a bit too tightly are perfect. For a long-time X-Men fan, it’s great to see these two characters come together again after being split for too many years by death and ideology. The creative team nails the reunion!

Of course, Storm is concerned with where Wolverine is and she asks around the school, revealing what a wonderfully dysfunctional family the X-Men are. Yost and Kyle are coming in after Jason Aaron gave readers the X-Men as “the strangest heroes of all.” He’s a tough writer to follow, but they establish their take on their latest X-Men comic with love. They’re no strangers to the X-Men. They’ve written X-Force, Young X-Men and X-Men Evolution. Their Amazing X-Men, however, is a pure Claremont/Byrne lovefest that is paired with the perfect art team. I can’t wait to see what’s coming in World War Wendigo and beyond! 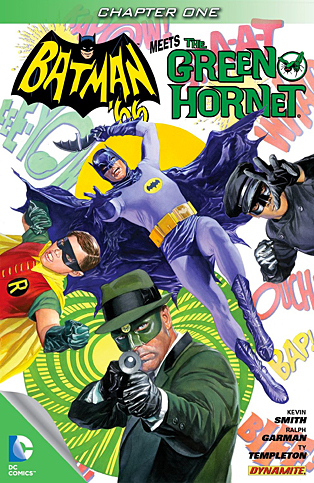 When I saw Kevin Smith’s involvement in writing this, my internal alarm went off. To say the least, I am of mixed opinion in regards to his comic book output. At times I’ve even felt burned by it, as was the case when his Daredevil/Bullseye: The Target series was never completed and Spider-Man/Black Cat: The Evil That Men Do took four years to finish its six-issue run. With his very public love of smoking weed and a penchant for dick jokes and bathroom humor, I was wary he was going to insert his voice and possibly other things into this very specific Adam West version of Batman. As of issue one of the six-issue Batman ’66 Meets The Green Hornet miniseries, it’s safe to say that the coast is clear, and that this could be good.

Written with his Hollywood Babble-On podcast cohost Ralph Garman and wonderfully drawn by Ty Templeton (with a great Alex Ross cover), Batman ’66 Meets The Green Hornet is a sequel to the two-episode crossover event between teams Bat and Hornet back in 1967 on the original Batman TV series. I remember catching the original TV crossover many years ago in reruns, but can’t say I remember too many details. Garman and Smith apparently do, as they manage to nail the dialogue between Bruce Wayne, Britt “Green Hornet” Reid and Kato. Dick Grayson is off on a date but shows up later. They even bring back Colonel Gumm, the villain from that series. He is now called General Gumm and, due to an accident with his nefarious stamps, has glue powers and a white facemask. It’s all explained in one clunky info dump that even feels out of place in a story set in the worlds of the 1960s Batman and Green Hornet series, where exposition runs wild. According to a recent episode of Fatman on Batman this reworking of the character happened because DC did not have the likeness rights to Roger C. Carmel, the actor who originally played Gumm.

This is a fun first issue that only slips up a couple of times, mostly in that one info dump scene that breaks up the flow. My main concern is if Garman and Smith can keep this up for five more issues so readers stay interested. I’ve read some standalone issues of Batman ’66 and have enjoyed how accurately they can convey a one- or two-part episode of the William Dozier Batman series in one or two issues, because these are simple stories that are meant for children. Having listened to Smith and especially Garman’s level of enthusiasm for the project, I believe they may be able to pull this off. It really depends on how long they can sustain the “Biff! Bang! Pow!” for, and how long readers wish to remain in that world for one sustained storyline. At least it should be done within a year. 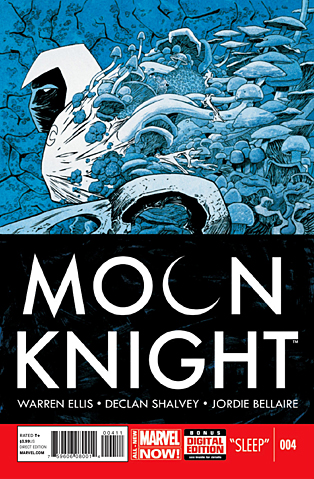 Four issues in, and Warren Ellis is still building. This is a good thing, as he’s spent these four issues of Moon Knight showing us the many sides of a character who is known for having many sides (and costumes and personalities). This issue sees Marc Spector as dapper Moon Knight chatting with a researcher who has come into some horrible problems with his sleep test subjects. Apparently they are being attacked in their sleep. Moon Knight goes with him to a hospital that makes the ones from the Nightmare on Elm Street movies look like a nursery. He finds a dark and damp room, lies down and falls asleep. And this is where the adventure begins.

Moon Knight goes on an adventure in the dream world, and the visuals by Declan Shalvey and Jordie Bellaire are psychedelically fantastic. I’m glad that Bellaire will be staying onboard after Ellis and Shalvey end their run with issue six, as her coloring has really complimented Shalvey’s art and given this comic a unique visual flair (especially this issue). While this is another one-and-done issue that seems to end too quickly, it’s a treat just taking the journey. With only two more issues left for Ellis and Shalvey, it will be interesting to see if Ellis will continue building something for the next writer (Brian Wood), or if he will initiate something himself in the next two issues. It’s been quite a ride so far. 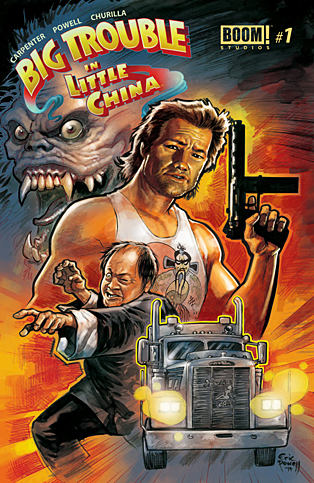 Here it is, folks, the sequel to John Carpenter’s quirky 1986 cult classic Big Trouble In Little China. Written by The Goon creator Eric Powell with appropriately cartoony art by Brian Churilla, it picks up right where the movie ends, with Jack Burton (played in the movie by Kurt Russell) declaring to that big ol’ storm, “Give me your best shot, pal, I can take it.” Meanwhile, the recently deceased villain Lo Pan’s demon buddy drops in to say hi. From there this issue is a very lighthearted return to the characters and setting from the movie. A new villain is introduced, and Burton is given his quest by the end of the issue.

I found this issue to be a little too humor-heavy at the expense of the characters sometimes, with some of those dick jokes that I was expecting in the Batman ’66 Meets The Green Hornet crossover. Still, this issue managed to be a lot of fun. The fact that Powell apparently worked on this story with John Carpenter means that this is the closest thing we’re getting to a sequel. This sequel is something that I hilariously attempted to create in my marble notebook in elementary school, after first seeing the original movie on VHS at a friend’s house. I’ve rewatched this movie endless times since the age of seven, and I know there are others who have, too. It seems like this comic is for us, although I remain cautiously optimistic in case the Pork Chop Express goes off the rails, and this becomes an evil chaotic mess similar to black blood of the earth.

Actually, in the world of Big Trouble in Little China, chaos is a good thing. Give me your best shot, pal, I can take it.