When the world is ruled by violence and the soul of mankind fades, the children’s path shall be darkened by the shadows of the Neon Maniacs.

The film begins inauspiciously, a voice over a black screen intoning a line as if from a book, before the screen brightens to the Golden Gate Bridge at night. Shortly thereafter it diverges, and becomes its own maniacal creation. It’s all the gross out gore and bare bones synth you’d expect from a slasher: the virginity of the lead brought into question, the unrelenting killers, the eighties. But while it holds court with the standards of the genre, it manages to be a unique experience all of its own.

It’s different than other slashers, than other movies of its time really, in that most of the driving action occurs in the first 20 or so minutes. Our main characters are introduced, teenagers are brutally murdered — mostly mid coitus — and the Neon Maniacs emerge from underneath the Golden Gate Bridge. The Neon Maniacs themselves are a mystery. One of them is clearly a doctor, another a samurai, and still another a cavemen. They’re like a horror movie Village People traveling through dimensions through the back of a bakery truck underneath a San Francisco bridge.

The film has the oddest progression from that initial insanity. It doesn’t ramp up in intensity, instead it continues on an incredibly slow burn that persists through the end of the film. The soundtrack is mostly smooth jazz by way of chill synth, even when someone is about to get brutally murdered. The climax, if the movie has one, is delivered during a musical number with a set of brightly colored squirt guns.

A great deal of Neon Maniacs oddness can be laid at the feet of the budget and behind the scenes scuffles. The movie is unfinished, clearly so, but still available for purchase. Somewhere, over the course of the multi-year filming schedule, they ran out of cash and instead of scrapping the project they put it together into a semi-coherent story and moved on to other projects. The maniacs are played by a several different performers, large sections of important plot details are left unfilmed, and the climax of the film never actually occurs. This leads to a very dream-like sensation across the 90 minute running time, where people move on from horrific acts in the blink of an eye and the motivations of the central villains are never actually explained.

Who are the maniacs, in their over the top outfits and clear desire to attack the virginal Natalie? Why are they living in San Francisco if they’re deathly allergic to water? Why do they have trading cards? None of their existence is explained, and they’re only called Neon Maniacs in an opening bit. They are relentless in their quest, if only we knew what their quest was. 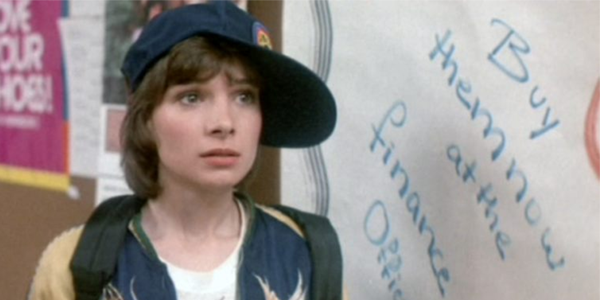 This feels more like the music-video-through-an-acid-trip world of Slumber Party Massacre 2 than it does a traditional slasher, even while it falls back on a lot of the standards of the medium. Despite its clear 80’s sensibilities, the movie feels like something that would have come out from an indie director around the same time as It Follows. The terror is minimal, the creature effects are probably the shining diamond in the whole thing, and it’s paced as if someone was more interested in the aesthetic than getting someone into the seats.

Aside from its clear value as a piece of cinematic ephemera, it’s interesting because of how charming the whole thing is. The performances of the lead characters, from the pretty girl Natalie to film nerd Paula have surprising nuance and commitment from their performers. The movie has a talented cast and crew who went on to do a lot more in the industry after the fact, including the writer for Pumpkinhead, the cinematographer for the Bourne franchise, and the on-screen debut of Andrew Divoff (Wishmaster).

Despite all of this it’s criminally underdeveloped and frankly, a must see. So few 80’s slashers manage to be any good, and this one somehow stumbles into genius simply by being unfinished.

The Slow Rise Of The Video Game Slasher