It’s 1 AM and there are paper plates raining down from the ceiling. Caught in the fire of the projector, they glow briefly white before coming down in the aisles. A second later, they go up again, caught in the perpetual fall like graduation caps of an exuberant departing class of seniors.

The movie is Plan 9 From Outer Space, and it’s the sixth movie in a long series of schlocky cult films from yesteryear. The Ed Wood classic is a B-Fest staple, and for that matter the paper plates are as well. B-Fest is a film festival put together by A&O Productions out of Northwestern University, a long-running tradition that combines all of the fun of live MST3K with sitting in one room for 24 hours straight.

The movies this year were a collection of oddities and classics, from old school black and white creature features (Tarantula), alongside a B-movie-roulette picture like Future Hunters, and concluding with the John Carpenter classic They Live.

It’s 3:30 AM. Do you know why you’re watching Battlefield Earth? Because if you thought that the John Travolta science fiction epic cum love letter to L Ron Hubbard made little sense, you were being far too kind. But somehow, and this is the joy of B-Fest, you find new ways to enjoy something as literally tilted as Battlefield Earth. A man runs across the stage as if on the Dutch-angled background, some guy next to you says out loud “Wait, is it literally just this the whole time” and you have to giggle because it’s 4 AM and seriously, did anyone think this was a good idea?

Heckling is the preferred mode of communication, and it makes everything better. In an environment like B-Fest it’s encouraged. If someone calls out a pun at the expense of Empire of the Ants, you groan because it’s awful but you also laugh because it’s great. It’s a joy to commentate this insanity every time a movie doesn’t deliver or chat in the minutes of downtime between shots about which Deathstalker 3 is the better of the few movies that hold the title. 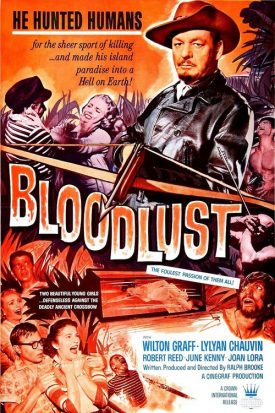 When Bloodlust turns out to be lustless and a surprisingly bloodless version of The Most Dangerous Game, the audience turns it into a game. Cue a crowd of adults, presumably sober, shouting excitedly every time someone enters the scene through a door. Do windows count? In Bloodlust they certainly do. The crowd, as much as the over the top films that they watch, is the draw of something like B-Fest. They are the extra sauce, that special ingredient that makes sitting for 24 hours in a dimmed theater feel like the wisest use of a weekend.

B-Fest is the only event that I’ve ever maligned my lack of a time machine, because surely then I could go back in time and enjoy all the previous years as much as I have enjoyed this one.

The Worst Tool in the Toolbox