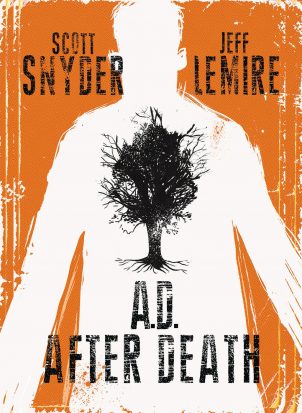 As a personal rule, I try not to go into new projects with high expectations (movies, music, comics etc.) It’s too easily a set-up for failure. If I can have low-to-no expectations (admittedly, not an easy feat) and something sucks, I’m not crushed. Conversely, if something grabs me and shakes me, I feel like I’ve discovered the secret of life.

Since I first got wind of Scott Snyder and Jeff Lemire teaming up for A.D.: After Death, I’ve had a hard time keeping my excitement in check. Snyder has set a new standard for quality Batman stories. And Lemire is all over the place these days, both writing and drawing. He’s got multiple ongoing books (Black Hammer is one of my monthly must-reads and Descender may soon be) and makes me want to spend money on comics again.

A.D.: After Death does not disappoint. In fact, it exceeds the expectations I couldn’t completely stifle. It’s a three-part mini-series (the optimal format!) about our world where death has somehow been cured. As I think about it, there isn’t more than a cursory mention in issue #1 that this version of Earth is a strange, death-free place. If it wasn’t for advance press of the book mentioning the lack of death, I would just think everyone lived for a really, really long time.

As for creative roles for A.D.: After Death, Snyder is on words and Lemire is on pictures. The two really seem to share one voice, in that they both have a good grasp on how sad, lonely kids (who are old souls) feel and react to the world around them (think Lemire’s Essex County). Both Snyder and Lemire are masterful at setting mood and emphasizing tone over action, and I think that’s a great, if unstated, selling point for Image here.

A.D.: After Death is quite sad, especially when viewed from the perspective of a young Jonah Cooke. Jonah knows something is changing with his family and tries to preserve the present through recording moments so he can listen to them in the future and feel what he felt in the past. If I were the type of person who used the word “pathos,” I’d say Snyder and Lemire have given readers characters who have pathos spilling out of their ears. Snyder and Lemire have created more than just a coming-of-age story.

The design of A.D.: After Death was unexpected. It’s over-sized, so it’s bound to stick out on your book shelf. At times it looks like an illustrated book, and other times like a comic book. The pages are beautifully water-colored. In the more narrative part of our book, paragraphs vary in shape and size, giving a poem-like experience to one’s reading. Lemire is equally adept at detailed cityscapes and sparse and focused splash pages. The cover itself has a weathered look, like an old book you maybe discovered at the library when you were a kid, and reading it, you get the feeling you’re reading something a little above your maturity level, but you “get it” and feel like you overheard a secret.

I’m curious where our adventures will take us next, and how the mysteries of Jonah Cooke will unravel. What of these mysterious (and only off-handedly mentioned) “plans?” Does Jonah have plans to change this world without death; does he have the power to do so? Where does the stolen cow fit into all this? These are thoughts I’ll be dwelling on until issue #2 hits the shelves. 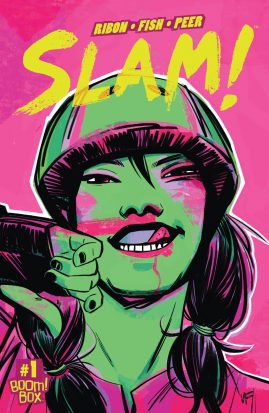 OK, I know that Slam! # 1 is two weeks old but it’s been a busy two weeks, what with Thanksgiving and the beginning of the Christmas season and all. I didn’t get to read a heckuva lot of comics but Slam! # 1 is hella good!

Both Jennifer and Maisie are missing something in their lives. Jennifer’s about to put her life back together and Maisie is looking for a change in her life. Slam! is the story of friendship. Jennifer and Maisie are two very different women who are introduced to the world of Roller Derby. Roller Derby puts two teams of roller skaters against each other in an aggressive and fast paced jam. Basically, the players are either jammers or blockers. Jammers score and Blockers block. It’s a lot of fun to watch!

Pamela Ribon’s experience as a novelist is on full display here. She’s building her characters first. There’s a story brewing, but the first issue focuses on developing Maisie and Jennifer and their burgeoning friendship. The two of them go through all the rookie bumps and bruises one would expect when starting out in roller derby. The first issue is an excellent first chapter and I can’t wait to learn more about these characters.

I’ve been a fan of Veronica Fish’s since seeing her Archie issues and Silk issues. She has a flowing yet kinetic style that captures the chaos that is roller derby while simultaneously drawing some strong character work throughout the issue. We know so much about these characters and their physicality by the end of the first issue.

Slam! # 1 is a slice of life sports comic that plays like a superhero origin story. There aren’t any death rays or sentient tyrant suns, but Maisie and Jennifer are about to embark on an adventure that could test their newfound friendship. I’ve already got Slam! # 2 on my pull list and you should too!