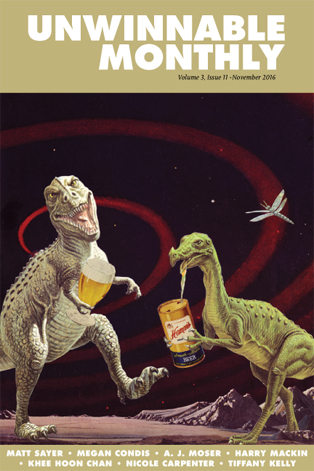 This is a reprint of the letter from the editor in Unwinnable Monthly Issue Eighty-Five, the Nonsense issue. You can buy Issue Eighty-Five now, or purchase a one-month subscription to make sure you never miss an issue!

Back in 1983, I was close to devastated to learn there would likely be no more Star Wars movies. It was difficult to parse the idea of something being over, of finality. As a result, I spent much of my youth wanting more – more Star Wars, more Indiana Jones, more of everything I enjoyed.

The thing about endings, aside of the fact that they are farewells (and no one likes to say good-bye), is that they often aren’t very good. Stephen King is the prime example of this. How many of his novels feature fascinating characters in gripping situations, only to end abruptly, as if the narrator suddenly realized they were running short on time? True, ‘Salem’s Lot ends with an alpha vampire-kabob, but the real story – the one about an entire vampire town and the threat of a country-wide vampire plague – was just getting started. But no  – gotta wrap it up folks. We’re out of time.

Honestly, how can endings be good? They aren’t beginnings, which are brief but full of promise. They can’t hold a candle to middles, which are long, meaty and dripping with nuance. Endings are brusque things by their very nature. Often, they can be summarized in one of two lines: “And they all lived happily ever after.” or “And they all went to the funeral.”

So yea, endings are for the birds.

At some point, I am not sure when, I changed my mind.

I think it might have been the long hell of the Legacy of Kain franchise, a series of games that seemed incapable of wrapping up a single story line with anything approaching decisiveness. From Blood Omen: Legacy of Kain in 1996, through the Soul Reaver games in ‘99 and 2001, a Blood Omen sequel in 2001 and Legacy of Kain: Defiance in 2003, the series always promised more, an ever-swelling crescendo. I’ve been waiting 13 years to find out how the time-traveling vampire epic resolves.

I will wait forever.

I avoided watching Hannibal, the TV series, for this very reason. Now that it is unlikely to come back any time soon? I am devouring it.

These days, I crave finality, so I can move on. This is clearly an advantage of the British model of TV, which rarely gives you more than you want of a show, and quite often winds up giving you less. Give a show too many seasons and it goes soft and pungent, like fruit left out on the counter too long.

Take the prospect of Star Wars and Marvel movies coming out yearly, with no end in sight. Yes, I am looking forward to Rogue One, but I know this is never going to stop, that our grandkids’ grandkids will have more Star Wars movies than any person can watch in a single lifetime. The thought of it is exhausting, maybe a little terrifying. Its the difference between a walk in the park and walking on a treadmill for all eternity.

Endings are a kind of freedom. If a story never ends, you’re bound, shackled to it forever.

Yet, when Laird Barron claimed to start every book by reading the ending first, everyone gasped in horror, myself included. Unthinkable. How could anyone be so monstrous?

A confession: I do this. Not for books. They still seem too . . . sacred . . . to despoil that way. Maybe I’m like a serial killer, though, working up to bigger game, because I happily seek out the endings of movies and TV shows ahead of time. I tell myself that it is to better enjoy the entirety of the work, but now that I am writing this, I wonder if it is because I want to be sure there is an ending, that I am not going to be stuck in the limbo of another story for all time.

And you know what? Whoops, hold on. It looks like I am out of space. Better wrap it up. Have a happy Thanksgiving. See you in December.