Joe Shishido is known primarily for two things: his cheek implants, which made him look somewhat like a chipmunk, and his longtime collaboration with Seijun Suzuki on increasingly strange yakuza movies.

It was with Seijun Suzuki that Shishido crafted two of the best yakuza movies in history; Youth of the Beast and Branded to Kill.

Youth of the Beast follows a disgraced policeman thrown in jail for being in somebody’s ascent to power. After being released, he begins to gradually rise through the ranks of the criminal organization responsible for the death of his best friend and partner. He busts heads along the way, acts cocky and generally does all the things that a yakuza movie protagonist is supposed to do.

What makes Youth of the Beast so good is that it’s not just a yakuza movie, but the yakuza movie. It embodies every archetype of the early films of the genre: a gangster torn between his urge to commit violence and his commitment to honor, a ruthless criminal organization, swaggering bravado that quickly escalates to ridiculous action scenes, and convoluted plots involving loved ones. There is no dull scene in Youth of the Beast, and every single action moves the story forward in some way. From a well-filmed brawl in a yakuza-run club to the downbeat climax, Youth of the Beast moves forward at a relentless pace.

Branded to Kill is a much stranger film. Shishido plays the underworld’s third-ranked hitman who, thanks to a hit gone wrong, is targeted by the underworld’s number one hitman. The cat-and-mouse chase that follows plays with both Shishido’s sanity and the expectations of the audience, and ends with every character ruined beyond repair. It’s slow and depressing and antithetical to the playful action of earlier yakuza films, but the result is an absurdest masterpiece.

The oddities in Branded to Kill are almost too numerous to mention. Shishido’s character can only achieve an erection through the smell of boiling rice, and repeatedly asks characters throughout the film to boil rice for him specifically so he can get off. His main love interest is another assassin obsessed with death, torture and butterflies. The number one assassin refuses to outright kill his victims, instead torturing them to the edge of sanity, thereby rendering them totally helpless. Shishido and his love have sex in a pile of dried butterflies. The number one assassin pisses himself not out of fear, but out of a refusal to leave Shishido alone for even a single second. The list goes on. 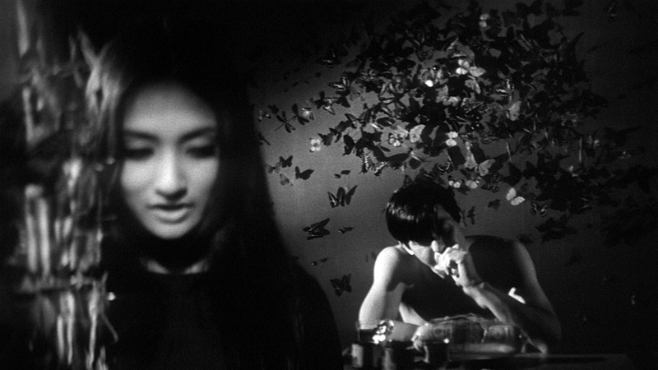 Much as in other mediums, it’s the deconstruction that people remember, and Branded to Kill ended up with the greater legacy. Jodorowsky’s El Topo, Suda51’s No More Heroes, and the careers of film luminaries such as Quentin Tarantino and John Woo owe much to Suzuki’s strange, low-budget absurdest crime drama, and for good reason, it’s a great movie.