When my roommate bought a copy of the “Gravity Falls” book “Dipper’s and Mabel’s Guide to Mystery and Nonstop Fun!”, I spent about four hours scribbling notes in it. As a child, I would be up past my bedtime, under the covers reading. Here, I reverted back.

I was up until 4 A.M., my phone’s flashlight app on, a pencil in my mouth, breaking codes. I flipped back and forth between cipher keys and other pages with hidden messages. “Gravity Falls,” while at its base it’s a cartoon aimed at pre-teens, is often less about what occurs, and what the audience thinks will happen. The answers are found in the codes. Each ending credit sequence has one. They are scattered throughout scenes. Obtuse symbols decorate the backgrounds. Of course, they’re littered through this book, too, and I know they’ll have answers to the show’s questions.

While the show has been critically praised and commercially successful for Disney XD, the Internet has always been the show’s biggest supporter. Not only because of its penchant to create fanart and alternative universes, but also in how it brought people together to talk. “Gravity Falls,” for how straightforward it seems in premise (a coming-of-age tale about two siblings unraveling the secrets of their family), is cryptic in its delivery, and it thrives thanks to intermedia crossovers in books, videos, and, of course, the codes.

Creator Alex Hirsch and his team utilize ciphers used by codebreakers, including the Atbash cipher (reverse the letters) and symbol substitution ciphers. The audience then has the chance to see what the show is hiding. 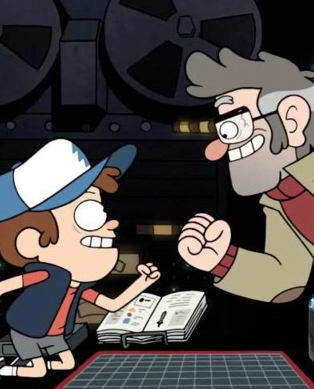 At first the puzzles are fun to crack. A time travel episode early in season one, for example, would have a message that when deciphered, says “Not H.G. Wells Approved.” However, once the Big Bad, Bill Cipher, is properly introduced at the end of season one, it becomes important to note just what the show is trying to tell you.

Cipher, without context, is non-threatening in appearance, but he’s manipulative and dangerous, with the potential to bring about the end of the world. He also leaves little messages like this in the credits of an episode that involved him taking control of one of the twins:

“No puppet strings can hold me down
So patiently I watch this town
Abnormal soon will be the norm
Enjoy the calm before the storm.”

The book, in a lot of ways, was hijacked by Cipher; there were codes printed on multiple pages, with symbols crammed in the margins of chapters on ghost hunting, or how to have a sleepover. In the back, there was an extra code that lead you to a secret website to find the substitution key.

Some of the messages were innocuous (“Dipper wrote a theme song for himself and sings it in the shower”) but others were more spine-chilling.

“The end of the world is closer than the end of summer.”
“Trust no one.”

The Internet was abuzz with what these meant. What were the fates of the characters? Who was behind everything? What was Bill going to do? The messages gave life to the journals that characters carried around that supposedly held all of the show’s secrets, and the supporting cast that would hold meaning later.

As fans go into 2016, waiting for the series finale on February 15th
, there’s even more to theorize about. Even after the show ends, there will be even more questions. But it’s all a part of dedicating yourself to a thing like “Gravity Falls.”