It was one of our impromptu movie nights, crammed into someone’s prison cell-like room in one of the university’s residence halls, and something wonderful had just happened.

I just saw a zombie fight a shark.

I repeated this fact out loud a couple of times. More than anything else, I was seeking confirmation that everyone else in the room had just seen the same thing. It was true. We had all witnessed a man dressed as a zombie fight and allow himself to be carried about in the mouth of a very real shark. It was a remarkable introduction to gory Italian horror cinema and the work of the famed director and eye-gouging enthusiast Lucio Fulci.

The 1979 Zombie Flesh Eaters (also known as Zombi 2) is perhaps the director’s best known film, with the dramatic zombie vs. shark battle and gruesome eyeball gag, which led to the film being classified as a “video nasty” in the UK. Yet, as wonderful as the film is, I wouldn’t call it Fulci’s best work.

For that, I bid you to follow me into The Beyond.

The Beyond is the second film in Fulci’s informal Gates of Hell trilogy. It focuses on a woman from New York who inherits the Seven Doors Hotel in Louisiana from her deceased uncle. The catch is that the hotel is situated on one of the seven portals to hell. As you can imagine, this leads to all manner of hijinks. During a recent re-watch, I was struck by the inescapable feeling that Lucio Fulci had manufactured something more akin to a modern videogame than any kind of coherent film.

The Beyond is Fulci’s exploration of the blurred border between the world of the living and that of the dead. It is appropriate that I have to straddle the critical theories of two mediums to make any sense of the action on-screen. 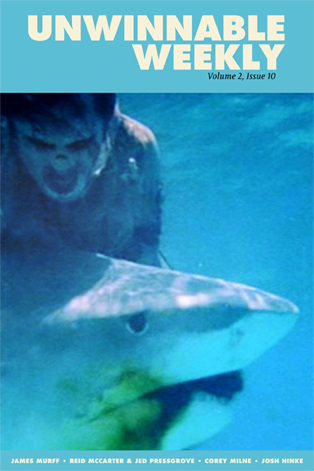 The film doesn’t have a coherent plot. Rather, it has a single plot point: a woman inherits a hotel, around which sinister events simply happen. The easiest way to describe The Beyond is as a series of random acts of senseless violence. This bears more than a passing similarity to the structure of many videogames. Grand Theft Auto 5 has high narrative ambitions which quickly take a back seat to player tomfoolery. Shadow of Mordor might attempt to have a robust narrative, but it’s really an excuse for players to murder orcs in increasingly horrific ways. More often than not, videogame narratives exist to encourage disparate segments in which violence can occur.

This is also true of The Beyond. It starts with the crucifixion of a man who may or may not be an ungodly warlock. Handymen renovating the hotel are struck down with alarming swiftness. The plumber loses his eyes, a woman has her face melted off in a freak lab accident and a blind woman’s guide dog turns on its owner. An interior designer is eaten alive by a swarm of tarantulas after a fall from a ladder, precipitated from a freak thunderclap that paralyzed him.

You’ve been reading an excerpt from Unwinnable Monthly Issue 62.

Riding in the Wasteland

Mad Max, Now More Than Ever

Through a Lens, Digitally

On the Lunacy of the Groom’s Cake – UW63