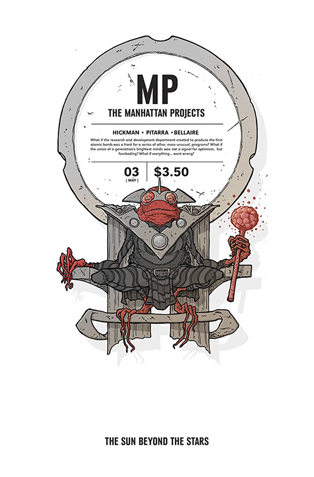 Manhattan Projects: The Sun Beyond The Stars #3

Manhattan Projects: The Sun Beyond The Stars #3 is a fun bridge issue when broken down to its smaller parts. As a whole it’s a bit unfocused, for both good and bad reasons. While I appreciate this trip down a side road of the Manhattan Projects universe, I’m wondering if there’s a destination planned for the quirky crew of this side series.

So let’s explore the good and bad of why this issue is unfocused, which mainly lies on Jonathan Hickman’s writing. It often seems like Hickman enjoys indulging artist Nick Pitarra, letting him go buckwild with spreads depicting acts of gory violence, insanity and/or depravity, or whole sequences that go on for pages depicting that. When the characters involved in these sequences were people who actually existed in our history it added a surreal and wicked twist to the proceedings. Now it’s more focused on the debauchery of the weird alien inhabitants of theManhattan Projects universe, which sometimes works for comedic purposes and sometimes just feels like time wasting is going on. When Hickman is expanding on this universe with added chuckles he’s great, like a more debauched Douglas Adams writing for Image Comics in the 21st century. When he’s simply indulging himself and Pitarra it’s sometimes not so great, like he’s basically making the page count and amusing himself.

Still, Nick Pitarra comes through as the driving force of Manhattan Projects once again. You can tell that he just enjoys going as far out as he can with his character designs, and the little details and easter eggs in his backgrounds always bring me back to rereading each of these issues over and over again. Just look at all the various robot parts from throughout pop culture history in the sequence when Yuri is reassembling Una, his lying jerky robot crewmember.

Ultimately my fears may be unfounded, as this is just the third issue in what is a series with no set end. There’s groundwork being laid down, fun and diverse characters, repulsive villains literally sucking on even more repulsive villains for knowledge, and some crazy world building going on. There never was any guarantee in the original Manhattan Projects that any of the main characters were going to make it out of this alive, but I’d like to see more development with these characters to make sure that this is not the case, especially since Blarg the floating head started talking coherently in this issue! Although I honestly hope things don’t go in a certain direction with Yuri and Laika the now humanoid dog. She rejects him in this issue so that doesn’t seem to be the case, but Hickman has done some pretty depraved things in the past with storylines in this series.

At this point it’s hard to tell what the motivations for the team behind Manhattan Projects are. It’s a series with a dedicated fanbase, and you can tell that Nick Pitarra has a blast with the visuals. Still, I get the impression that writer Jonathan Hickman may be turning on the autopilot sometimes. I’m still enjoying this series a lot, and some Manhattan Projects is better than none at all, but it still seems like Hickman’s interests are elsewhere being that he’s a man of many projects. Since this is an issue by issue review setup around here this whole particular criticism of mine could be entirely moot further down the road for this series. Overall it’s still a fun and worthwhile read. 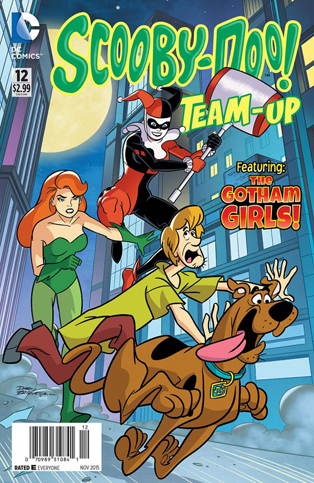 Scooby Doo Team-Up is one of the most delightful comics on the stands. It basically takes place in the New Scooby-Doo Movies continuity, so Scooby, Fred, Daphne, Velma and Shaggy already know Batman and Robin.. I’ve been reading since the first issue (as long as my shop had it in stock,that is). Whether the Scooby Gang joins forces with Wonder Woman or Secret Squirrel, the book never fails to entertain. The series feels like a love-letter to Warner Bros. Animation and this issue harkens to an all time great – Batman: The Animated Series.

Scooby Doo Team-Up # 12 is a caper that features a team up between the Scooby Gang and two of Gotham City’s most infamous femme fatales, Poison Ivy and Harley Quinn. See, Harley and Ivy stole a priceless gem recently. They’ve been plagued by a string of bad luck ever since. Of course, the logical conclusion is that that the bauble is haunted. Harley and Ivy then coerce the gang into helping them track down the phantasmagoria.

Sholly Fisch’s script is as whimsical caper that captures the common humor between Harley and Ivy tales and a classic Scooby Doo yarn. Artist Dario Brizuela’s style evokes both classic Hanna Barbera animation, but Harley, Ivy and the other Batman TAS characters that pop up fit in perfectly while still maintaining the a visual continuity with Bruce Timm’s design.

Scooby Doo Team-Up # 12 is a fun Harley and Ivy caper with the Scooby Gang. If you’re reading this column, chances are you’ll dig it. This review is for the print issue. The first half of this story also available digitally as Scooby Doo Team-Up # 23.

Gazing into the Beyond