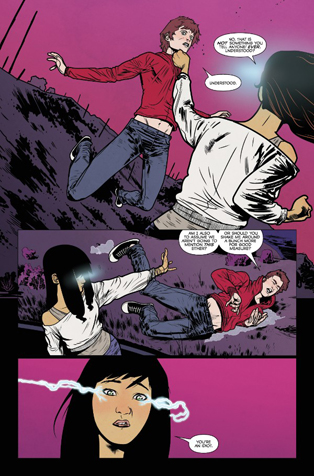 OK, so this is really a Next Week’s Comic review as We Can Never Go Home # 1 hits the stands next week. Black Mask Studios sent us a review copy though and it blew me away. I called my shop and asked them to put a copy aside for me and I urge you to do the same.

We Can Never Go Home # 1 revels in the bleakness of an adolent outsider’s life. Rosneberg, Kindlon, Hood and colorist Amanda Scurti deliver an unflinching and emotionally honest portrayal of high school crushes, mixtapes and superpowers. The series is billed as a love letter to crime road movies. It’s the story of two high schoolers – popular girl Madison and loser freak Duncan.

Both characters exist on two separate ends of high school social strata. Madison dates a football player, she has the lead in the school play and she has stellar grades. She gives the impression that she’s aloof but that facade fades pretty quickly. Duncan lives in a ramshackle house. When we first meet him, he’s mumbling to himself while shooting cans at the local makeout point. He also really likes Hüsker Dü .

The first issue explores Madison and Duncan’s growing relationship. They share a secret, Madison has superpowers. The secret brings the two closer together as they navigate their way through high school cliches.

Then things go sideways for Madison and Duncan. Their lives fall apart and they can never go home.

I enjoy the hell out of Rosenberg and Kindlon’s post-apocalyptic webcomic, Menu. The thing about Menu is that it isn’t published in any particular order. The world has gone to shit and it will be shit for the entirety of the main characters’ lives. It’s a bummer of a comic but their story execution nails the dire tone perfectly. We Can Never Go Home feels like it’s going to have a similar tone.

We Can Never Go Home # 1 is a promising start to a bummer of a ride. It’s so clear that these all too human characters are on a road that’s going to rip and claw at them the whole way but I can’t help but wait for their next move. The issue hits the stands next Wednesday, 3/25/2015. 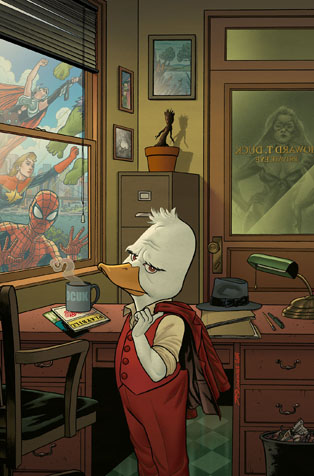 I was not able to get the theme from the Howard the Duck movie out of my head while reading this comic. It’s strange, because that movie is so bad and destroyed what was once one of Marvel’s beloved and preeminent characters. If it wasn’t for a recent cameo in Guardians of the Galaxy this comic probably wouldn’t exist. But it does, it casually acknowledges how bad the movie is, and overall it’s a lot of fun.

Still trapped in a world that he never made, Howard finds himself locked up in a jail cell at the beginning of this issue. From there we see that he’s now a private investigator, and has made an appearance on movie screens, but not in the way you think. Howard is also office neighbors to She-Hulk, which already in this issue sets itself up for some wonderful situational comedy. As a fan of Charles Soule’s recently canceled She-Hulk series it’s great to see that her world will be playing into Howard’s monthly hijinks.

Chip Zdarsky does a wonderful job filling the shoes of the late great Steve Gerber, the creator of Howard. Gerber always described Howard’s adventures as being existentialist, and by the end of this issue you get a sense that Zdarsky feels the same. He succeeds in taking the reader through a series of wacky disorientating events that really should not be linked together at all. It’s a true sign of Zdarsky’s success writing this book that he manages to make it so witty that you forgive him for Howard’s duck pun-laden dialog. My only complaint is that there is a lack of the social satire that Gerber excelled at, but it’s only the first action-packed issue so it’s easily forgiven.

The artwork by Joe Quinones is the right blend of cartoony and realistic. With all the guest stars in this issue he manages to throw in little visual gags that beg for repeat viewing. One in particular with Spider-Man that evokes a famous cover of his comic cracked me up. It’s a wonderful compliment to Zdarsky’s humor and the two play off each other well. Quinones also draws wonderful facial expressions, which is essential in a comic where mostly everyone is constantly reacting to the ridiculous sight of a talking duck dressed as pulp novel P.I. from the 1940s.

“Ridiculous” is a key word when discussing Howard The Duck the comic and Howard the character. Gerber used to use him as a sounding board to comment on the ridiculousness around him. Not only the world of Marvel, but the world of us the reader, and the comics industry in general. Gerber was capable of doing that while also keeping the book fun. With this comic Zdarsky and Quinones show that they are more than capable of bringing the fun. I’m really looking forward to where they’re going to take us. 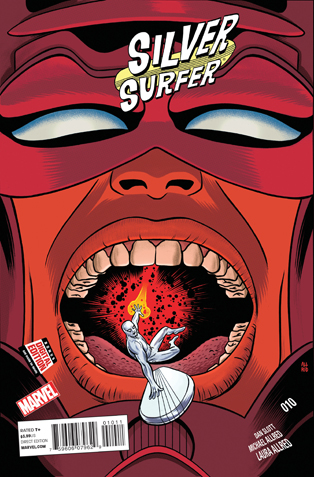 I’ve been holding off on reviewing recent Silver Surfer issues until the storyline with Galactus resolved itself. With this issue it does, and I was not disappointed. While Slott generally keeps things light with this issue he shows that he can bring the dramatic weight that is needed in a Silver Surfer series.

There are legendary hero/villain pairings in the Marvel Universe. Reed Richards and Doctor Doom, Spider-Man and the Green Goblin, and Silver Surfer and Galactus. What’s so fascinating about their relationship is that Galactus is not so much a villain, but a force of nature. He is a god-like being who created The Silver Surfer, so the Surfer can never defeat him on his own. What Galactus does is heinous, but it’s necessary because that is the nature of the universe. The Surfer will never stop him, but he can at least save the lives of those threatened by his actions. It’s this that we see play out in this storyline.

In only a few issues Slott succeeds in making us really care for the fate on the inhabitants of Newhaven. You feel their loss, and marvel at how they can go on living. You also see things from Galactus’s angle: he needs to survive and eating planets is how he does it. It’s unfortunate that there are often living things on that planet that die, but as Dawn and the survivors of Newhaven discover they don’t have to die. At the end of the day the Silver Surfer can only do so much, and what he needs to concern himself with is saving lives.

It’s interesting to see how many super heroes in recent film adaptations don’t save lives. This is especially true in Man of Steel. In a way Slott is commenting on this either intentionally or unintentionally with this story arc. While the battle between the Surfer and Galactus is epic (and wonderfully rendered by the Allreds), by the end the Silver Surfer realizes that he can’t stop nature, and especially death. He did it once on Zenn-La, saving his people. But then he helped cause the deaths of billions of others. Since becoming free of Galactus he’s now trying to atone for the death and destruction he helped cause, and save as many lives as he can.

By the end of the issue the Surfer is a herald once more, but in a different way. You’d think that this would be a tired story to go back to, since it’s been told a multitude of times in the last 50 years. It really shows how great of a job Slott and the Allreds are doing with this comic that they’re able to show us a different fascinating angle to one of the greatest hero and villain/parent/god pairings in the Marvel Universe.