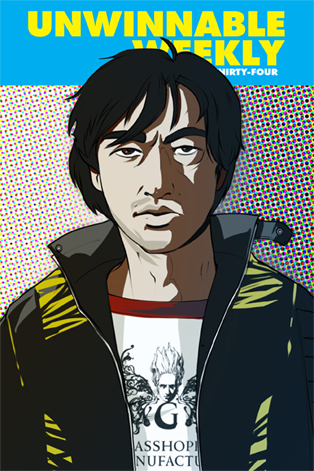 Loosely inspired by Andy Sturdevant’s “A Speculative Wes Anderson Filmography,” this essay extrapolates the vivid and lively career of videogame developer Goichi “Suda 51” Suda from 2015 to his death in 2051.

DEATH or Glory (2015)
Enjoying an auteur status with Grasshopper Manufacture and a solid publishing track record, Suda 51 retains total creative authority over his craft. Following up the motley reception to Let It Die, a game that critics remarked on its imaginative-if-mismanaged death mechanic, Suda continues his penchant for mortality motifs with DEATH or Glory in 2015.

Chronicling yet another story of hitmen, Suda flavors his violent tale with an overtly punk rock aesthetic set in 1980s London. Largely scored with miscellaneous oddities from The Damned, Sex Pistols, The Clash and Buzzcocks, DEATH or Glory proves to be an exhilarating, energetic experience. Nevertheless, critics remain dumbfounded by the game, finding themselves ill-equipped with the language to analyze it.

Many voices compare it to Dark Souls but without much justification why. “As the scythe-wielding Judy Ramone, I find myself locked in constant death set to the gloomy post-punk dirges of The Smiths. It’s a punishing, unrewarding affair that probably means something to Suda on a profound spiritual level, but absolutely nothing to Little Timmy browsing the selections at his local game store.”

The scattered praise it does receive falls to its unique artistic direction equal parts pop art palimpsest and punk rock debonair. Its cutthroat hack-and-slash gameplay with unrivaled scythe mechanics is widely acclaimed, with many fans dubbing it as Suda’s offbeat response to Bayonetta. Nevertheless, a handful of discerning critics note the game’s shortcomings in relation to Platinum Games’ equally eccentric hack-and-slash: “The female characters are poorly written.”

Irresponsible fund allocations result in the game’s superstar voice actor Troy Baker performing the roles of every single character. A number of highfalutin reviewers mistake this setback as a commentary on the lonely, solipsistic lives of masked wrestlers and their inability to form identities outside their masked façades.
Inversely, an excess of juvenile YouTube personalities ridicule its execution.

No More Heroes 3 (2020)
Approaching imminent collapse and financial ruination, Suda 51 and Grasshopper Manufacture revisit their commercially prosperous No More Heroes franchise as a last resort to stimulate revenue back into the studio. The long-anticipated sequel eschews all narrative continuity, salvaging only the previous games’ open world assassin backdrop and introducing the entirely new character Buster Himalaya.

The story amounts to a surreal mix of Buster Keaton-esque physical comedy that Suda coins as “screwbrawl comedy” and merciless swordplay inspired by Kill Bill. A soundtrack entirely comprised of incongruous surf rock and vocal samples from obscure samurai films remixed to a dubstep overture by Akira Yamaoka is surprisingly lauded, leading to a poignant victory at the 2020 BAFTA Games Awards.

The Sleepwalker (2022)
Goichi Suda continues his lapse back into past accomplishments of his outlandish career with a back to basics 3D adventure game involving minimal combat. With videogame academics and art archivists digging up long lost original copies of Twilight Syndrome and The Silver Case inexplicably buried in a New Mexico desert,
public interest in formative Japanese adventure games skyrockets.

The Sleepwalker frequently alludes to Suda’s early ventures in adventure game storytelling, featuring a dreamlike murder mystery centering on a detective who advances his investigation through out-of-body dream sequences. A tighter narrative  focus loosely based on Mulholland Drive and Paris, Texas propels the story forward, as well as the neon flash of Seijun Suzuki’s Tokyo Drifter.

The Flowers of Fury (2028)
Suda commences a five-year creative exile deep in the Black Forest of Germany, only to return with a massive thousand-page script dubbed The Flowers of Fury. This mythic block of videogame text passes around elite game developer eyes for congratulatory inspection. In particular, the now veteran and secretive Fumito Ueda provides significant edits and rewrites to the text.

Months of delay encumber initial hype for the game, as difficult correspondence between Suda and Ueda emerge given the latter’s complete self-removal from public attention like the videogame equivalent of Thomas Pynchon. Ueda works feverishly to restore his professional persona following a public meltdown at E3 after relentless harassment from shrill gamers criticizing the delay of The Last Guardian and the unfortunate trend of YouTube “Hilarious E3 2027 Moments” compilations mocking his breakdown.

Endless hours and sleepless nights result in a game whittled down from its initial 700+ hour storyline to a comparably minimalist 300+ hour one. Seasons pass, empires rise and fall. The year is 2028. Jonathan Blow releases his third game to mixed reviews. The Wii X opens to lukewarm response from middle-aged parents unsure if the console is simply an addendum to the 2006 Wii platform. Suda 51 quietly releases
The Flowers of Fury.

The game opens with an extended creation-of-the-universe sequence that ultimately rests on an ensemble cast of twenty protagonists scattered around the world. After fifty hours of dry, humorless strolling through panoramic landscapes set to whispery, incomprehensible voiceover narration, the game completely unravels
into an incongruous smattering of colors and imagery.

Critics are left absolutely stumped. A notable IGN reviewer produces a similarly unintelligible review of open-ended questions given the lack of lucidity offered by  the game: “What is this? A hack-and-slash? A walking simulator? A shooty-bang? A European-style truck simulator? When I finished it for the first time, I sat on the
couch with my mind baffled and dissected the journey I had just taken. 2/10.”

Suda and Ueda are both initially devastated by the game’s bumbling disaster, envisaging their six-year effort to become the “Citizen Kane of videogames.” Roughly thirty years later, revisionist critics would rekindle discussion of the game and reconsider the poor initial reception, lauding it as the videogame counterpart to
Heaven’s Gate or Showgirls.

Old Blood (2030)
A public announcement by Suda 51 following the disastrous reception to The Flowers of Fury reveals his decision to retire after making one final swan song. Suda retreats to the foothills of rural Japan with a collection of aging game developers struggling to save floundering careers amidst a new wave of indie companies rapidly producing new genres previously unheard of: tower defense dating sim, rhythmvania, turnbased stealth racing game, jogging simulator, rogue ‘em up, hack-and-splash. This dream team of developers includes the aging Hideo Koijma, whose post-Metal Gear career produces a number of reboots and spin-offs to his masterwork, including the warmly received Steel Cog Sturdy series and the embarrassing mishap of Raiden and Otacon’s Excellent Adventure.

Hideki Kamiya and Shinji Mikami both reemerge from retirement after an applauded final collaborative hack-and-slash Resident Evil reimagining that witnesses both auteurs returning to their zombie game roots. Finally, Hidetaka “Swery65” Suehiro has been hectically releasing misfit episodic adventure games that have nonetheless been critically neglected by the industry at large, including a musical parody inspired by Breaking Bad and a comedy slasher game called Evil Bled.

Critics and general audiences discuss the game for years: “It’s an absurd concoction, a distorting funhouse that borders on self-parody. I’m not sure whether to laugh at the protagonist’s climactic two-hour death scene or put down the controller in a heartfelt moment of silence. Perhaps both at the same time.” The game sells hundreds of millions of copies, demolishing the existing world record held by the previous year’s Assassin’s Creed entry, a series whose numerical designations now rival Super Bowl numerals.

The developers behind the game enjoy numerous end-of-the-year awards, including the prestigious Jaffe Award for Excellence In Game Direction. As years advance, the cultural imagination of Suda 51 warms to that of videogames’ “cool uncle” figure. Suda dies peacefully in his plush Tokyo home in 2051, and a small vigil is held. A new wave of young, artistically assertive game developers springs forth to carry on his legacy. True to his style and idiosyncratic videogame craft, the industry continues producing unique titles with quirky narratives. As Suda once said, “It’s party land…”