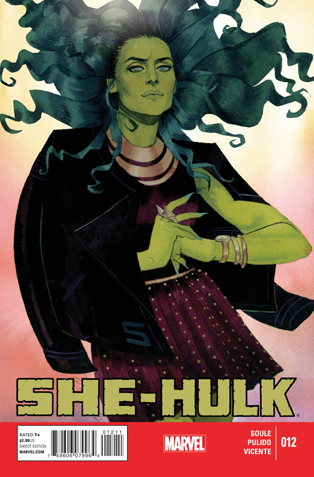 While it wasn’t a terrible issue, She-Hulk #12 was a bit disappointing. As the finale to what is now a 12-issue arc it felt rushed. On the one hand it’s great that another series is coming soon, on the other it’s a bummer that Charles Soule is supposedly done with the character for now. In the letters column he says that he told the story that he wanted to tell, and that the characters and situations from this series will be included in some of the other hundred comics he’s currently writing for Marvel.

Like I said, the issue itself wasn’t terrible, and definitely has its moments. We learn what the Blue File is, there are a couple of action sequences featuring Shulkie and friends fighting Deathwatch, the Shocker and some other D-list villains, but as a conclusion it rings hollow. It basically tells us to tune in next time for the further adventures of She-Hulk.

I really enjoyed Javier Pulido’s art in this issue. While it’s not everyone’s cup of tea I think the colorful and cartoony fun nature of it is a perfect compliment to a series about a female Hulk who’s main gig is a lawyer and only occasionally superheroes on the side. The fact that Deathwatch’s Spawn-like living cape abilities seem to extend to his formal wear is hilarious and the way Pulido conveys Jennifer’s emotions through hulking out is fantastic. You can see her frustration just from her savage physicality, without her saying “Hulk Up!” or anything like that. The fact the She-Hulk is pretty much always a Hulk in flux makes for a nice contrast to Bruce Banner’s ‘roiding out transformations.

This whole thing is just a little weird in context though. When someone hears about how great the majority of this run was and comes to this issue they may wonder what happened. It reminds me of Grant Morrison’s New X-Men run, which was for the most part fantastic but you can tell there was some production and personal issues that came into play. Marvel pulled the rug out on the She-Hulk crew, but I think in the public eye things will remain amicable since Charles Soule is an in-demand writer there.

It’s a shame though, since Warren Ellis really did pull a “this is the story I want to tell” with Moon Knight and managed to set up new ground zero for the character. With this run Soule did something similar, but it just felt like a bigger story wanted to be told and the foundation for Jennifer Walters going forward was laid down in a messy manner. There is still much to like about this series, especially the “Trial of Captain America” storyarc that I can’t stop recommending. Much like Ellis proved what could be done with Moon Knight, Soule has proven that there are many places to go with She-Hulk. Now reinstated, I’m looking forward to seeing how She-Hulk and her crew will play with the larger Marvel Universe. 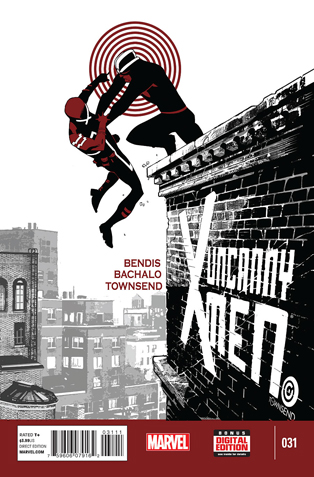 Alright, so the space-time continuum is completely out of whack in the X-books, I get that.  Now, Eva Bell is taking things even further.  She’s convinced she’s doing the right thing, but is she?

Issue #31 starts off with the return of Charles Xavier, or more correctly, a young Charles Xavier traveling from the past to the present at the request of Eva Bell to right some wrongs.  Emma Frost, Scott Summers and Ilyana Rasputin are (ostensibly) dead.  Somewhere in the middle, Storm may have caused the death of the rest of the X-Men by summoning the elements against Matthew Malloy.  Is this something big, or that old comic book sleight of hand when a company wants to kill someone off until they need that character back?

Marvel could make some serious statements if the company would ever stick with any of these changes.  Death of a major character, when handled well (Jean Grey; Jason Todd somewhat) can lead to infinite storyline possibilities.  When handled, um, not well (Wolverine; Jason Todd somewhat) can turn fans off.  Marvel’s multiple universes are on the brink of a major convergence, for lack of a better (and not copyrighted) word, so I’ll stay on the skeptical side of the line for the time being.

Turns out there is some sleight of hand in this issue, but it works in the end.  Eva Bell and Charles Xavier travel to a middle past and cause Matthew Malloy’s parents to never meet, which makes the present day change.  Suddenly, we’re back at the reading of Charles Xavier’s Last Will, and everyone is still alive!  This time, though, there’s no mention of a Matthew Malloy, or anything that may have happened in the last few minutes/days/years.  Xavier’s estate goes to Scott Summers.  Summers sulks off like a whiny teenager and is met by Eva Bell, who seems to possess all the knowledge of what is and isn’t.  She tells Summers off, to good effect.  Yes, I know she’s further eff-ing up the space-time continuum, but I like Eva Bell as a bad ass, and I like anytime anyone puts Scott Summers in his place.  Summers sulks back in, turns the school over to Storm and leaves.  If only it could be permanently…

Eva Bell is the breakout star of the newest X-Men.  Her maturation is the subject of not one, but two X-Men Annuals.  She’s not afraid to make tough decisions, especially when it comes to calling out Charles Xavier and Scott Summers on their hypocrisies.  And for whatever reason, it is she alone that retains her memories while everyone else is blissfully unaware of the billionth time-memory shift of the greater X-universe.  If this is the way things will be, I’m sure Eva Bell’s growth, as well as her suffering, has only begun. 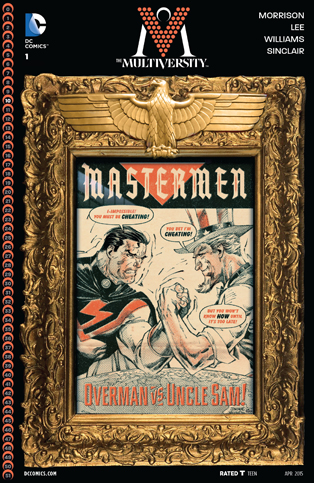 In a 2006 interview with German news magazine, Der Spiegel, Mel Brooks said, “by using the medium of comedy, we can try to rob Hitler of his posthumous power and myths.” It’s something Mr. Brooks has done throughout his career – from To Be Or Not To Be to The Producers to numerous jokes he’s made at dead dictator’s expense.

Multiversity: Mastermen begins with a full page splash of an angry and constipated Adolph Hitler. He’s straining on a toilet while reading a Superman comic. It’s a hysterical image that reduces one of the most evil men who ever walked the Earth into a crass poop joke.

Thus far, Grant Morrison and some of the best artists in comics have been exploring the morality of superhero comics – specifically in the battle of good versus evil and the effects the readership have on that morality. Multiversity, thus far, is a meditation on the nature of the DC Universe itself.

Morrison continues to explore the moral compass of the DC Multiverse in Multiversity: Mastermen. This time, Mr. Morrison is collaborating with superstar penciler and DC Entertainment Co-Publisher, Jim Lee. Morrison and Lee explore Earth 10 – a world where young Kal-El crash lands in the German occupied Sudetenland and winds up getting raised by Nazis. 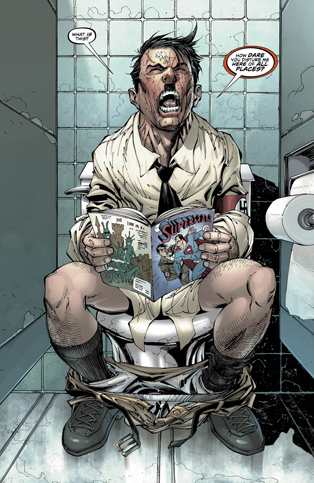 Given that the story takes place 60 years after World War II, the world of Earth 10 looks back on Hitler’s atrocities as something unfortunate from their past. Brunnhilde and Leatherwing think their utopia was worth the genocide committed 6 decades prior. Overman, on the other hand, isn’t so sure.

Uncle Sam finds a benefactor in this world’s Doctor Sivana (who has conspired with the League of Sivanas in both Thunderworld & the Multiversity Guidebook). Uncle Sam is able to raise a team of superheroes to combat Overman’s reign. The members of Uncle Sam’s Freedom Fighters are representative of groups targeted by Hitler. They include a Jewish Phantom Lady, a homosexual Ray, an African Black Condor and Doll Man and Doll Woman (both of whom are Jehovah’s Witnesses). I’m not sure which group Human Bomb comes from, but he has a mad-on for the New Reichsmen.

Multiversity: Mastermen gives us a morally conflicted Superman analog who is plagued by visions of Lord Broken and the Gentry. Overman stands on a mass grave of his allies as Lord Broken’s disembodied eyes laugh at him. Yes, this Kal-El was raised by pure evil, but there’s a part of him that yearns to make a better world. In a flashback, we see him repulsed by the Holocaust. He still carries on the Nazi ideals though. He’s not the hero we know as Superman.

Also, the heroes of this world act as terrorists. They’re not concerned with saving civilian lives so much as they are taking down symbolic targets with maximum casualties. Just like the worlds we saw in The Society of Super-Heroes: Conquerors from the Counter-World and The Just: #earthme, things don’t go so well for this world by issue’s end. All three worlds’ heroes and villains are colored in shades of gray. They’re complicated, compelling stories, but the Gentry seem to thrive on that moral ambiguity.

Multiversity: Mastermen starts with a darkly comic laugh and makes its readers pay for laugh in blood. Part of me dreads reading Ultra Comics and Multiversity # 2 while another part of me can’t wait to see where this is all heading. Still, Mastermen stands on its own as a comment on the applying real world morality to the fictional world of superheroes.