When first introduced in A New Hope, Darth Vader had such an aura of power and fear around him. His entrance on screen, accompanied by John Williams’ booming score, let readers know immediately that he was the villain to end all villains. Years later, we learned his true origins in another trilogy that reduced the mystique of the character to show that he was driven by a broken heart. 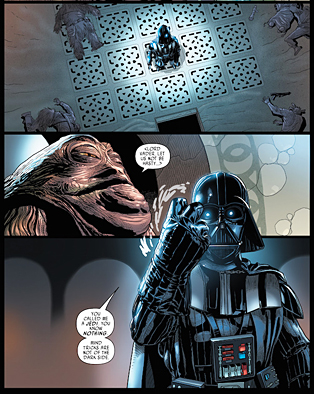 Darth Vader attempts to return to the villain we came to fear in the original trilogy. While the comic pulls at some of the plot threads we see in Empire Strikes Back, it presents Vader more as a lackey for the Emperor, running errands for him around the galaxy while attempting to learn more about the mysterious farm boy who destroyed the most powerful weapon in the universe with one shot.

The issue with this is that Kieron Gillen is trying to capture a lot about the character. His dialogue speaks of an attempt to recreate Vader’s biting inflection, but this is attempted more through catch phrases. We can hear Vader’s powerful metallic voice, but it doesn’t ring true. There’s something missing, and it could be the fact that we are suddenly introduced to a new set of character connections that once again remove the aura of the character. Before, Vader was a force of nature who only appeared to terrify everyone, stalking about in a fit of driven rage. Now, to see him out and about makes him more… human. And this version of Vader is one that is particularly difficult for me to get behind.

The real star of Darth Vader #1 is Salvador Larroca. His images are glossy and clean, and he captures the unique and original world of Star Wars with aplomb. The scenes of Vader in Jabba’s palace are phenomenal, both in the pacing and design. The imagery is reminiscent of Peter Suschitzky’s cinematography in The Empire Strikes Back. The set pieces, the costumes and the cold sightless eyes of Vader’s face all speak to a visual heavily influenced by what is arguably the best movie in the entire series. Some of the shots are clearly pulled from the movie, and who can blame Larroca for turning to the source material in order to color his own designs.

Not that the story doesn’t have its moments, either. For the first time, we see the Emperor’s reaction to Vader’s failure at the Death Star. We’re introduced to new characters and reintroduced to old ones. The plot is definitely intriguing, even if we’re already aware of a lot of it, and Vader has his own scheme going alongside the Emperor’s so it will be interesting to see how things play out, particularly if Vader has to suffer any further retribution.

My issues with Darth Vader #1 really stem from my own inability to see him outside of the established realm. Gillen is taking a chance with the character, and while he fumbles a bit to move beyond what we know of Vader, he definitely has a cool plan for the characters. Salvador Larroca provides one gorgeous illustration after another, so even while I may not have fully enjoyed reading the comic, I definitely enjoyed looking at it.

Darth Vader #1 is a starting point and one that maybe should be given a little bit of leeway as it attempts to establish its own identity. I’m still up for round two, so I’m not outright dismissing this comic. I’m just struggling to allow the same aura and mysticism to exist while still seeing the character in new ways. I just don’t want Vader to lose his allure for the sake of commerce. 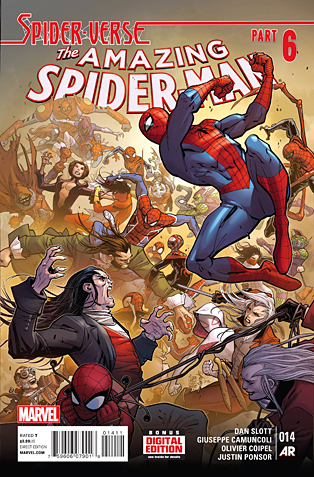 Morlun is meant to be Spider-Man’s greatest nemesis. Not his greatest foe – he’s got plenty of those – but someone who is physically stronger and driven by a fierce determination to see the end of Peter, not because he constantly ruins his schemes or stands in the way of monetary success, but because he’s got a deeper desire to suck the life force out of the Webslinger.

Pity to see him defeated so easily.

Amazing Spider-Man #14 takes the “wild card” motto to heart as a villain who returns suddenly offers some serious support to an otherwise dire situation. The point of “Spider-Verse,” at least in my mind, was to reinforce that Spider-Man, regardless of race or sex or creed, can defeat the most evil of evils. Here, though, he gets a little help from an unexpected ally who shows up conveniently to provide the last bit of mot juste to allow the heroes to save the day.

Additionally, one of the greatest aspects of Spider-Man is the fact that he doesn’t kill. This is so over-the-top in the finale that it’s saccharine. The amount of life sparing that occurs moves the story towards silliness rather than satisfying. Plus, Slott has to remind readers – from across the pantheon of Spider-Verse – just how good the good guys are, and this destroys a lot of their struggle. I get that Peter won’t kill, but maybe Slott could have found another way for them to disappear without beating the reader over the head regarding the “good” nature of Spider-Man.

The comic has a few good moments, though, as Slott clearly has fun with his characters. The myriad versions of Spider-Man provide levity amidst all the seriousness, particularly with Spider-Ham. Otto is still a dink, and he breaks a cardinal rule of being a Spider-Man, so we have yet to see his punishment, but the act definitely diminishes the final action sequence (which is grand and explosive). The epic scope of the story just feels lost under the need for a neat conclusion.

Throughout “Spider-Verse,” though, Olivier Coipel and Giuseppe Camuncoli have provided panel after panel of stunning, polished art. The beginning of the book is a bit cleaner than the end, though, and this shift in style is noticeable, but not in a negative way. They capture and translate Slott’s action sequences in a slick, fluid style, and Justin Ponsor’s colors bring the action sequences to life. Even where the story falls short, the art picks it up.

“Spider-Verse” started a lot stronger than it finished, but Dan Slott should still be praised for the scope of his story. He was able to successfully bring multiple versions of Spider-Man together for an exciting purpose. I loved the arc for a number of reasons, and Slott has cemented himself as one of Amazing Spider-Mam‘s greatest writers with another story that gets at the depth of the character, and what it means to be Spider-Man.

While it was a daring effort with a mixed finale, “Spider-Verse” was definitely worth the price of admission.