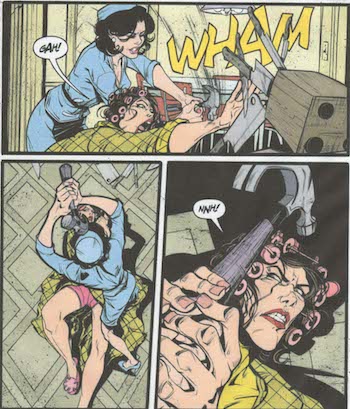 Man, I dropped the ball on this one, Dear Reader. Lady Killer #1 dropped two weeks ago and I just got to reading it last week.

Josie Schuller is a wife, mother, Avon saleswoman and an assassin. She spends her time doing most things society envisioned for women in the early 1960s – she dotes on her children, takes care of her live-in mother-in-law and makes dinner for her family every night. OK, so maybe she the Avon thing was just a temporary cover, but an Avon gig is the perfect cover for an assassin.

Joëlle Jones, Jamie S. Rich and Laura Allred deliver a first issue that takes full advantage of its environment – the colorful and repressive world of early 1960s America. Josie looks prim and proper as an Avon Lady on a house call. As she squirts and spurts her quarry with all manner of testers, she slowly reveals her true motive – murder. Joelle Jones’ storytelling and Laura Allred’s colors juxtapose the hysterical and the horrific in this sequence, setting a dark comic tone for the rest of the issue.

Building the world, introducing the characters and setting the series tone is the checklist for a successful first issue, Jones, Rich and Allred do just that. Josie’s home life looks like it may have just as much intrigue as her time as an assassin. Her German mother-in-law is suspicious of the time Josie spends away from the home. Her motives are ambiguous enough this issue. Is she just a concerned mother or are her suspicions more sinister?

Reading this first issue reminded me a bit of Marvel’s Agent Carter. Both star especially skilled, strong female leads hiding in plain sight in male dominated post-WWII America. The men in both worlds (save, apparently, for Josie’s handler) don’t see past either character’s Anglo-Saxon Male dictated gender roles while both Peggy Carter and Josie Schuller adeptly subvert what is socially expected of them. 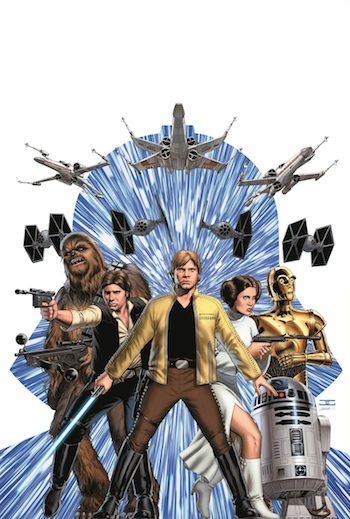 When Disney purchased Star Wars from George Lucas, comic fans knew it was only a matter of time before Marvel published its own comic. Luckily, and unlike The Dark Tower series by Stephen King, Marvel has written an entirely new story rather than rehashing the original trilogy in comic book form. With the fervent excitement centered around Episode VII (and the acidic ire raised by the prequel trilogy), now is the best time for Marvel to cash in on Star Wars fandom.

The result is a comic about which I have mixed feelings. On the one hand, it’s Star Wars and it looks, reads, smells and feels like it should. On the other hand, much like “Season 10” of The X-Files, the comic is a caricature of the series, and one that needs to do more than hit all the expected beats if it’s going to succeed.

First, the negative. The comic is a checklist of Star Wars dialogue, characters, and tropes. The story takes place between A New Hope and The Empire Strikes Back so Leia has gained a little bit of humility, Luke is experimenting with his Jedi abilities, and Han is, well Han – but the Han
Solo who is willing to work with others for a greater goal. The dialogue, not the characters, is what tripped me up the most. Han, for example, can’t finish a sentence without one of his trademark digs. There’s even a play on the most famous of Star Wars lines (“I got a bad feeling about this”).
Just think of something Star Wars related (old trilogy, of course) and it appears in Star Wars #1.

That being said, I still enjoyed the book. The story is very original, and takes place immediately after the events of the first movie. Several character arcs are occurring at once, but Aaron fits all the characters into the comic without having it feel forced. The pacing, too, is excellent, and Aaron has a knack for humorous beats. Where he occasionally relies on tried-and-true methods, he also gives the story a unique spin that definitely puts Star Wars #1 in line with its cinematic counterparts.

The finale of the book is its greatest success. Aaron creates palpable tension as he builds up to the climax, and the concurrent story lines create two pretty exciting conclusions that definitely leave me giddy to see where things are going. The big bad from A New Hope is back, but we see a more
terrifying Darth Vader. Here he’s the dark, violent character we know from The Empire Strikes Back, most notably in how he uses Stormtroopers as dispensable shields. I hope Aaron is going to explore Vader’s growing obsession with Luke while building the camaraderie between the characters and addressing Han’s run in with a bounty hunter on Ord Mantell (as referenced in Empire).

Plus, John Cassady is a fantastic choice for the art. He obviously has a lot of material to work with, but the photorealism helps seep the readers in the story. The composition of the shots is cinematic, and you can hear John Williams’ score blaring in the background of certain scenes. Props to Laura Martin for her shimmering colors, especially in conjunction with Cassady’s polished designs and tonally perfect shading.

Fans of George Lucas’ Star Wars will love Marvel’s. Like I said, the book is trying to find its footing but it needs to get readers into the right mode. This comes at a price as the comic sometimes strays too heavily into repeating what we’ve already seen without being more
original. But, again, that’s really in the dialogue. The rest of the comic is a step back into the theater with the familiar title scroll on the screen. While the prequels may have taken away some of the original magic, Star Wars #1 brings it right back and the nostalgia is a bit overwhelming.

This book is a trip back to childhood, and one that I’m honored to take again, especially with Jason Aaron and John Cassaday at the helm. 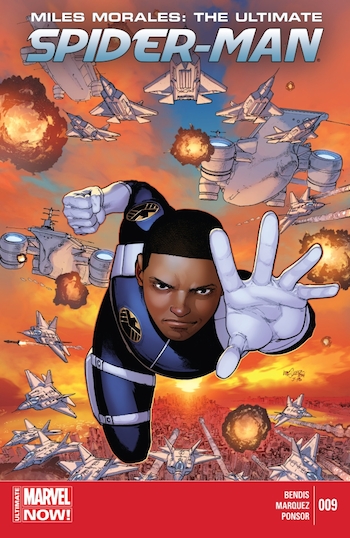 One of Bendis’ greatest gut-wrenching moments of The Ultimate Spider-Man was when Miles Morales revealed himself to his father only to have his father renounce him, blaming Miles for the death of his mother. Now, BMB is setting things right between Miles and his father, and revealing some interesting interconnectivity between Jefferson Davis, S.H.I.E.L.D., and the Kingpin.

The comic is told mostly through flashback as we learn that Jefferson took a job following the Kingpin in order to aid Nick Fury. The reason for this becomes clear in this issue as Fury was hoping that Kingpin would lead them to a big score, which he does, and that they could use the moment to lock Wilson Fisk away for a very long time.

Even though the comic is past tense, BMB has excellent pacing to make the events current. With the help of David Marquez — who does a great job of altering his clean, smooth styling — we slip into the past seamlessly. Bendis gets creative with his panel designs which is especially important
in this issue, given the amount of narration that occurs. Bendis has a weakness for writing too much dialogue, and having Jefferson tell the story does hinder the pacing, but Marquez’s poster-like splash pages make reading the comic fun and not a chore.

And the comic really succeeds because of Marquez. He bookends the comic with the style we’ve come to know from Ultimate Spider-Man, but the middle – the flashback sequence – is more akin to Rafael Albuquerque: rough hewn, edgy shading, thick, blocky inks. Justin Ponsor provides the colors and he too uses a dimmer palette to display the past so that when Bendis returns to the present, the story becomes vibrant and alive.

The comic is a pretty straight forward tale of redemption and forgiveness, but that doesn’t make it any less engaging. Jefferson Davis’ past lends some deep mythos to the character, and his involvement with S.H.I.E.L.D., Nick Fury, and Kinpin makes for a more deadly history, and one that could have serious repercussions in the future (as short-lived as that may be given Marvel’s mysterious solicitations for issue #12).

Miles Morales: The Ultimate Spider-Man has found ways to consistently keep itself fresh while not doing anything too unique. Bendis is just that good at writing an emotional story that connects with readers’ cores. Plus, having David Marquez and Justin Ponsor on your team means that the book will be as visually engaging as it is in story. So while Miles’ future may be limited, I’ll take what I can get, particularly with issues like this one. 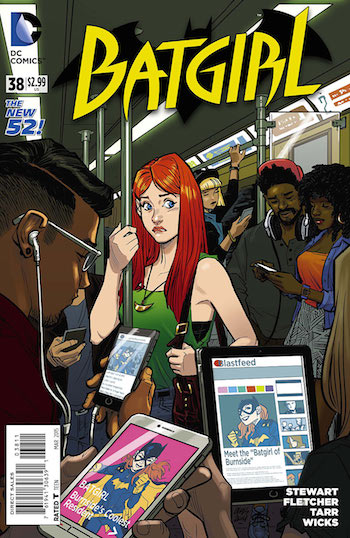 Just last week in my Unbeatable Squirrel Girl review I talked about a small but growing trend among superhero comics that puts forth funny, upbeat, well-adjusted superheroes as a departure from the grim, brooding, often violence-saturated heroes that have become mainstream. Ms. Marvel is probably the most successful and well-known of this new trend, but I also included Batgirl, as portrayed by new creative team Cameron Stewart, Brenden Fletcher and Babs Tarr.

And now the very next week, with Batgirl #38 (the fourth by this new creative team, who took over from Gail Simone), we see Barbara feeling guilty about her own happiness. It’s not that Barbara was miserable before the new creative team took over and moved her to Gotham’s Burnside district (the loose equivalent of New York City’s Brooklyn). Gail Simone’s Barbara certainly had burdens, such as her PTSD, but she also had positive coping mechanisms and strong relationships to help her through her challenges (Gail Simone’s Batgirl: Future’s End tie-in was a beacon of hope amidst the self-indulgent violence most of the other Future’s End tie-ins delivered).

But Stewart, Fletcher and Tarr’s Batgirl is different. She has a new group of non-superpowerd friends, and no anxiety about hiding her Batgirl life from them. She’s never seen interacting with other superheroes, except for Black Canary. She goes on dates, she works on her thesis, she buys coffee and dresses like a hipster. She has a life outside of Batgirl, and furthermore she seems to have integrated her Batgirl and Barbara personas more than she previously was able to or felt comfortable doing.

And that’s where the guilt comes in. Barbara has been fighting with Dinah Lance, a.k.a. Black Canary, for several issues now, and it’s gotten tiresome since the disagreement began in Birds of Prey, which most people probably didn’t read, since the book was cancelled for low readership. Without a basis for the argument, it’s seemed artificial and petty, but in this issue Dinah introduces a new element: she accuses Barbara of not taking crime-fighting seriously enough.

“I want to have some fun,” Barbara retorts. “You think I don’t deserve that? After everything I’ve been through?”

The art in this scene is a departure from what we’ve usually seen in the new Batgirl: it’s shadowy and chiarascuro, with high contrast between the yellow alleyway lights and the darkness. The argument itself is interesting. On one hand, even before the issue’s end readers can easily see how Barbara’s need to be liked as Batgirl, even going so far as to pose for pictures in costume and check her Twitter mentions, is going to come back to bite her. On the other, doesn’t she deserve to be happy?

In a way, Dinah can be read as as stand-in for current comics, particularly DC Comics co-pilot her Dan Didio, who famously expressed his belief that superheroes shouldn’t have happy personal lives. It’s too early to tell if the argument with Black Canary is intended to bring Batgirl’s tone back
into alignment with the rest of the Bat family, or if it’s the writer’s way of addressing the current comics climate and delivering a defense of their Babara Gordon. I obviously have a preference, but I can’t wait to see where the creators go with it.