I have a confession – I am 35 years old and I only started watching Buffy the Vampire Slayer two years ago. I completely missed out on it, winning the ire and ridicule of several friends over the years. I was “that guy.” So when I noticed the entire series was on Netflix, I plowed through the first three seasons. I loved it! Now I am in Season 4. The silent episode was great, but the series is clearly trying to find its feet now that Cordelia and Angel have moved to LA. But enough about that – let’s get on to Buffy the Vampire Slayer Season 10 #8. 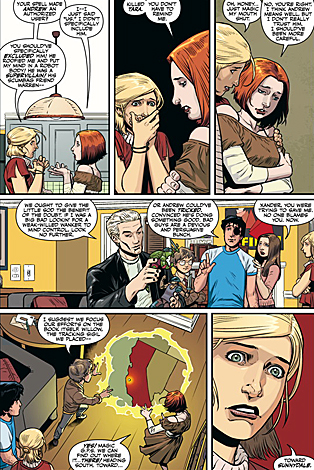 This issue is touted as a starting point for new readers – and it works! Granted, having some knowledge of the Buffy-verse helps, but the exposition in the beginning does a great job of catching readers up to speed while simultaneously showing us how these characters interact. Gage’s script and Isaacs’ art capture what I love about the show. The banter and acting between Buffy and the Scoobies feels perfect.

The issue begins with Buffy’s Vampyr book (a gift from Giles) from the series premiere going missing. So Buffy, Spike and Willow take a road trip to their old digs. “Return to Sunnydale Part 1” is a starting point for lapsed Buffy fans and new readers alike. It picks up on a lot of threads from the series, as well as adding something new, like a Cthulhu monster!

This is an unusual issue for Buffy comics since it has two artists. The series regular artist, Rebekah Isaacs, draws all the scenes that take place in the here and now. She has these characters and their world down. Looking at her work is always a treat. However, this issue has something extra special: a sequence drawn by horror comics legend Richard Corben! I don’t want to spoil it, so all I’ll say is that it’s a flashback in Hell involving the Cthulhu monster and his ilk. It’s devilishly delightful (sorry, I couldn’t avoid the alliterative pun).

Since I have so many friends who adore the series, I’ve known the big story points for some time. I knew Angel would go bad in Season 2. I know Tara died. I know Giles died and was reborn as a kid. It’s kinda like never seeing Star Wars but knowing Darth Vader is Luke’s father. Gage and Isaacs deliver a comic worthy of its parent series. It continues the thread about the rebirth of magic in the Buffy-verse and I am (finally) along for the ride. 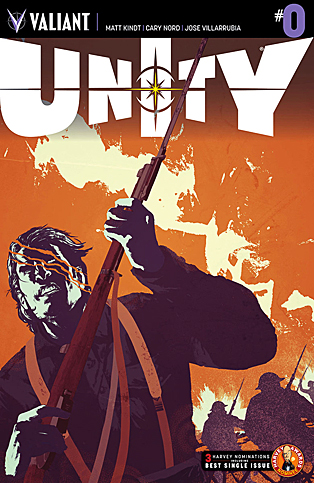 When last we left the Unity team, their future was uncertain. They took the fight to the Armor Hunters, lost one of their own and now the public knows they exist. The status quo is shaken up a bit, and now it’s time for a dramatic breather – a coda of sorts. So Matt Kindt and Cary Nord take the opportunity to flesh out some of the Valiant Universe’s past with Unity #0.

World War I begins to wane as Gilad Anni-Padda, the Eternal Warrior, and his clandestine team of British and American superheroes battle the Germans. Gilad’s squad, Unit Y, includes the following: Dell is a female soldier in a period-appropriate diving suit that has wrist-mounted flamethrowers and a mini zeppelin. Breaker is a pacifist tinkerer who winds up inventing autopilot on the team’s last mission. Alpha rounds out the squad and he’s a bit problematic. He’s the only African on the team. He runs around half bare chested and he claims to have gained his powers from tasting “the blood of the ancient lion.” He sports a red British army coat and brandishes a saber (which, in fairness, reminds me of Iron Maiden’s mascot, Eddie, as the Trooper).

Kindt’s script places a pretty large foundation in Valiant’s continuity by establishing that superheroes go back as far as World War I. Granted, this is Unit Y’s final tale, but it’s a wellspring of ideas. Heck, I’d love to see Dell in action again or get a glimpse into Breaker’s workshop! The issue left me wanting to learn more about these characters and this point in the Valiant Universe. And aside from Baltimore, who else in comics is playing with the Great War?

Artist Cary Nord and colorist Jose Villarrubia give the book a pulpy feel. The comic feels as grimy and gray as the War to End All Wars, but still has some bombastic action. Nord does a lot with body language and facial expressions, showing readers how close Gilad and Breaker are as they chat and how different Alpha (the noble savage) and Dell (the science hero) are as Dell saves Alpha from mustard gas.

This issue, while it looks like a one-off, feels like it’s going to have some significance down the line. Valiant was promoting December’s The Valiant at New York Comic Con. Kindt is co-writing that book and it looks like it’s going to feature the Eternal Warrior pretty prominently. I wouldn’t be surprised if the events and characters in Unity #0 pop up again. I would be more than happy to see them.