A year ago, I lived in the parent-funded squalor, disarray and general life anxiety that goes hand-in-hand with being a senior in college. My friends and I shared a side of a duplex that we lovingly dubbed the Trash House. It was kind of like a frat house, but smaller, nerdier, and it was so messy that you could have hidden a body in it. We had a pair of armchairs out front that we would sleep on whenever it was nice out. Our neighbors (one of whom also ended up committing a hit-and-run against my Volvo) periodically threw them into the woods. We would go get the chairs and put them back. One time we drew on them with Sharpie, because somehow this would deter them. It didn’t. Our other neighbor was a crack dealer. We never watched RoboCop.

Scrolling through my iPod, I recoiled in horror

Our living room exhibited those same qualities that seem awesomely bootleg at 21, but totally depressing and alarming to your parents. The walls were adorned with the sort of decorative towels you’d buy in a store at the beach that also sold beer bongs and dead sharks in glass jars. There was a beer fridge in the corner that would of its own volition get so cold that it would explode our beers. Other times, it would just shut off and skunk all of the beer and then make our living room smell sour for days. We also had a sword with the Star of David on the hilt that my roommate’s brother had bought at a renaissance fair. (When we were bored, we would go in the driveway and take turns throwing non-exploded beers at each other and chopping them in half with the sword.) Basically, our living room was the Sarlacc: once something went in, it wasn’t coming out.

When one afternoon I took a nap on my couch with my iPod nano sitting next to me, only to wake up and find that it had disappeared, I understood; heavy is the head that lives in the Trash House. But still. For a music obsessive, the loss of an iPod can hurt more than the loss of a lover – while one pissed-off ex can steal your stuff, make you regret stuff you said and did and generally make your life unnecessarily difficult, a missing/broken iPod represents a fairly explicit, quantifiable sunk cost (I would get my economist friend to explain why my argument makes sense, but he’s 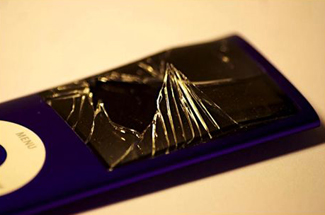 sleeping, so you’re just going to have to trust me on this one). So, like a hungry chimpanzee looking at an anthill and deciding that sticking a twig down there will help him eat the peanut butter and ant sandwich that’s better than nothing, I adapted. I loaded 40 or so songs onto my cellphone, changed them out constantly and kept it movin’.

In the eight or so months of my iPodlessness, a lot of stuff happened. I won’t bore you with the details, but I’ll say that I mainly spent my time DJ’ing radio shows and going to shows, and if you’ve ever considered buying or selling alcohol on Craigslist – don’t. Maybe because it was all happening to me in the drudge of real-time, I figured whatever I was doing on a day-to-day basis was pretty much the same. And then, on the day it came for me to move out of my house (and move to New York City, like, a week later), I found my iPod. My roommate Nolan and I decided to cut the bottom of our coach open with a knife, because it kept rattling whenever we moved it. (Was there change in there? We hoped so.) And there it was, full battery, paused on Best Coast’s “Happy.” Um, what? Best Coast sucked. Why would I have been listening to Best Coast?

Scrolling through my iPod, I recoiled in horror. The Hold Steady? Ween? Freddie Gibbs? Steely Dan? I mean, they were all fine in their own ways, but this was entry-level alt stuff, music that was all too self-serious, so obsessed with proving its own intelligence to the listener that sometimes the music suffered. And then there was the world-psych. Oh God, the world-psych. Call it a side effect of working at perhaps the nation’s weirdest college radio station, but I listened to way too much of that stuff back in the day. Also tucked in that little iPod was Guns N’ Roses’ Chinese Democracy. I don’t even know where to begin on that one. If I could have jumped back eight months in time, would I necessarily like the person I had been? I honestly don’t know.

I’ve been thinking something of the same thing about Earl Sweatshirt of Odd Future lately. The 17-year-old rapper – hailed by many as the best teen rapper since Nas – has recently returned from military school in Samoa. In his absence, his friends have gotten famous and probably changed in the ways that fame tends to change people, while Earl has mostly kept up via the Internet and changed in the ways that going to military school changes you. After the shock of being reunited wears off, will they still be the friends they were before they were famous?

Only – and I am sincerely sorry for dipping into this cliché after already have written about the passage of it – time will tell.