In 1932, actor Peg Entwistle jumped to her death from the “H” of the Hollywoodland sign. Her suicide note read, “I am afraid, I am a coward. I am sorry for everything. If I had done this a long time ago, it would have saved a lot of pain. P.E.” It wouldn’t be the last time a superficial city took someone’s life.

There I was, on a harshly lit Los Santos rooftop, stalking a celebrity pot princess. I should’ve been boosting cars. After all, this was Grand Theft Auto, not Misdemeanor Following. A victimless crime, I rationalized, as I snapped a photo of the starlet scoring ominously named weed.

The shadowing began harmlessly: to increase a stat or fulfill a mission. And later, to assuage my curiosity. Some of my targets were interesting. Lifelike. I wanted to know who they were, what they did. I listened to cell phone conversations at a safe distance – “You seriously don’t remember me?” said one woman, “We just had sex yesterday!” 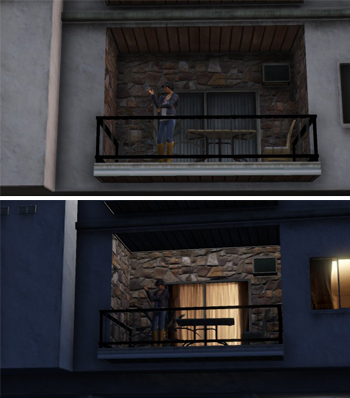 I gave myself rules: I would follow a target for a short period, but I wouldn’t go any further than that. After all, I had a much more important narrative to see through, more important than my inconsequential, non-diegetic impulses. Or so I thought. As rules are meant to be broken, and if anywhere, Los Santos would be the place to do it. That’s when I decided I’d follow someone home. I didn’t count on how weird it would get.

My first target caught on to me. I must’ve gotten too close. He ran and I gave chase. A few miles later, it dawned on me that this guy wouldn’t stop, but neither would I. My will was strong, but my body gave out and collided with pavement.

My next target walked toward the intersection, waited for the light, walked across the street to the adjacent corner, waited some more, and repeated this until we were back where we started. Not exactly my idea of a neighborhood stroll. He left the intersection toward the direction I began following him, and I thought, good, he’s going home. But he didn’t. I mean, none of them did. They never went home. Los Santos was one peculiar phenomenon after another, people standing on stoops and smoking in endless loops.

What was happening in this strange town?

I had had enough. I cut across the nearest lawn, ran up the driveway, reached the door, smashed into it, and proceeded to crumble in an animation that would make QWOP eat its heart out. This was no ordinary door. In fact, it wasn’t a door at all. Couldn’t be. I dashed to the house across from it, and then to the one next to that. Perhaps I had a concussion. I decided to take this downtown, because if anywhere in this damned city would welcome me inside its polygonal architecture, it’s one of the buildings of its skyline. Stranger yet, these monolithic constructions, looming over the city like deities, offered me no sanctuary. It was a town made of cardboard, and every passing moment yields an irreparable tear.

The real Los Angeles is plagued by homelessness. People stand on busy intersections holding crudely made signs. Out-of-towners are made anxious by this – they look away, or fiddle with their phones and pretend not to see what society wrought. Those who live there, however, see the homeless as just another fixture – a staple of capitalism gone right. It’s not that they’ve grown heartless; they’re just accustomed to seeing them there. They’re as much a part of the city as the buildings. Los Santos doesn’t have such an issue with its homeless, who fit neatly under a rug composed of overpasses and abandoned parking lots. Not until around 30 hours in the world of Los Santos did I finally see a homeless man holding a sign. 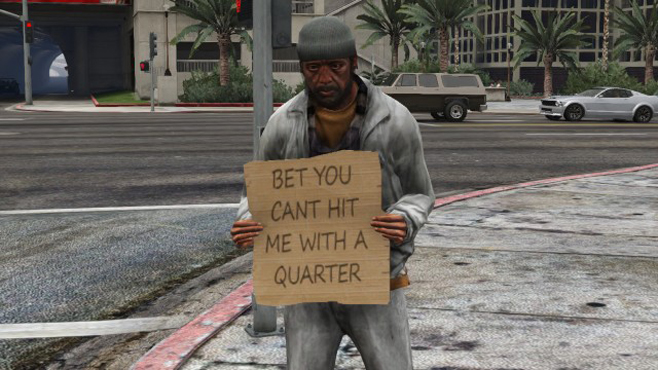 My conclusion: The cardboard city of Los Santos and its unfortunate residents are victims of technology.

Videogames have a lot in common with automobiles. Both deal with complexity made simple for user interaction. Both put the user in control of the system, and both allow modifications to the system at the user’s discretion. One takes people from one place to another. The second is a car. It’s a car because it does what it’s supposed to do within the limits of its own technology. While all automobile makers use the experience of driving to inform the technology under the hood, the designers of Los Santos use the technology to inform the experience. Videogames don’t know what they are yet and Grand Theft Auto V is the poster child.

This became clear while, in Rockford Hills, just as I was growing weary of stalking, my phone rang. A random call from Tracey, my daughter. I was shocked. My wife took off with the kids after my sudden descent into madness. No fault of my own, my body seemed to succumb to a force beyond my control. I blamed this on the city. Tracey must be equally mad to call me. So far, I put her in harm’s way when I murdered a bunch of people at a yacht party and alienated her further when I assaulted a scummy TV personality taking advantage of her, so this latest endeavor should be quite colorful. She described the situation: intimidate the Purple Car Stalker. Surely, she knows what’s going to happen.

She facilitates my madness by literally putting me in the driver’s seat. It’s her car, she should drive. After all, my crowning achievement as a parent came when I tried to connect with my son by drinking and driving, and I damn near totaled the car. I woke up naked several hours later in a nearby field. My family promptly left me. All I have to remind me of them are the occasional call or email and the wedding photos strewn across my bedroom floor. 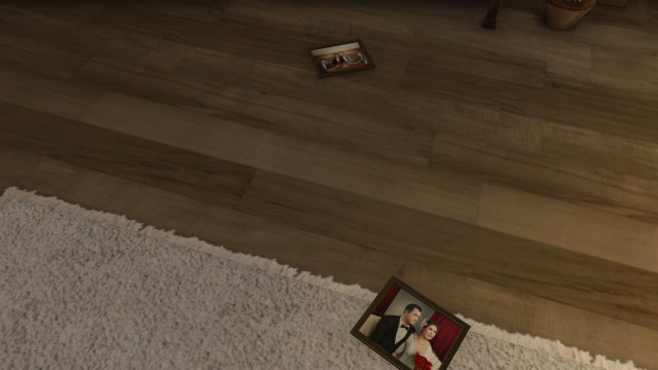 Everything about this “quality time” with my daughter felt like a farce. She talked to me robotically, sporadically. The guy wasn’t even actively stalking her, she just decided now was the right time for us to go looking for him in this huge city. This gigantic city, within which Tracey managed to condense her would-be stalker’s whereabouts into three conveniently close locations. Two U-turns and several lines of nonessential dialogue later, the Purple Car Stalker appeared. Tracey continued her robotic jabbering as I sideswiped oncoming traffic, discharged my semi-automatic, and pit-maneuvered the stalker’s car to a halt.

As I pulled out my sniper rifle and looked through its scope, I had the feeling none of it was real. It was as if Tracey engineered the entire situation as an excuse for me to commit these atrocities. We drove past his lifeless body and routinely avoided the cops. It wasn’t an experience, but a thinly veiled system designed to give the city credence. Perhaps I was paranoid, but my paranoia was justified by a situation a little ways down the road.

Martin Madrazo, the Mexican mob boss, was the catalyst for my downward spiral. At least that’s what I thought anyway. For reasons beyond my control, I deemed it a good idea to pull a job for Madrazo, a job that didn’t pay. I’m all for doing favors, but this job wasn’t your typical snatch and grab: I had to bring down an airplane with a fucking rifle. Vital as it was to his entire enterprise as a crime lord, Madrazo didn’t think twice about handing this job over to me, the guy who brought his house down. Did I mention no pay? The real payoff here was kidnapping Madrazo’s wife, a pointless endeavor which forced me out of Los Santos and into the desert. The city wanted me out. This Madrazo business was just an excuse to justify a massive world outside of Los Santos.

I have to wonder, will anyone even remember my insane exploits? By next year – never mind five, or 10 or 20 years – a bigger and more splendiferous city will arrive. A new Los Santos, perhaps, with fully designed building interiors, or a San Andreas with statewide drives that actually take hours. Virtually nobody cares about this city, or the events that happen within it. It’s built for show, “because we can.” Everything that happens here is meaningless, a mere showing of technology until the next “because we can” city is designed. Los Santos is not the place we think it is. It’s now. It’s only a matter of time before I start running over innocent pedestrians to the soundtrack of Toro y Moi.

At sunset, I’ll walk the winding paths leading to the “Vinewood” sign, notice the graffiti marring its pristine white letters, climb the workman’s ladder to the top of the “V” and stare at the promising Los Santos skyline for what will be my final time. 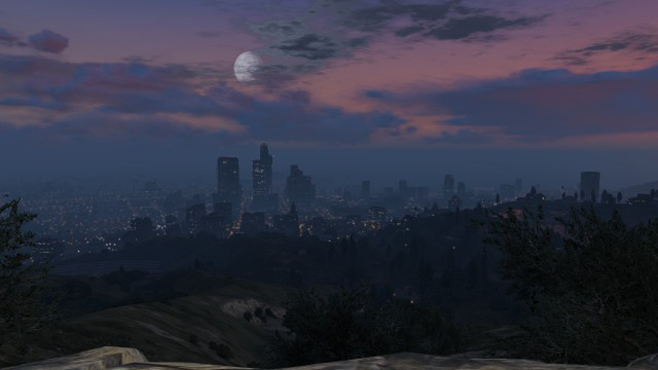