I’m a sucker for writing craft – the stuff that makes a good plot into something you can truly care about. I don’t simply mean, “I like it. It’s got a nice plot.” I mean I truly care about skillful writing. 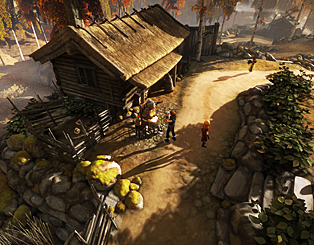 That may be why I like Brothers: A Tale of Two Sons so much. The game focuses on two brothers. Before we meet them they have already lost their mother, drowned despite the younger brother’s best efforts. Now their father, too, is ill. The doctor points them in a direction for a cure, and we follow them on their quest. From here on we’re stuck with these guys, so we’d better like them.

In movie scripts – the good movie scripts – there’s usually a particular moment written early in the running time. Blake Snyder calls it the “save the cat” moment, but the idea is the same regardless of whether or not a cat is stuck up a tree.

“It’s the scene where we meet the hero and the hero does something – like saving a cat – that defines who he is, and makes us, the audience, like him,” writes Snyder.

With the condensed running time and lack of player control in film, you only need one of these scenes. An actor can constantly act in a way that tells us about his character – the way he walks, the way he talks, the way he does things – but a videogame character can’t. Aside from cutscenes, the character is forced to act according to the player’s whim. And it’s hard to characterize someone who’s being played by someone else.

Brothers knows how to save cats, though. This is unsurprising when you find that it was directed by a film director. Game designers have cribbed off movies since their inception, but they rarely do it when building their characters. 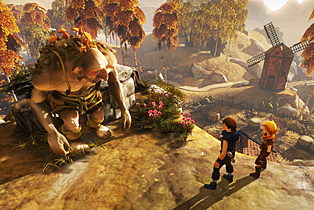 In Snyder’s books he gives numerous examples of “save the cat” moments, one being from Aladdin. How do you write a film where you’re supposed to root for a thief? He is a thief, no matter how charming his smile is. I don’t want to be friends with a thief, but I could think about hanging out with a guy who steals bread and gives it to starving children instead of eating it himself – especially if he then saves the kids from getting whipped by a bad guy. Now he’s more than a thief; now we can hope good things happen to him and that he gets what he desires.

Instead of one moment like this, in a sea of exposition, action scenes and careful explanations of motivations, Brothers gives us many.

You control the brothers independently – one analogue stick and one button for each. Maneuvering them next to something and then pressing the button has them interact with it. Instead of one short scene in the film, there’s a short vignette for each thing you discover. 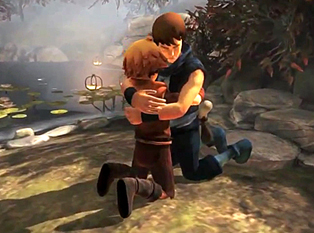 It’s impossible not to like the two brothers. And while the game crams their personalities down your throat, it never becomes boring or invasive – you’re only reminded by how much you like these guys and how much you care for them.

There’s a reason why I like Two Brothers so much and why there’s a buzz around the game. Blake Snyder has that covered, too: “Liking the person we go on a journey with is the single most important element in drawing us into the story.”

In this case, it’s two people. And they’re damn good at saving cats.

Blake Snyder, Brothers: A Tale of Two Sons, Save the Cat