As a queer preteen, I watched “The Host,” Star Trek: The Next Generation’s initial look at the Trill. This alien race was the first time I saw my queerness, more complicated than bisexuality, expressed on television.

Perhaps someday our ability to love won’t be so limited.

The Trill can be both female and male, depending on the gender of its host. I view the body-switching parasite as a metaphor for the soul, essence or character that is found in humans. While disembodied, the Trill Odan looks somewhat like an organ. However, I interpret it as the will or consciousness that directs organs. I define my queerness as loving this essence of a person.

Yet, my love of the soul—like Beverly Crusher’s attraction to Odan—is also embodied. Odan’s signature gesture, kissing wrists, is a physical action that easily belongs to either gender. The insides of wrists have long been an obsession of mine. I have dated boys with slender, delicate wrists; some women I’ve loved have had strong, broad wrists. I even got my own wrists tattooed, hoping to attract Odan-like kisses. 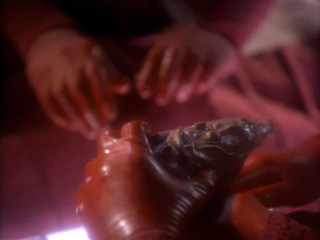 In addition to feeling like I love the “Trill” inside humans, I sometimes feel my queerness is a parasite. I have been condemned by gay and straight communities for being a “fence-sitter,” guided by an unfamiliar symbiont rather than the politics of love. However, I have met other “Trills” who understood sexuality in the way that I did.

I have also met several Beverlys — straight women and gay men who could not love my host body. Encased in less elegant words, I heard the subtext of her rejection of Odan; female organs were the problem.

Yet, Beverly expressed hope that sexuality could evolve: “Perhaps, someday, our ability to love won’t be so limited.” Not only would I like to see more human “Trills” and more acceptance of “Trills,” but I also hope that our modern media will show more of my kind of queerness.

Marjorie Jensen holds an MFA from Mills College and currently works at U.C. Berkeley. She occasionally tweets @metaphorjunkie. This piece was reprinted with permission from the author.