If you want me to get on board with any media – be it a movie, a book or a comic – give it a noir feel, 1930s clothing and weapons and a whole bunch of gangsters. Chin Music has all of that. Except, well, the comic doesn’t really tell us what it’s about, lacks basic transitioning between scenes and relies heavily on its opacity. 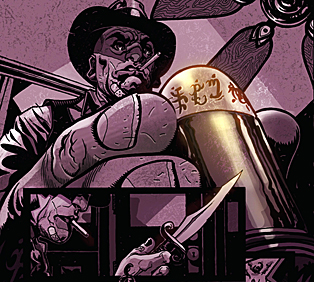 And therefore, Chin Music is a disappointing read.

Granted, the comic has potential. I was immediately hooked by Tony Harris’ gritty designs, rough-hewn inking and simple palette. The shadow-heavy visuals do more for the comic than any of the words or actions. Much like Ben Templesmith’s work in Ten Grand, Harris’ art lays the foundation for the tone of every scene. Sometimes it’s a bit too chaotic, and these panels suffer from the same lack of connectivity that the comic suffers from. But the final pages – with their sharp colors and smooth finishes – make up for any visual mistakes.

The story, however, needs work. I gather that Chin Music involves spirits, seers, mysticism and Eliot Ness, but I really have no idea how these ideas intertwine. Steve Niles gives the readers less than bare bones, so that a magic bullet fired five pages in kills a character on the last page.

I really have no way of making any connections here because Niles fails to lay the bread crumbs for us to follow. Instead, the comic is a hazy mashup of some interesting art while a story sort of exists, in some ethereal plane, without presenting itself clearly.

Yet even with all of this, I’m still very intrigued by Chin Music. It’s loaded with cool elements that many comic fans would find worthy of their money, including a skeleton crawling through a desert!

I just hope that Steve Niles puts up a better show in the next issue, because if he wants readers engaged in his story, he has to give them something to go on. 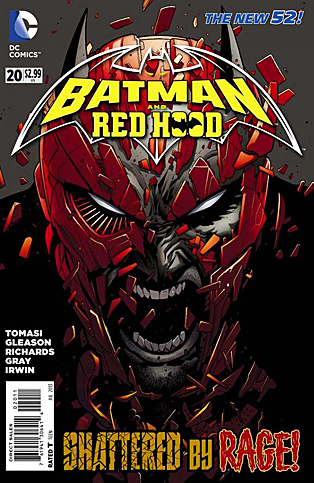 In the wake of Damian’s death, Bruce is reeling between supporting characters, and this month’s issue features Bruce’s former Robin, the Red Hood. Unlike the previous issue, however, this issue is caught between two worlds, and its odd, mid-issue shift ruins an otherwise interesting and exciting story.

Peter Tomasi separates the issue into two parts: the first deals with Carrie Kelley, and the second deals with Jason Todd. Carrie’s moments are great, and we see her confidence and intelligence when she shows up to return money Bruce gave her as payment for working with Damian on acting lessons. We also see how easily she could slip into Bruce’s life. Tomasi plants a few seeds with this notion, giving Carrie a reason to keep showing up, but when he veers away from this, the comic becomes much darker and, really, much more strange.

The second half of the issue deals with Bruce and Jason hunting down a group of assassins who tried to kill Damian a while back. Bruce’s reasons are pretty straightforward: he’s angry about his son’s death and wants to take it out on someone. But when Tomasi reveals Bruce’s true reasons for asking Jason to tag along, the issue becomes more like a rehash of Batman’s encounter with Frankenstein. Basically, Bruce needs Jason to help him resurrect Damian.

The brutality of their fight with the mercenaries is pretty awesome, and Bruce shows a much darker side than we’ve seen before, even allowing Jason to use guns during their attack. And while I appreciate Bruce’s fight with Jason, his demented reasoning is becoming the overall driving force for the story. I would hope that after what we’ve seen from this series, Tomasi has more planned than just having Bruce bring in random associates to help him bring Damian back to life.

The artistic team, as well, takes on two different roles. Pat Gleason gets the first half of the comic, and then Cliff Richards takes over when Batman and the Red Hood attack the assassins in Ethiopia. Richards’ artistic styling is a bit too clean for Batman and Robin, and his characters come off looking a little stiff. Gleason, however, has a much more organic styling to his art, so the images are unique and powerful.

Batman and Robin is still a worthy buy. While I found the premise a bit of a rehash of last issue, I still appreciated the originality of Tomasi’s story. Bringing Jason back to the site of his death is a bold move but also very off-putting. I just don’t think it’s something Bruce would do, even in his grief-stricken state.

The final page offers promise for Tomasi to switch gears completely, even if it comes out of nowhere, but I like seeing that he has plans beyond showing Bruce being devoured by his sadness. Hopefully, we’ll see Carrie Kelley take a bigger role in the story to fill Bruce’s void. While he won’t be healed, he’ll at least have something towards which he can put his attention and effort. 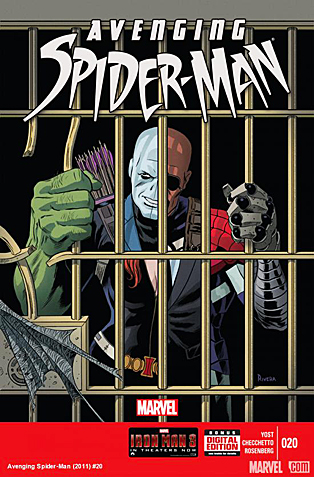 Bannen’s Book of the Week: Avenging Spider-Man #20 has a simple enough premise: Otto is going to break into a S.H.I.E.L.D. Helicarrier and free Dmitri Smerdyakov – a villain better known as the Chameleon. Otto doesn’t make his reasons clear just yet, but what Chris Yost shows is that even the best laid plans of the master planner aren’t always successful.

In fact, sometimes other villains are up to no good as well.

Yost places Otto front and center, hitting the comedic beats with impeccable timing and crafting a slick tale of sabotage. Otto is at his arrogant best, but now we see him starting to understand how people around him perceive Peter’s persona. Much like the Chameleon, we see Otto playing Peter’s part well, even getting his trademark humor down pat.

Because Spider-Man narrates the entire issue, the story never loses its flow or thread. The transition between scenes is handled so well and so cleverly (through the use of Otto’s all-seeing Spider-Bots) that only the introductory pages feel out of place. In fact, the story is so strong that the prologue could have easily been removed. Yost does well enough with the main story that he really doesn’t need any setup at all.

Additionally, Marco Checchetto is superb. He uses a lot of moment-by-moment panels, giving the issue a movielike tone; the comic is also heavy on tight sequential shots. Plus, Checchetto’s fine pencils are supplemented nicely with some impressive inking. Chameleon, in particular, looks maniacal and terrifying because of the inks. A lot of Spider-Man’s villains lack a true sense of danger – they’re a lot of brute force rather than psychotic emotions – but Chameleon really takes on a darker and more threatening tone.

The final page of the comic is a brilliant segue into the next issue, and I can’t wait to see how Yost plans to wrap up this story. Avenging Spider-Man is a consistently good book, but this week’s issue is fantastic and easily my pick of the week due to its solid story and strong art. Peter may be gone, but Otto definitely knows how to handle the spotlight.