Console generations have historically been about moving the visual performance of the hardware forward. The gap between the current and previous generation was also about evolving connectivity. These are the two metrics I consider when I assess the need for another generation of console hardware, and then whether I need to get on board or not.

John Teti wrote a brilliant analysis of the PlayStation 4 preview event (I refuse to call it a reveal) on The Gameological Society and one of his arguments is that pushing hardware power does not equal innovation in videogames. David Cage took the stage during the preview to argue videogame creators have been hamstrung in their ability to create emotion owing to the technical limitations of previous hardware, equating polygon counts with the ability to depict human expression.

I don’t understand anyone who is already getting excited about the PlayStation 4. We know better than to do so this early.

I have four words to say to that. The Walking Dead. Journey. Games which do not require powerful hardware to run and are counted among the best games of 2012. Hell, Journey swept up at the DICE awards earlier this month and is likely to follow suit at the GCDAs in March.

As Teti witnesses, Killzone Shadow Fall is just more Killzone. The idea of “next generation gameplay” sprinkled here and there throughout the PS4 preview eludes me. I hope to hear game developers getting very specific in the near future about what they want to do on the PlayStation 4 which they simply could not do on the PlayStation 3 outside the realm of graphics.

PlayStation Home was a failure so now Sony is ostensibly going to look towards an Xbox Live-type community. The ability to quickly share content and upload videos could be interesting. The ability to observe other players’ sessions and to jump in and take control over their games to help is also interesting. We have no idea whether any of this will actually work, however, and from last week’s preview, these are the bulk of the new connectivity features the PS4 is going to offer.

They are also just promises, like the idea of cross-platform play with the PS Vita, and we ought to remain skeptical of all these announced features in light of Sony’s track record on console reveals as excellently outlined by Andrew Groen on Wired. I don’t understand anyone who is already getting excited about the PlayStation 4. We know better than to do so this early.

You have to buy next generation hardware because otherwise the videogame industry won’t know what to do with itself. And maybe God will kill a puppy. I don’t know. But you are expected to buy the next generation. That’s how it’s been for decades. So what happens if the pattern finally collapses?

I think it’s interesting that when Blizzard made its announcement about Diablo III coming to the PS4 we also learned the game was coming to the PS3. When Bungie took the stage to announce exclusive PlayStation 4 content for Destiny they reiterated that Destiny will also be released for the PlayStation 3. Doesn’t this sound like a hedging of bets?

This is going to be a console generation about justifications, and Microsoft will have to answer the same questions I’m throwing as a consumer at Sony. Why should I upgrade? What will the PlayStation 4 offer me that I don’t already have and that I wanted but didn’t realize? 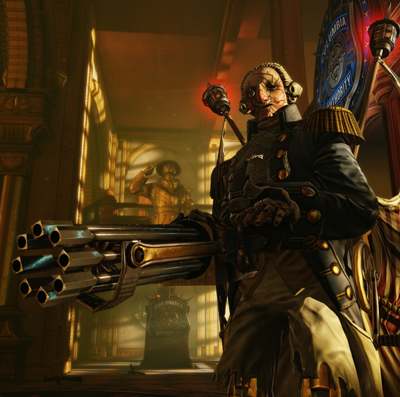 I keep thinking about BioShock Infinite and the bar-raising master class in immersion and emotion it has been touted as offering us. Let’s say it lives up to the hype. Infinite is going to run on current-gen hardware. What might the next generation of hardware offer up as an improvement on what Infinite is attempting to do? If Infinite succeeds, what does that say about the remaining potential in the current generation and the need for the consumer to move on to another console generation at all?

The average gamer is 35 years old, now. We’re not a bunch of children who need to keep up with the kid down the block. Moving to another console generation is a pain in the ass. It’s expensive. It means mothballing old consoles and/or finding a way to keep them hooked up to our televisions in tandem with the new consoles if there’s no backwards-compatibility (which is the case for the PlayStation 4). The concept of not upgrading is going to seem much more reasonable to a whole generation of gamers than in any console generation-jump since we’ve been gaming.

Sometimes the pain in the ass is worth it. The Wii gave us a whole new way to play videogames. The Xbox 360 introduced the most successful social network on a console yet. The PlayStation 3 was a substantial improvement performance-wise to the PlayStation 2. So far the Wii U has borrowed from preexisting tablet technology and merely caught up with HD competitors visually. Last week’s PS4 reveal demonstrates a console playing catch-up with interactivity and addressing the patching shortfalls of the previous generation (and little else – see our own Stu Horvath’s piece on Wired). I’m not seeing a reason to get excited yet about spending hundreds of dollars on new gear and new games for said gear without any promises of truly new experiences.

There’s one more punch to be thrown in round one of the new console wars, but unless Microsoft comes into the ring with something truly special, we may be looking at pure brand loyalty as the sole motivator for console upgrades. Nintendo fans will need the Wii U to play their Mario games, Sony diehards will grab the PS4 for Killzone and whichever other exclusive franchises toddle on and the Xbox crowd will likewise stay their course as well.

In the current generation, Microsoft is winning. Food for thought. I’m sure Sony is thinking about it, which would certainly explain a PS4 preview that felt premature and haphazard. Or it might be the 10 percent price drop in Sony shares following third quarter losses. There’s always that.

You can tell Dennis he is entirely wrong about this on Twitter: @DennisScimeca.

Beginnings in the Dead Space Trilogy

Where Is My Mind?