Harbinger is a pretty bleak series. The main character, Peter Stanchek, starts the series off by using his telepathic powers to do a reprehensible and unforgivable thing when he forces his childhood crush, Kris Hathaway, to fall in love with him and then sleep with him. To say Pete is flawed would be an understatement.

Pete is discovered by a man who has telepathic and telekinetic abilities on par with his own, Toyo Harada. Harada is the founder and enigmatic CEO of an international conglomerate that is dedicated to building a better world. The company also serves as a front for the Harbinger Foundation – a school for superpowered people. When the kids graduate, they use their powers to train others as well as perform clandestine missions across the globe – furthering 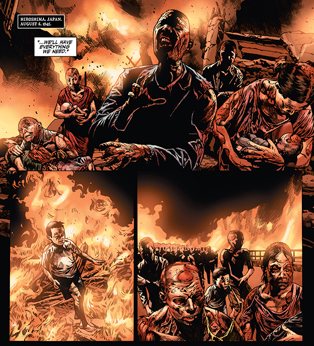 Harada’s goal of a more peaceful world. Here’s the thing, though – Toyo Harada is the bad guy.

Harbinger is a series about broken people who want to change the world. Toyo Harada wants to make the world a better place by any means necessary. So far, Pete has restored Kris’ mind to normalcy and discovered Harada murdered Pete’s best friend in order to manipulate him. When Kris discovers Harada’s plan, she decides to help Pete Stanchek assemble a growing group of renegade Harbingers to stop Harada from mindwiping and murdering his way to a better Earth. Precious little is known about Harada before Harbinger #0. We know he’s older than he appears, he values the people in his tutelage/employ and he has been keeping a prophet known as The Bleeding Monk hostage. To say Harbinger is morally ambiguous is like saying David Bowie is cool.

Set in both present-day Qatar and post-August 6, 1945 Hiroshima, writer Joshua Dysart and artists Mico Suayan and Pere Perez tell Toyo Harada’s origin in Harbinger #0. As Harada sends his youngest active Harbinger, Darpan, on a mission in Syria, he relays his own story to the boy via comm-link. Harada’s powers activated after the United States dropped the first atomic bomb on Hiroshima, Japan. Harada watches his mother burn in atomic hellfire while he is protected by some kind of bubble. He’s lost and confused. Everyone around him is burned, starving and unknowingly dying from radiation poisoning. All young Toyo wants is to find his father and now he has newfound abilities that may help him do just that.

Mico Suayan draws the 1945 sequences. His detailed style shows the horrors of a post-atomic bomb Hiroshima. The people are ravaged by radiation burns, contaminated water and a severe food shortage. It’s chilling. Harada spends the time afterwards discovering his powers and searching for his father. He finds Japanese soldiers selling food to survivors, so he uses his powers to make the soldiers give him all the food. He in turn parses it out to the people in an orderly and fair fashion – for free. He asks everyone he comes across if they know where his father is. Of course, none of them know, but his actions eventually lead him to an unexpected answer. 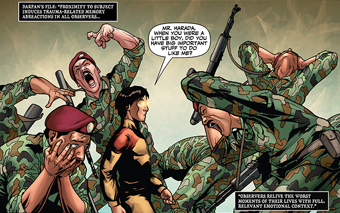 Pere Perez draws the segment that takes place in the present day. Here, Harada is having a young Harbinger by the name of Darpan infiltrate the Syrian president’s headquarters. Harada reassures Darpan, telling him how lucky he is to have the boy in his life. Perez’s clean lines have a brighter overall feel to them. There’s no desolation in sight, just thriving civilization in every panel. At least, until Darpan starts making all the guards and soldiers in the building recall their worst memories. Then the soldiers break down crying and kill themselves. One is so distraught he stabs himself in the face. It’s prettier, less down and dirty, but the horror glides all over.

Harbinger is a pretty graphic series and this zero issue is no exception. Whether it’s the mass suicides set off by Darpan’s abilities, death by radiation or a young Harada using his powers to burst bad people’s skulls, the comic is unflinching in its representation of both gore and the emotional consequences that gore has on cast. For a comic with a lot of exploding heads, Harbinger #0 is a pretty poignant character study. By the issue’s end, Harada is elevated to that plane of rare and most terrifying supervillain – he makes a compelling argument that humanity acts like a petulant child.

Harbinger #0 is available at your local comic shop today, or you can snag it on Comixology.

For a guy who enjoys exploding heads in his comics, @IanGonzales can be pretty poignant from time to time too.