About two weeks ago, I saw the final performance of Grace at the Cort Theatre on 48th St. in Manhattan.

When I signed in to the play on Foursquare, I got one of those increasingly familiar “this is your first time here since…” notices that always seems to declare, with eerie certainty, that my life is no more than a series of cycles.

As it does with so many other places I go – museums, parks, you name it – Foursquare was telling me it had been exactly one year since my last trip to the Cort Theatre, as if my soul knows it’s January so it’s time for Broadway, or that it’s May so I’m at the Met, or it’s September so I’m walking through Fort Tryon Park again. 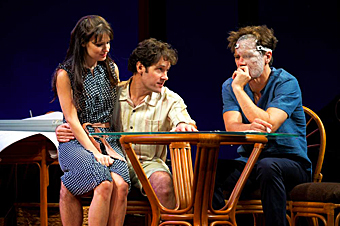 Sure, the weather has a lot to do with it. The winter makes indoor activities like the theater ideal. But before the house lights went down on Grace, I took a moment to think and I realized it has as much to do with another year beginning as anything else.

Unwinnable’s theme this week is beginnings, and for every beginning I have rituals. At the first hint of spring, I make a mix CD for friends of the year’s new music; the summer can’t start until I’ve seen a baseball game with my dad; the fall is about hiking to The Cloisters. The month of January means a whole new beginning, and for me the theater is the perfect usher.

Each year – without noticing it consciously until about two weeks ago – I make a promise to myself to live the next 12 months to the fullest – to take advantage of my city, to live a life full of art and inspiration and passion.

And soon enough, I’m sitting at the Cort Theatre watching Paul Rudd shoot himself during a crisis of faith turned homicidal or Laura Linney and Christina Ricci reconcile two extremely different versions of womanhood. My sojourns aren’t limited to the Cort Theater – so far this season I’ve seen Who’s Afraid of Virginia Woolf? at the Booth, Cat on a Hot Tin Roof at the Richard Rodgers, Golden Boy at the Belasco and Avenue Q off-Broadway at New World Stages. But the idea is the same:

It’s cold outside. It’s a new year. I live in the greatest city on Earth.

And I’m gonna start another cycle off with a bang.

Matt Marrone, for all his love of Broadway, despises musicals. But he’s not ashamed to admit he saw Debbie Gibson in Les Misérables. You can follow him on Twitter @thebigm.