At one point a few years ago, Nigel McGuinness was one of the greatest professional wrestlers in the world. But unless you were willing to expand your horizons beyond WWE, you probably didn’t know it.

Throughout The Last of McGuinness, McGuinness laments that he never made it to WWE. The same 15-year-old who went to Wembley Stadium in London for SummerSlam 1992, face painted like the Ultimate Warrior, would never get to compete on that stage. Wrestling for Ring Of Honor, arguably the top independent wrestling promotion in the US, McGuinness had matches that many fans consider modern classics against the likes of current WWE superstars Daniel Bryan (then “American Dragon” Bryan Danielson) and Antonio Cesaro (then Claudio Castagnoli). He did draw the attention of WWE talent scouts, and had signed a contract with the company at the same time as Bryan.

It’s an ending that perhaps shouldn’t have happened for McGuinness at all.

But a conflict between McGuinness’ doctors and WWE’s led the company to rescind their offer, and within a month McGuinness was wrestling for WWE’s direct competitors, TNA Wrestling, as Desmond Wolfe. Despite starting with an impressive series of matches against Kurt Angle in TNA, his career never took off. Faced with not being wanted by WWE, not wanting to return to TNA, and not being able to keep up physically in ROH, McGuinness opted to retire last year at 35, documenting his return to the independent scene for his last month of matches.

It’s an ending that perhaps shouldn’t have happened for McGuinness at all. At age 35, he is still perfectly healthy. Certainly, he is walking away from the business in better shape than some of his contemporaries. WWE Hall of Famer Edge, only a few years older than McGuinness, retired last year after being diagnosed with spinal stenosis. One only has to watch Mick Foley or the Iron Sheik walk to see what years of punishment will do to the human body. But McGuinness stressed in our interview, “I wasn’t influenced by the physical condition of any other wrestlers. The only thing that made me retire was WWE not being interested and having done everything else I could in wrestling.” 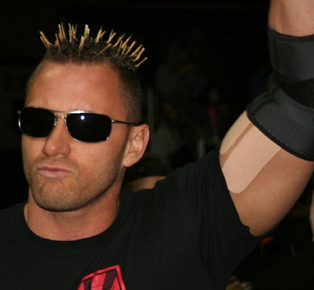 Much like life, it isn’t all pretty. There are many scenes of McGuinness crashing with friends when he can’t afford a hotel. There are small venues with smaller dressing rooms. There are scenes where McGuinness is stranded at airports waiting for rides. But as he wrote on his own blog shortly after the conclusion of his tour, “the colorful tapestry of experience, the memories of the people you met along the way, will always be there to make me smile, even when the dull ache of disappointment fades in the next weeks, months and hopefully years of my life.”

Through his journey, friends, colleagues and fans all tell him that getting into the ring and competing at a high level was enough of an achievement to be proud of. While McGuinness accepts that now, the frustration of not hitting the big time gets to him at times during the film. On camera, he tends to wait until he’s alone before venting, including one session two nights after his final match in front of 200 fans in West Virginia, the same weekend that Bryan won the WWE World Heavyweight title. The timing provides an interesting juxtaposition and has invariably led a number of fans, and clearly McGuinness himself, to wonder “what if” – but ultimately, McGuinness realizes his place in the business, and knows that he can do a lot for his younger opponents on his retirement tour by putting them over. “It was my choice how the matches turned out,” McGuinness told me.

McGuinness also uses the film as a platform to rail against unnecessary bleeding in pro wrestling. Using fellow indie wrestler Andre Hart (who tested HIV positive in 2009 and is serving a 32-year prison sentence for having unprotected sex without informing his partners of his HIV status) as an example, McGuinness describes the risks of contracting blood-born 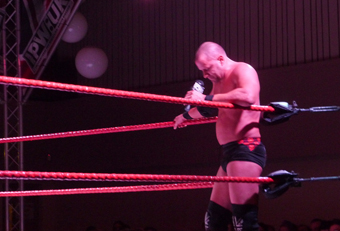 e illnesses as foolish. It hits a bit close to home for McGuinness, both because he knew Hart and because rumors abounded when he announced his retirement that he was doing so because of a blood-borne illness – either HIV or hepatitis. The risks, of course, seem completely obvious now, but it doesn’t stop some wrestlers (or even a ring announcer at one show) in the documentary, from making themselves bleed intentionally. It’s a scary sight, and McGuinness’ reaction is understandable.

Ultimately, while the movie focuses on the end of McGuinness’ run, it does show that through the process of mourning for his career there is still something better ahead for him. While he never made it to WWE, his indie career saw him draw a small yet devoted fan base, without whom The Last of McGuinness may never have seen the light of day. A Kickstarter campaign launched by McGuinness helped fund the editing and printing of the film, and gave him the encouragement to take the next step in his career. In that light, it’s a scene from the road about half an hour into the movie that will most stick with me. McGuinness, travelling with former WWE wrestler Carlito, stops in Ohio to see the large oak tree and rock wall featured in the film The Shawshank Redemption. Like Andy Dufrene before him, McGuinness crawled through a river of shit and came out clean on the other side.

Follow Don Becker on Twitter @unwinnabledonb. The Last of McGuinness is available for purchase now from http://nigelwrestling.com. That and ROH’s collection of matches between McGuinness and Danielson are must-owns for any wrestling fan. While the current cut is geared towards wrestling fans, McGuinness plans to recut the film for the general market in 2013.