That’s right, my Windom Earle-as-Log Lady costume – which would never have come to be if it weren’t for Hannah’s major shopping and makeup assist – was judged by a celebrity panel to be worthy of a Twin Peaks prize pack and a chance to soak in a resounding ovation from 200 of my fellow Peakers as I accepted my award.

Oh, how the tables have turned from my epic fail at the trivia contest!

Though I was toppled by two lovely ladies from Chicago – who dressed as a fish and a percolator – it hardly seemed to matter, as I spent most of the night posing for pictures and drawing laughs, winks and high-fives from a supportive crowd.

In fact, when I approached Michael Horse (Deputy Hawk) for an autograph and a photo, he stopped me immediately – and asked to take my picture.

Most gratifying of all? The judges, who gave my costume a resounding thumbs-up, were an All-Star cast of Twin Peaks alums:

• Robert Engels (show writer as well as co-writer of Twin Peaks: Fire Walk With Me)

I had a chance to speak at length with each of them about the show (although Hannah’s lengthy chat with Phoebe about misogyny was by far the night’s best powwow) and found them both enthusiastic and gracious. Still, the fact that they, in turn, deemed me worthy of a signed Richard Beymer (Ben Horne) behind-the-scenes photo print of Frank Silva (Bob) – which, hilariously, scares the ever-loving shit out of Hannah – plus some other swag I haven’t had time to look over yet, made it all the more special.

Day 2 of the Fest began with a three-hour bus tour of Twin Peaks filming locations – which, when I booked my ticket, was the biggest selling point of the weekend.

It didn’t disappoint. Among the many highlights:

The Twin Peaks Sheriff’s Department: Now the DirtFish Rally School, the employees of this fine establishment were totally cool with a group of Twin Peaks freaks wandering around their offices snapping pictures. Besides the obvious external shot, we also grabbed pics of Lucy’s reception desk area just inside the front entrance and some eerily familiar-looking back rooms, though we couldn’t quite put our finger on which ones were which.

The Packard Saw Mill: Which, interestingly enough, is right across the way from the Sheriff’s, although sadly just about all that remains of it is one of its two signature smokestacks. 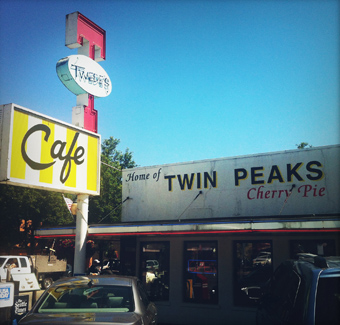 Ronette’s Bridge: The railroad bridge where Ronette is seen wandering, dazed after Laura Palmer’s deadly encounter in a railcar, features some fun Twin Peaks-flavored graffiti etched along its railing, including “Agent Cooper is a babe” and “Don’t take the ring Laura.”

The Salish Lodge and Snoqualmie Falls: Where I took obligatory iPhone video sweeping from the Salish (The Great Northern) down the waterfall, to mirror the sequence of the Twin Peaks opening credits. I was far more proud of myself for this than I deserve credit for.

The Log: The giant centennial log, a local landmark that’s also featured in Twin Peaks‘ opening credits, now has bars around it to protect it from the hordes.

The Hurley House and Big Ed’s Gas Farm: Though the gas farm is now a garden store and hardly recognizable, the Hurley House across the street doesn’t seem to have changed much. I posed in front of it — with my hand covering my eye, Nadine-style — wearing my “I Log Twin Peaks” T-shirt, which, by posting on Twitter with the hash tag #tpfest, automatically made me a winner in WelcomeToTwinPeaks.com’s T-shirt photo contest. So I’ll be receiving another prize in the coming days. (Go me!)

The Famous Bend in the Road: Where the Welcome to Twin Peaks sign was located in the show – and still is today, thanks to some locals who built a replica as a photo op.

Twede’s Cafe: Otherwise known as the Double R Diner – and the most recognizable Twin Peaks landmark – this was where we gathered later with a few folks from our tour and had lunch. I ordered the ridiculously monstrous Twin Peaks Burger, Twin Peaks Fest cherry pie No. 2 and “a damn fine cup of coffee.”

And yes, that was exactly how I asked the waitress for it.

The celebrity dinner/Q&A session went by like a blur as I waited, nearly sweating through my wig, to prance across the hall in my costume – but later we met up for drinks at a local bar to keep a great night going.

Remember when I said the bus tour was the weekend’s biggest selling point? 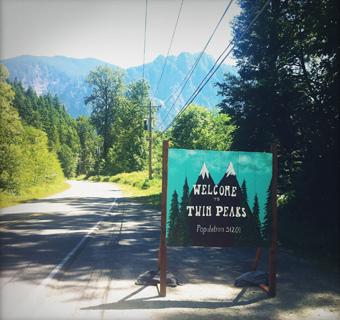 Hannah and I have made a host of new friends – from the west coast to the east coast to across the pond – and by the end of the night, the two of us had split up to go to separate post-afterparty events before ultimately regrouping for a cabin party in the wee hours of the morning at our B&B.

Somehow, I ended up on a legendary midnight road trip to deep-in-the-woods Twin Peaks locations with, among others, the two ladies from Chicago who had worn the fish and percolator costume.

The juicy details? Well, they were actually pretty goddamn juicy …

Today is Day 3, the final day of the Festival, and we’ll be convening for a farewell picnic before checking in to the Salish Lodge and hopefully having a big, fancy dinner with some of our fellow Peakers.

And then? It’s back to reality. But let’s not think about that just yet.

One more day to go! I’ll check in tomorrow to wrap things up.

Hannah (I Have Opinions, Too!) Castillo’s take: Hello readers, I have a spectacular announcement to make. Coming in 2014 will be the first-annual Buffy the Vampire Slayer convention – Slayerfest. We look forward to your attendance! As if I could not love Twin Peaks fandom any more, it turns out that some of them also share my love for Buffy the Vampire Slayer. I was treated to a mini-convention of my own this weekend – and plans are now forming for a formal con in two years’ time. Anyone have Sarah Michelle Gellar’s phone number?

One of the highlights of Day 2 was being able to have long, in-depth conversations with Horse and Augustine. I spoke to Horse about being one of the only people of color on the show, and had the aforementioned chat with Phoebe about misogyny on the show itself as well as on set and in Hollywood. They both provided awesome insight and I felt lucky that they were so open and honest with me.

Although it tugs at my heart a bit, I am looking forward to our farewell picnic today, and visiting all the great friends I made here in the future.