As an icebreaker yesterday morning, I figured what better way to introduce myself – Unwinnable’s very own lanky, clown-footed, self-effacing mascot – than by embarrassing myself while everyone watched. 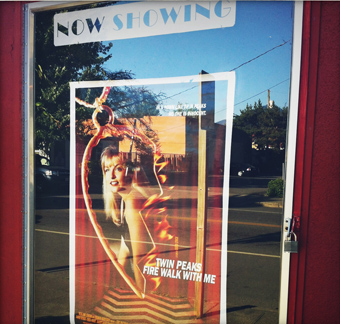 That’s right, Fest-goers: I’m the guy who got laughed right out of the Twin Peaks trivia contest.

I hate trivia nights. I have a terrible head for facts. I can’t remember character names or details, even right after watching or reading something.

But, hey, I took a plane across the entire continental United States to be here, so it seemed a waste not to take full advantage of all the Fest has to offer, to dive right in, and to succumb to Hannah’s well-intentioned chiding – my comfort zone be damned!

The question I received, when my turn came around to stand before a hall full of Peaks geeks, was so simple even Hannah the casual fan told me later SHE knew the answer.

I had known the answers to some of the questions that had come before, posed by the quizmaster to the brave souls who decided to sign up for the big opening event of the weekend. Even as others were eliminated on their first go, I took some comfort in the knowledge that had I gotten their question, I would have advanced. But when my turn finally came, and I stood up in front of the group and gave my wrong answer…the entire room laughed at me.

It was worst-case scenario. An Adam Sandler skit made real.

What was the question? You’ll have to ask Hannah. I’m used to the Internet mocking me, but this one’s still a bit too raw. Plus, I’ve already forgotten it. Seriously. That’s how bad my memory is. A traumatic moment, one that will no doubt scar me for days, and I’ve already forgotten the specifics. I’d like to tell you I’m not sure I ever even knew the question, though I doubt you’d buy that. All I know is that I was so nervous, so unable to gather my faculties, that I said the first dumb thing that popped into my head.

A man who can barely remember his phone number doesn’t have the wherewithal to answer trivia questions under pressure.

But at least my bad memory is one reason I’ll get over this. 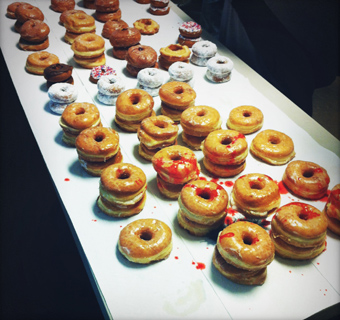 There was some down time after the Fest’s opening ceremonies — during which we were served blood-spattered donuts arranged Twin Peaks Sheriff’s Station-style with feathers strewn all around, and had our first crack at buying some souvenirs – and Hannah and I, along with three new Peaks buddies (two of which, a couple from Portland, are staying at our B&B), followed one of the Fest’s organizers on an unofficial pre-tour tour of Twin Peaks locales.

Our first and most notable stop? Leo and Shelly Johnson’s house.

From there, we blazed our own trail, taking in a few sights that won’t be on today’s bus trip – and grabbing a sneak peek at a few sites that will.

• The Great Northern Hotel (aka the Salish Lodge, where we’ll be staying tomorrow night)

• The former site of the Fat Trout Trailer Park

• And last, but by no means least, the Fall City Roadhouse (aka The Roadhouse), where we had a long, relaxing lunch … and I had, say it with me …

At 7 p.m., we convened at the North Bend Theater, a small arthouse movie venue, where we watched several Fest-related videos, some hilarious Japanese-targeted Georgia Coffee ads featuring the cast of Twin Peaks…

… got introduced to the Fest’s featured guests (among them, as we reported yesterday, Deputy Hawk and The One-Armed Man), and, after a 15-minute intermission, watched a special screening of Twin Peaks: Fire Walk With Me, a film that is now exactly 20 years old, and which Hannah hated with a fiery passion (see her note below).

For its part, North Bend did itself proud. The theater’s lobby was decorated with various Peaks-related props – which we later found out had been constructed, unsolicited, by one of the theater’s employees – and the old-timey marquee outside welcomed Fest-goers, one and all. 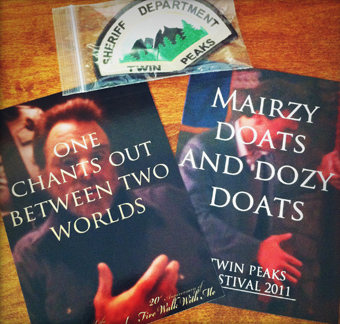 Today, we start bright and early with a 9 a.m. bus tour, hitting many of the show’s most iconic spots over the course of three glorious hours, during which I will attempt, for Hannah’s sake, not to continuously squeal like a 13-year-old girl.

Afterward, we plan to hit up Twede’s Cafe (aka The Double R Diner) for some more pie – it’s where Agent Dale Cooper would eat his, after all.

Then it’s a big night of Festing fun, including some schmoozing with celebs, drinking ourselves into oblivion …

…and the long-awaited costume contest.

Where I will yet again have a unique opportunity to mortify myself.

You can be sure I’ll report back tomorrow with all the painful details.

Hannah (I Have Opinions, Too!) Castillo’s take: “I found the Twin Peaks fandom to be, by far, one of the nicest, most open and socially adept of any fandom I’ve yet encountered. Said fandom may be misdirected, but I can’t fault them too much for liking the TV series. Fire Walk With Me, however, is an abomination. Instead of getting into a 10-minute rant on misogyny and rape culture in America, I will simply say that I fucking hated this movie. I thought it was disgusting. However, I had a great time. All 13 hours prior to the film? Excellent! And Matt? Matt is awesome because he took me outlet shopping after lunch. (I got a great deal on a Coach bag.)”