On Team Unwinnable’s recent trip to Los Angeles for E3 2012, one thing had us in a quandary – transportation. We were staying about two miles from the L.A. Convention Center, in a neighborhood called Echo Park, and a lot was going down at the same time as the expo – the Stanley Cup, a presidential visit and gay pride, to name a few. After paying roughly $70 in cab fare from the airport to the Unwinnable villa, we were a little wary about how we were going to get to the convention on a daily basis and how much it was going to cost.

Lucky for us, someone had Uber. 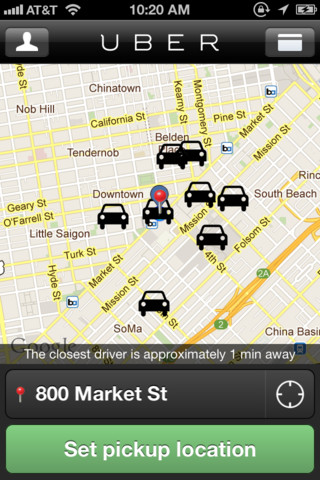 Consider Uber your app to a personal chauffeur. First, the app uses your phone’s GPS and map system to locate you and drivers in your area. It also gives an estimated arrival time time for your driver. Once you select a driver, you have a small window to cancel the ride without being charged a penalty, which comes in handy when plans change on the fly. As your driver approaches, Uber provides not only their name, but also their photo, the license plate number and their cell number.

After the ride is over, your credit card is automatically charged and the receipt for the ride (tip included) is sent to your phone along with a rating request. We learned that as you rate the driver on a scale of one to five stars, the driver also rates you, too. This simple and effective system eliminates deadbeats from Uber‘s system.

It is also nice to arrive in a Town Car, SUV or even a high-end vehicle like a BMW instead of a yellow Caprice. One of our drivers, a member of Homeland Security, informed us that safety is a major factor of the ride. It’s not just about dropping you off and leaving you to the wolves.

Out of my many Uber rides, only one was bad. The driver was either trying to take advantage of us or simply didn’t know where he was going. Luckily, after a complaint through the rating system, we got a refund of $15 for the poor service. You won’t get that with a yellow cab.

We had some very memorable drivers. Stu and I both had a driver named Don – he is a classy guy and the ride with him was super smooth. I felt like a bigwig pulling up to the convention center in a Town Car with him as my personal driver.

After some debauchery at a Sony party, Chuck and I hailed an Uber driver who pulled up in an Escalade and proclaimed, as we opened the door, “I am the fucking Honey Badger!” This was going to be the ride to remember. Not only did he share a video of the honey badger with us off of his cell phone, but he also offered to pick up women for us, plugged in Chuck’s MP3 player and got us back to our HQ super fast. There was some interesting conversation in the back of that truck that I will save for another time. Amazingly, out of all the Uber drivers in Los Angeles, the Honey Badger picked up some of our crew again on Thursday evening. They sped off to Jumbo’s Clown Room to the sound of Metallica’s Kill ‘Em All. It was a perfect match.

While Uber is very active on the West Coast (it originated in San Francisco, naturally), it can be found in other major cities. When I landed in Newark, I brought up the app just to see if drivers were as abundantly available as they were in California. I got one driver. It is currently similarly difficult to get an Uber car in Manhattan. Regardless, this could revolutionize the limo experience – it could eliminate faulty and illegal drivers that seem to flood the streets and will give the yellow cabs a run for their money. New features, like the ability to request a stretch limo or SUV, only make the app even more valuable.

My only suggestion is that “California Uber Alles” should be played every time I order a limo.

Uber is available for Android and iOS smartphones for free, but requires credit card information upon sign-up. Ken’s looking for the rare Los Angeles #HoneyBadger. Follow his exploits on Twitter @Kursse.