It was an unseasonably mild day on Long Island when the death knell for unlimited data finally sounded. Dan Imperiale sat in my dining room eating breakfast, and I made my way to the Verizon store to pick up my Samsung Galaxy Nexus. It was the last of the three most anticipated 4G/LTE phones on Verizon’s network, the other two being Motorola’s Droid RAZR and the HTC Rezound. Sure, Verizon had released several LTE phones before then, but the Nexus, RAZR and Rezound were heavily hyped for months. The success of these three phones, as well as the Droid RAZR MAXX that came out a few months later, put a strain on Verizon’s 4G network infrastructure. For the most part, Verizon has done an acceptable job of responding to that strain. I haven’t noticed any dropouts on the scale of AT&T’s 3G network when the iPhone 3GS came out, for example. But, clearly, someone at Verizon has worries. Those worries were apparent when Verizon did away with unlimited data for new contracts last July, but those of us who were already on unlimited data plans were safe. Bonus: Upgrading to a 4G phone grandfathered us lucky folks into unlimited 4G data.

But according to Verizon’s CFO Fran Shammo, the gravy train will stop soon. At a conference a few weeks ago, Shammo announced that Verizon intends to do away with the grandfather clause – and soon. If you have a 3G smartphone with Verizon and you’ve been thinking of upgrading, now may be the best time, even if this isn’t official policy yet. (Note: None of us at Unwinnable actually work for Verizon.) 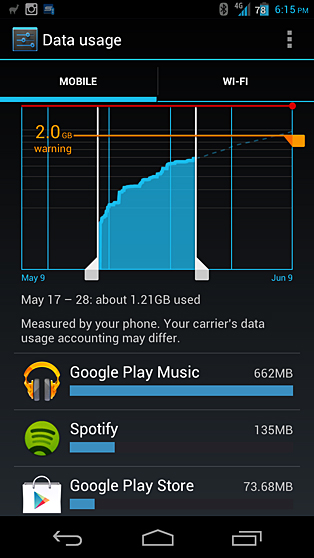 Such a move is both inevitable and disappointing. Inevitable, because both AT&T and T-Mobile have moved away from unlimited data entirely, leaving Sprint as the only major provider in the U.S. to offer that option. Disappointing, because so many smartphone ads hype the data-sucking features of the phone as their major selling points. Always-on e-mail! Facebook! Twitter! Skype! Netflix! Google Music! Spotify! Turn-by-turn navigation! It’s a common problem: Marketing promises what engineering can’t (or won’t) deliver. Yet it seems completely disingenuous to tempt potential customers while alternately hoping they go over their monthly allotment so you can charge them more, especially in this day and age when phones are used more as mobile data communicators and less as actual phones. Right now, the only people that actually call my cell phone with any regularity are my wife and older brother. Everyone else finds some text-based manner to reach me, whether through SMS/MMS, Facebook or Google Talk.

Of course, customers don’t necessarily have to fly blind. Verizon offers apps and widgets to monitor data usage (though, unfortunately, not in real time), and you can always get info from their website for updated stats. Ice Cream Sandwich, the latest and greatest version of Android, also monitors mobile data usage, with the caveat that Verizon might calculate it differently, and they’re the ones who send the bill.

At this point, though, what’s the option once Verizon pulls the trigger and puts unlimited data out of their misery? Jumping to Sprint is a tempting alternative since they offer unlimited data, but they’ve already failed one 4G network rollout (they ditched WiMAX for LTE in 2011). And frankly, even Dan Hesse might say enough is enough and do away with unlimited data as well if their LTE network experiences the same pains that others have. T-Mobile claims to still offer unlimited data, but with serious speed throttling once you reach 2GB or 5GB per month, depending on the plan. AT&T offers tiered data. The multitude of pre-paid providers all piggyback on either AT&T, T-Mobile or Sprint’s networks, and none of the pre-paid providers offer unlimited data. Basically, we’re left with two choices: hope that Verizon doesn’t pull the trigger any time soon, and thus get grandfathered in, or buy phones off-contract, either directly from Verizon (at a huge markup, of course) or from a third party (which carries its own risks if you combine a bad ESN on the phone with an unscrupulous seller).

This, of course, highlights one of the biggest deficiencies of U.S. cellular networks. The carrier has all the power. They sell the devices, they sell the plans and you will have a very difficult time taking a phone from one carrier to another, if it even works at all. Google is trying to change things a bit by offering their Galaxy Nexus as a direct purchase from the Google Play Store, but only on GSM networks, much like the unlocked Apple iPhone that can be purchased from the Apple Store (the Nexus works on T-Mobile and AT&T the iPhone is only supported on AT&T). They tried this once before with the Nexus One in 2010 but gave up when there was confusion as to who was providing support for the device: T-Mobile, the carrier; HTC, the manufacturer; or Google themselves. It was never resolved to anyone’s satisfaction, so the next reference phone Google offered, the Nexus 4S, was sold through T-Mobile.

Unsurprisingly, the Galaxy Nexus purchased straight from Google is sold without a plan, carrier subsidy or, most importantly, the requirement to sign a new contract. If Google and Apple can figure out a way to do this for Verizon and Sprint’s networks (CDMA is its own bundle of patent clusterfuckery, so the current environment makes that next to impossible), that might be the answer. If the carriers lose some of the power they have over the process, the hardware won’t matter as much as the quality of service. And then someone might realize that an unlimited data plan is a serious drawing point.

Don’t worry, folks – @UnwinnableDonB reads all his tweets over WiFi.