The easiest way to describe any game is to say, “It’s kind of like a mash between…” and then list a series of other games or genres. It’s a nice, simple and compact way to describe a game that lets someone who hasn’t played it imagine the best aspects of those other games all sitting together in a neat, cohesive union. That said, when I say that Nyarlu Labs’ Forget-Me-Not is best thought of as a roguelike-Pacman-shooter, I’m not thinking about how it brings the three styles together smoothly, but how the tension between the three gives the game a sense of forever being on the verge of falling apart.

As a little, square man-thing, you navigate through procedurally generated mazes collecting flowers and shooting monsters. Once you collect all the flowers, you must take the level’s key to the lock that appears and go down to the next level.

Ultimately, Forget-Me-Not is a game of chaos.

It sounds straightforward, but its surface simplicity hides layers of messy strategy. To master Forget-Me-Not is to understand a complex interplay of systems, to comprehend not just what you can do but also what you cannot do and, most crucially, what you can’t help but do. Ultimately, Forget-Me-Not is a game of chaos.

For instance, you cannot stop moving and you cannot stop shooting. On levels that wrap around themselves (where going off the left side of the screen brings you back on the right side), this can easily mean you end up fatally shooting a dozen bullets into your own back. But then you can pick up the level’s key that acts as a rear shield, deflecting all bullets, be they your own or a monster’s – until another passing monster steals it from you and you don’t realise until you are again shooting yourself.

After a while, you begin to understand more advanced tactics like grinding. Lifted from the Pacman skill of grinding walls to turn corners quicker, grinding a wall in Forget-Me-Not can charge you to pick up s 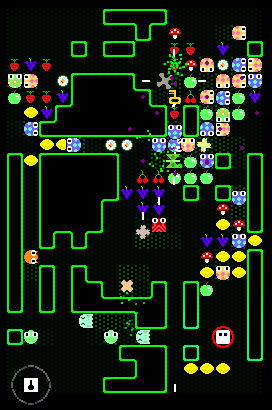 peed and even ram right through enemies – but charge up too much and your little man-thing could end up exploding.

Then there is the scoring. Flowers are worth n2 points, where ’n’ is the number of flowers you gather in a single streak. The moment you run over a space with no flowers on it, the streak is over. So one flower is only worth a single point, but three flowers in a row will gain you nine points, and 10 flowers will net you a hundred points. So you try to weave long paths through each level, mapping out a path that will prevent backtracking or dead ends for as long as possible to collect the most flowers you can.

Meanwhile, you are avoiding and destroying the monsters that pop up during each maze. The multitude of varied enemies, more than any other attribute, make Forget-Me-Not feel consistently fresh. Some wander around the map eating flowers; some shoot anything in sight (including themselves); some explode and take out entire sections of the maze walls; some leave a trail of congealed gel, blocking paths and flowers alike; some duplicate when they are shot, quickly infecting entire quadrants of the maze. The same maze can be a radically different experience depending on what enemies decide to appear.

The enemies also lend the game its mesmerising ‘music’. In lieu of any actual backing track, each enemy has its own unique sound effects that all come together in a mess of 8-bit, muffled, chaotic noise. As more and more monsters appear on a map, the tempo of the noise raises as bombs explode and shots are fired and flowers are stolen. The ‘music’ emerges in the cacophony of interactions spread out across the maze.

Really, ‘cacophony’ probably describes Forget-Me-Not better than any other single word could. For a game that seems so simple and basic on the surface, to play Forget-Me-Not is to juggle a whole heap of interrelated systems – some of which you can control and many of which you can only tolerate. There is so much happening at any one time, so much that you need to be aware of. In turn, it is one of the most rewarding experiences available at the App Store. Constantly fresh, and constantly in utter disarray.