It is always exciting to hear that there’s new stuff coming by Peter Bagge. I first became aware of his work through Hate, his hilarious Harvey Award-winning comic series, which still continues in annuals. Word of a new project is a cause for celebration, even before it hits shelves. 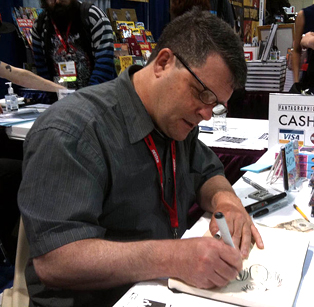 Reset is Bagge’s new four-issue series from Dark Horse Comics. In the first issue we are introduced to the protagonist, a washed-up comedian and actor with anger problems named Guy Krause. Guy is hard up for cash and ends up participating in an experimental program where test subjects relive and are able to alter key moments of their lives, while being strapped into a virtual simulator chair. Each chair comes equipped with a reset button, just in case you need to start the situation over again. While it sounds like a science fiction story, Reset is really more of a dark comedy concerned with the events that led Guy to this low point in his life

Unwinnable recently had the opportunity to speak with Peter about Reset, the first issue of which hits stores April 18.

Unwinnable: Initially, Reset comes off as a science fiction story, but with this issue we are already getting to know a lot about the flawed protagonist Guy Krause and how terrible revisiting a person’s past can be. Considering how mortifying the process has been for Guy by the end of issue one, is this going to turn into a horror story?

Peter Bagge: Ha!  Almost.  I don’t want to give the ending away! I did envision it being more techy and in the virtual world at first, but the real part of Guy’s life wound up being more interesting to me.

Unwinnable: Is Guy the most flawed lead character that you’ve created? It seems like he has a mountain of problems at the outset of this issue, and loads of anger to go around.

P.B.: Oh jeez, I think you just described ALL of my protagonists. He’s unique in that he made a success of himself before the story starts, though we get to watch him slide backwards.

Unwinnable: While Hate and The Bradleys told more comedically awkward slice-of-life stories, Reset steers more towards genre fiction, like Other Lives and Apocalypse Nerd. It also still manages to have a comedic voice and humorous situations that call back to those earlier books. What attracts you to telling an end-of-the-world story or a cyber-thriller?

P.B.: Well, the fiction stories you mentioned are all still 100% plausible, however outrageous the plot lines get at times. I have a hard time completely leaving reality and writing pure fantasy. Fantasy is boring to me!

Unwinnable: What were some of your inspirations for this series? A 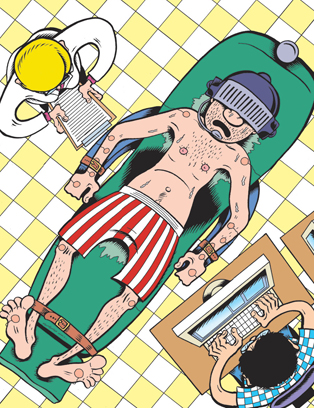 Clockwork Orange is jokingly referred to, but there is also a washed-up celebrity, reality TV vibe that Guy possesses.

P.B.: It really wasn’t inspired by any other work, at least not consciously. It just evolved with me playing “what if” in my own head.

Unwinnable: Guy is debating taking part in a reality series. These days they’re impossible to avoid – what are your thoughts on the genre?

P.B.: Not a fan in general, but only because they’ve become so formulaic. The field still has endless possibilities, but Guy himself is trying to resist taking part in more of the same.

Unwinnable: You’ve tackled Internet paranoia and Second Life-style videogames before, specifically in Other Lives. What would you say your current relationship is with the Internet and social media?

P.B.: I’m actually not too wary of the Internet and never have been. I do try to be careful of what I say or how much I reveal of myself online, mainly because I can’t believe how reckless and thoughtless people can be online, even people my age. Also, I have always been struck at how lost and detached from reality some folks get while online. It’s both horrifying and fascinating, though that’s something I covered more in Other Lives.