The following is the latest in a series of journal entries chronicling the author’s descent into next-gen gaming degeneracy – from getting his first television in years to trying to figure out why the @$@$&@@ you need two goddamn directional pads just to walk down a fucking hallway.

There was no Rookie of the Year booth at Geek Flea 3.

Instead, I had Unwinnable copy editor extraordinaire Sarah Feinsmith surreptitiously place flyers (made with Phoster for iPad) across First Presbyterian Church of Arlington, inviting attendees to interview me.

A few people found the posters humorous, but besides a photo taken of me with Spongebob that got a little bit of publicity, I have yet to appear in any glossy magazine features or even in the Kearny, N.J., Pennysaver (remind me to check Patch.com after I’m done writing this).

Still, I did manage to have a few interesting conversations and run-ins with my fellow Flea-goers, which I have decided to recount in this space:

Flea-goer GIA GRILLO: In our first-ever meeting, I told her I knew Hoboken’s sex shop “very, very well” and then attempted to stick a piece of her magnetic artwork to the side of my head. When it awkwardly slipped off and landed with a thud on the gym floor, I quickly made a break for it, telling her from over my shoulder, “I’m going to cut my losses now.”

Nice to meet you, Gia! Now you know me very, very well.

Flea-goer KEN LUCAS: Ken and I got into a little bit of a tussle, which you can see below. 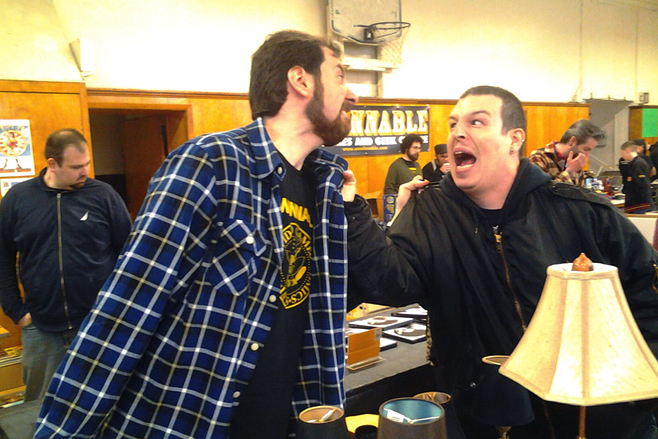 I’d like to say this was a picture taken entirely in fun, but alas, we are now mortal enemies after Ken told me Bob Dylan is not God and I accused him of trying to impale his customers with his homemade lamps – which he lovingly crafted with sharp, pointy edges that go from dangerous to potentially fatal when you consider the fact that half the time you’ll be reaching for them in the dark.

Flea-goer DON BECKER: Don and I discussed the value of paperback books with his signature on them, and I asserted that he wields great financial power by being the sole source of his own John Hancock.

But mostly, I just burned in silence as he won every last goddamn raffle prize of the day.

Flea-goer BRIAN TAYLOR: The dude came all the way from Pittsburgh in order to attend Geek Flea. I don’t think making fun of him here is necessary.

Flea-goer STU HORVATH: I passed his booth and for a moment marveled at how, though we are so very different, we share such similar childhood toys, right down to the scuff marks on that oversized rubber Hulk Hogan Wrestling Superstars action figure and the awesome arm-slinging action of He-Man’s Fisto.

Then I remembered those were MY beloved childhood toys, which I sold to Stu and he is now turning for a profit.

Flea-goer STU HORVATH’S MOM: …Is a lovely lady and a voracious reader of this column, with whom I posed for a picture and from whom I bought a yummy baked apple tart. 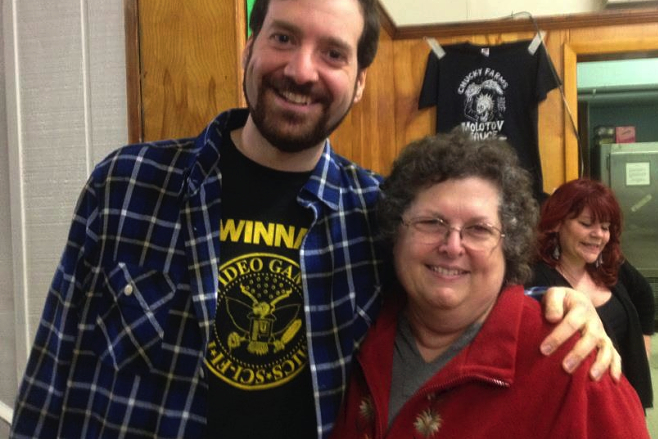 Flea-goer JOHN MCGUIRE: Hambone, who was my New Year’s eve kiss this year, always ends up hugging me multiple times whenever I see him. I’m sure he does this to everyone, but it makes me feel special nevertheless.

I have no desire to make any jokes about this.

Flea-goer CHUCK MORAN: Sticking to the touchy-feely theme for just one more minute, Chuck told me my Maccone posters were hilarious or badass or all day or something like that, which I take as high praise indeed from the talented host of – say it with me – Unwinnable’s soon-to-be-award-winning podcast, Unlistenable.

For which I give my readers permission to drop everything and download right this very minute.

I know you’ll want to skip all the episodes I’m not on, but I advise against it. They often talk about me behind my back.

Flea-goer MARK MARIANO: Even though he was loathe to do portraits, he did do a birthday drawing of my sister based on an iPhone photo and the knowledge that she loves trees.

Flea-goers WHOSE NAMES I DIDN’T WRITE DOWN: I bought a bracelet made out of old vinyl with Laura Palmer’s face on it from one of you and, from another booth, some Doctor Who action figures – all items for my friend Hannah, whose birthday party I had to leave early for.

Thanks for saving my ass, strangers!

Flea-goer IAN GONZALES: Gonzo told me he is planning to move to California next year. Did I wish him luck? Of course.

Did I then buy his Thor action figure and say I hope the money helps him move the hell away even faster?

Flea-goer DANIEL IMPERIALE: Dan took my picture with Spongebob. I also asked him to email me hi-res versions of every photo he took of me so I could cover my bedroom walls with them in fancy frames, because, “I like to feel like I’m sleeping inside one giant photo of myself.” 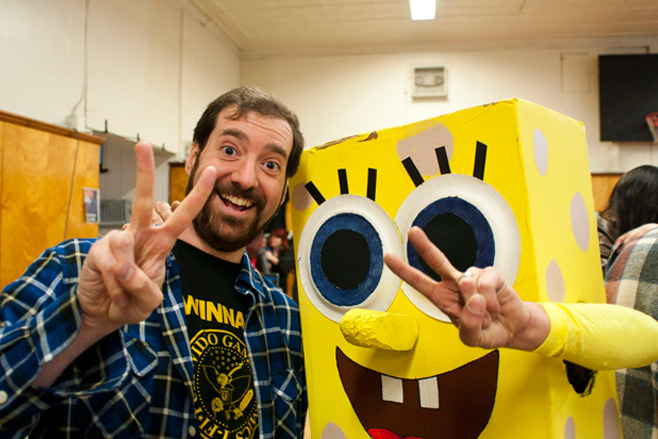 Matt Marrone thinks he will indeed rent a Rookie of the Year booth next Geek Flea so he can continue to say dumb things and embarrass himself, just in a vaguely more professional manner. You can follow him on Twitter @thebigm.

Rookie of the Year, Technology