Cartoonist and creator’s rights advocate Jerry Robinson passed away on the afternoon of December 7, 2011. He was 89 years old. If it weren’t for him, the landscape of geek culture wouldn’t be what it is today. As a teenager, Robinson left two indelible marks on not just geek, but popular culture as a whole.

Hired by Batman creator Bob Kane in 1939, Robinson began his career as a letterer and quickly rose to become the primary inker on Batman. He was 17 years old. Robinson co-created boy sidekick Robin and he created the Clown Prince of Crime, the Joker. Both characters have come to represent two very different sides of the American pop culture icon, Batman. He also contributed to the creation of Bruce Wayne’s long-suffering butler, Alfred, and Batman’s friend turned foe, Two Face. 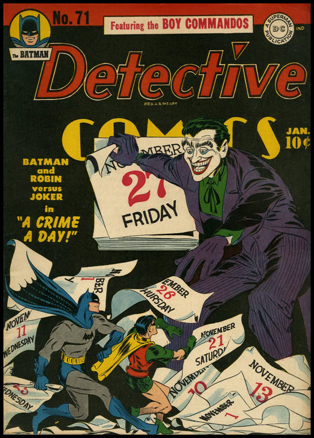 In 1943, he took on primary penciling duties on Batman and drew some of the most iconic images of Batman, Robin and the Joker. Without his contributions, we may never have seen characters like Green Arrow, Speedy, Kid Flash, The Teen Titans – heck, there may never have been a Silver Age. Without the character of Robin to balance the always grim Batman, superhero comics may never have survived the swath of censorship brought on by Dr. Fredric Wertham’s Seduction of the Innocent. Think about that for a second. Without a Silver Age, there’s no Watchmen, no Doom Patrol, no Amazing Spider-Man – nothing. Comics would be a completely different landscape, if they would even exist at all.

Robinson’s contribution to our culture is not just limited to creating pop culture icons – indeed, his greatest achievements came in the realm of creator’s rights.

In the 1970s, Robinson came to the aid of ailing Superman creators Jerry Siegel and Joe Shuster. Siegel and Shuster were battling with DC Comics for the rights to their creation, the Man of Steel. If not for Robinson and his high-profile publicity campaign, Siegel and Shuster would have faded into obscurity – unrecognized. Instead, in 1975, Robinson rallied support around the creators, which resulted in lifetime stipends and credits in each and every story in which Superman appears. In 1978, Robinson went on to found the Cartoonists & Writers Syndicate/CartoonArts International, which exists to this day.

Jerry Robinson would also be one of the first to curate art shows featuring comic book art at fine art galleries, a pursuit which led to him putting together the book The Comics. A new edition is currently available from Dark Horse Comics.

Robinson won many awards in his life for his comic book work. They include the National Cartoonists Society 1956 award for the Comic Book Division, their Newspaper Panel Cartoon for 1963 and their Special Features Award in 1965 for his newspaper strip, Flubs and Fluffs.  He won the NCS’s Milton Caniff Lifetime Achievement Award in 2000. He was inducted into the Comic Book Hall of Fame in 2004 and won the Sparky Award from the Cartoon Art Museum at San Diego Comic-Con International this past summer.

Without Robinson’s efforts, comic book characters and their creators would not have the recognition they have today. Creators and fans alike owe Jerry Robinson an impossible debt of gratitude for laying the foundations and preserving the dignity of that which we love. Godspeed, Mr. Robinson. We can only hope to be a fraction of the man you were.