As some of you may have guessed from my last article, I have a bit of a soft spot for puppets. I grew up with not just the obvious Muppets and Sesame Street, but also Eureeka’s Castle, Pee-wee’s Playhouse and even Mister Rogers. There is something about the ability to imbue felt and fur with a soul that gives me not only a love for the puppets but a profound respect for the people behind (or under) them.

I had the opportunity recently to visit the magical world of puppet design and fabrication known as Puppet Heap, a Hoboken-based build shop established in 2004. When I tell you it was something out of a childhood dream, that doesn’t even begin to describe the feeling. 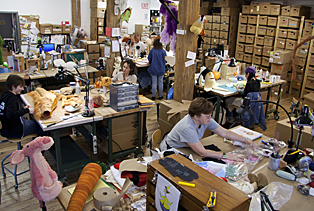 The moment I walked into the shop, I was met with the kind of magic one expects from such a place. The front room was decorated with a wall of design concepts and storyboard drawings, many of which I was familiar with. The abundance of toys, marionettes and hand puppets made for an atmosphere anyone would be hard-pressed to find uninspiring. I know it made me want to start sketching up crazy creatures and sewing dolls.

The diversity of the various in-progress projects was amazing. From dragons to cranes, hand puppet and marionettes, it seems there is nothing these builders can’t bring to life.

I learned about how much ingenuity has to be brought to the table on each project. Using equal parts art and science, the puppet builders must think on their feet to bring such a variety of characters to life. As I toured the workroom, I saw one builder creating a mechanism for a blinking eye. On his worktable were the pieces of a different puppet head, which he had taken apart to see how its eye was built. He said that they don’t often reverse-engineer mechanisms, and that this particular one wasn’t going to work. It seems that at times these builders have to reinvent the wheel, as each new creation represents a new challenge. I was surprised by the amount of creativity and technique that go into each one.

So how does one find himself as a puppet maker? I asked Puppet Heap founder Paul Andrejco.

“This is where I thought I was going when I was eight years old,” said Andrejco. With a father who was an engineer and a mother in the arts, Andrejco comes to the table with a wonderful blend of the whimsical and the practical. Andrejco was born the same year that Sesame Street debuted, and his inspiration does not stop at American puppetry. Highly inspired by folk art puppetry of Europe and Asia, his blend of different forms of simple hand puppets gives his work a signature look that I fell in love with immediately.

I was first introduced to the twisted world of Puppet Heap by the short, “Omar’s Mother.” I have been hooked ever since. Puppet Heap has recently taken on the childhood classics, “I Knew an Old Woman Who Swallowed a Fly” and “Old Mother Hubbard,” relocating both to Spudbottom – a town of bizarre creatures and familiar tales with Andrejco’s signature twist. 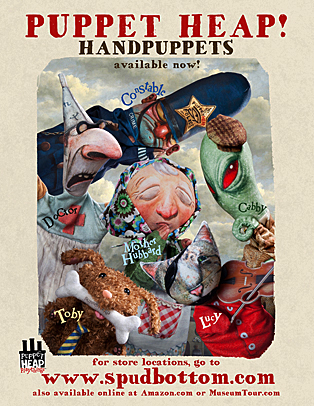 The design aesthetic in Spudbottom features a wonderful amalgamation of everything a puppet can be, while still maintaining a simple look. The character design is across the spectrum, but at the same time everything clearly fits into the same world. Characters from a scruffy little dog, to a goat swallowing an old woman to an alien cab driver help create this eccentric and eclectic town.

A particular favorite of mine seemed to have a bit of divine inspiration in its design. The character, Scratch, caught my eye because of his hollowed-out, eyeball-less head, the inside of which is painted Day-Glo green. When the puppet moves and the eye sockets flash green, the effect is quite dramatic. Andrejco explained that he was taking some newspaper out of the character’s hollow head when his desk lamp illuminated the inside of it. He liked the look so much that he kept it. I am glad he did!

To go along with the stories, Puppet Heap has released a series of hand puppets, known as the Puppet Heap Playthings. I was delighted when I was introduced to the line at last year’s Toy Fair. I fell in love instantly and was chomping at the bit to buy my own at New York Comic Con in October (I bought two!).

When I asked Andrejco about how he saw the Playthings fitting into Puppet Heap as a company, he said that he wants them to be central to what Puppet Heap is all about. “When I teach my classes and when I talk to people, I want to inspire them to play.”

I think he is succeeding in doing just that. This is a spectacular world that the folks at Puppet Heap have created, and I cannot wait to see what they roll out next.

Check out these characters and more at PuppetHeap.com, as well as many other characters and shorts on their YouTube channel. Puppet Heap Playthings are available on Amazon.com and other places where awesome and magic reign supreme!