The Dark Tower: The Way Station #1

I haven’t read a Dark Tower comic in a while. I religiously followed the series when it first returned with a retelling of Wizard and Glass. I even went to a midnight release of the comic. My excitement for something fresh from the world of Roland Deschain drew me to pay an exorbitant price for variant covers, convinced that the series was a gold mine. But as the series continued, the flame of my excitement waned. What I found, month after month, was a story that felt out of place in Roland’s world. Try as they might, Robin Furth and Peter David could not believably replicate Stephen King’s narrative voice. The story – of Roland’s return home, the first female gunslinger and the fall of Gilead – fell flat. The comics lacked the tension and suspense that abound in the novels. So when Marvel announced its plan to tell the entire Dark Tower series through comics, I knew I would avoid them. But something drew me to “The Way Station.” I remember the chapter vividly in The Gunslinger, so I thought, just maybe, it would meet or exceed my expectations. What this comic showed me, however, was that this series has not improved, and, in many ways, has gotten worse. 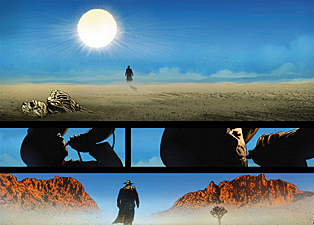 In the novel The Gunslinger, Roland arrives at the way station, a ramshackle house and barn in the middle of the desert, and there first encounters Jake Chambers, a young boy who died in a traffic accident in New York City but awoke in the desert. The comic, however, starts from a different point: Roland’s interaction with a man named Brown and his pet raven, Zoltan. From here, Furth and David take an alternate approach to the story. Roland leaves Brown and then, while thirsting in the desert, encounters first the spirit of his mother and then Cort – his instructor in Gilead. Much of the comic is taken up by Roland’s self-narration, an action that moves from irritating to infuriating by the end of the issue. On the final page, Roland encounters Jake for the first time. In the novel, he passes out from dehydration and wakes to find the boy kneeling over him expectantly, tending to him. Here, Jake watches Roland collapse and as he stands over him with a pitchfork in his hands says, “Wow. That’s messed up.”

Maybe I’m being too picky. But those of us who love certain geek things – Star Wars, videogames, cult classics like The Thing – get irate when we see our favorite properties messed up. This is how I feel about The Dark Tower. In King’s novels, Roland walks around with a quiet violence. He doesn’t talk unless he has something to say, and King continuously emphasizes Roland’s grace. In this comic, he fumbles around like a comic sidekick, and the narration of his actions takes away any sense of intimidation. He even cracks wise a few times.

If you’re read the novels, you know that in the beginning, Roland is completely humorless.

Also, King uses a lot of narration in the books. Roland rarely speaks, and when he does, it showcases his intelligence, cunning and experience. Why the writers decided to have Roland narrate baffles me. This kind of change completely alters the character. Additionally, they add a gun battle with some wild, irradiated dogs. The scene serves no purpose and does little to show how adept Roland is at protecting himself, as one of the dogs slips through and bites him. This is a guy who shot the blade off a pocket knife in The Drawing of the Three. To even believe that he could be bested by a pack of mutts is crazy.

From the narrative voice in the comic to Roland’s own narration to minor changes in plot, this issue fails to live up to the novel. You may ask, “Why should it?”

I answer with this: Han shot first.

You make a major change, you piss people off. I hope this comic finds the clearing at the end of the field because it’s not doing any good here. 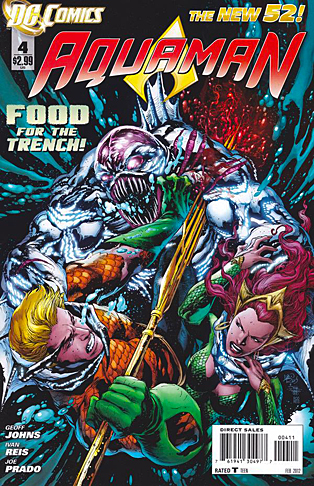 Unlike my cohort Ian Gonzales, I love Geoff Johns’ Aquaman series. I love that Johns is trying to resurrect the silver age heroes and make them relevant for today’s society. While Ian lamented Johns’ attempts at addressing Aquaman’s less desirable traits (like talking to fish), I’ve found this to be an endearing aspect of the author. Johns wants people to know that Aquaman is a cool character. The problem is that the conclusion of “The Trench” does a poor job of this. The arc ends abruptly and while it has a few cool moments, it’s a bit too Hallmarkesque to be taken seriously.

In the previous issues, Aquaman was trying to track down people who were attacked and kidnapped by a race of monstrous fish people. Arthur and his wife, Mera, track the alien race to the Marianas Trench, where they find a dying race desperately trying to feed its queen. In order to save the abducted people, Arthur creates a volcanic eruption at the bottom of the sea, then drops a land mass on the monsters as they try to escape. When the people are returned, some tow-headed boy runs over to Arthur and proclaims, “You’re my favorite superhero!” The issue ends with a police officer going to Aquaman and apologizing for dissing him. To make up for his rudeness, the officer gives Aquaman a dog who – get this – doesn’t know how to swim!

For a writer as good as Johns, this issue is a piece of crap. The pacing is terrible, the tone uneven, and the resolution so corny that it would embarrass the writers of Full House. On the one hand, Johns wants readers to feel sorry for the race. They’re dying off because of inbreeding, and all they’re trying to do is survive. On the other hand, he’s trying to showcase Arthur’s physical strength. So just when he seems to feel bad for the fish people, he pushes a massive rock outcropping onto them, assuring that they will meet a painful end. Also, for a race that showed such terror in the beginning, they look pretty feeble now. Aquaman literally swims into their throne room and tears off a chunk of wall that holds the captives. Then, he swims away. While a fight ensues, it’s resolved quickly, so that the suspense present in the earlier issues is almost nonexistent here. He had more difficulty ordering lunch in the first issue.

As with Johns’ other resurrections (Green Lantern and The Flash), Aquaman is leading to a big revelation: What happened to Atlantis? This seems to be the setup for this year’s story. We’ll probably have a Blackest Night or Flashpoint type of crossover event in the summer, so prepare yourselves for that. Hopefully, the series gets better from here. As an introductory arc, this effort fell short of Johns’ other introductory work. Both The Flash and Green Lantern benefited from their initial runs. Aquaman may not fare as well, especially if the audience doesn’t see the depth of character normally present in a Johns revival.

I have hope. Johns has proven that he can spin some great stories, so I see Aquaman as more of a hiccup than a trend.

Still, I’ve been wrong before. 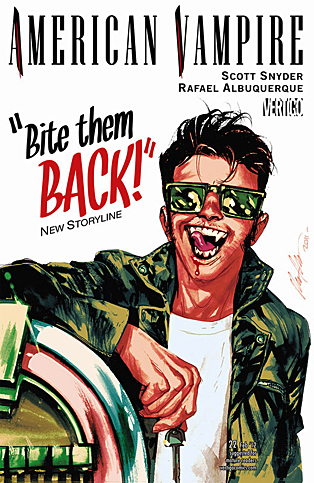 Bannen’s Book of the Week: I collect American Vampire, so nothing special drove me to have this issue in my pull list this week. But when I saw the cover, I knew I had to write about it. Scott Snyder has been moving the series forward in time, giving the vampires a different era to operate in during each new storyline. This one, “Bite Them Back,” takes place in 1954, the era of the greasers. In addition to crafting one of the best narrative voices in comics, Snyder pens a tale that has a few good twists, a great lead character and a fantastic climax.

“Bite Them Back” opens with the voice of Travis Kidd, a sunglass-and-leather-jacket-wearing speedster who enjoys drag racing. The initial images convey a dark tone as a group of scorpions attack a lizard, while the headlights of two cars bear down on them. Kidd informs us that young people cannot deal with death. He, on the other hand, deals with it on a daily basis. But not because he’s a racer. The story then kicks back to earlier that day when Travis and his girl, Piper, sit outside her parent’s house in his roadster, talking of running away together. When Piper’s father catches them, Travis asks to be invited inside to meet the family. The Francis family, however, has a dark secret and when Travis exposes it, the awesomeness that ensues is too good to spoil here. Afterward, we learn that Travis has been courted by the federal government for his special talent (Hint: It’s not racing cars). Through a quick distraction, he’s able to escape his federal tail, and then we’re brought back to the present.

The final page of the issue offers readers a shocking end to what looks to be a great series.

Rafael Albuquerque’s art is as good as ever, especially in the action scenes of the issue. Much like Terry Moore, Albuquerque conveys human emotions perfectly, utilizing a variety of facial features and minute tics that create the perfect response to the situation. Comics ask a lot from readers, both in digesting the visuals and inferring from the spaces between the panels. When you have great art like this, that action becomes much easier, and the comic is much more enjoyable.

Similarly, Scott Snyder presents Travis Kidd’s voice perfectly. I could sense the confidence of the character, the smugness of his demeanor and the ease of his delivery. Travis is a cool customer, and Snyder makes that evident from the first page. This is even more impressive, considering that Kidd doesn’t appear until the second page. Before you even see him, you already know the kind of person he is. This kind of talent is rare in writers.

Snyder, once again, proves why he is the next big thing in comics. If you’ve gone away from American Vampire, now is a great time to come back. It’s a fresh series that only requires you to know that vampires exist. Everything is taken care of.

Much like an actual drag race, this comic moves along at a crazy pace. But it’s fun to read and fun to look at. So hop in, Daddy-O. The death race has begun!