When you think of role-playing games, the image that most likely comes to mind is a group of players sitting around a table, talking, laughing and rolling dice. This is certainly how it’s worked out for me whenever I’ve clustered around a basement or kitchen table with my pals. There is something inherently magical about co-creating a world with the people who are breathing the same air as you. 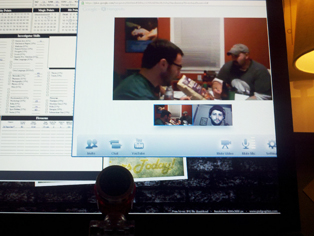 Now, what if one of those people, those all-important pieces of the game, moves away? Let’s say one of your most valuable and ardent RPGers moves to Rhode Island! I suppose you and your buddies can still bundle into a car and shoot over there if you’ve got RPG visitation rights. You can even make a weekend out of it. Eventually, though, you’re going to have to go back to a world where the only person who would Dungeon Master a game of Call of Cthulhu in earnest now lives in Providence, Rhode Island (which is oddly poetic).

In my quest for almost constant RPGing, I’ve been experimenting with replicating the tabletop experience using current technology. I’m certainly not the first person to try this, but I’ve found a pretty good replacement for the old kitchen table.

Before I go into how we did it, let’s go through the most important aspects of playing an RPG. What components do you need to run a game successfully? First and foremost, you need other people. You then need a way to converse with these people; otherwise, you may as well go and grind out some experience points in World of Warcraft.

There are a few excellent ways to replicate the face-to-faceness of the tabletop. The two easiest and most robust ways are Skype and Google+ Hangouts. There are plenty of Internet Voice over IP services out there that allow you to talk to as many people as you’d like, but Skype and Google+ Hangouts offer a visual component that is essential for true role-playing. Skype is a good option, but I prefer Hangouts. Both are free services that will probably work equally well on low-end and high-end machines.

Google+ Hangouts seems to be geared more toward having a group discussion. One of its fun features is the display of all the video streams tiered across the bottom of the page, with one feed dominant above the rest. The dominant feed is the person who is talking at any given moment, so the camera stream swaps with each person who speaks. Wouldn’t it be great to have something like this in your real tabletop games? This way your players would have to pay attention to you.

Okay, so we’ve got our face-to-face. Now, how do we make sure we’re all seeing the same map, handout or artwork? This leads us down an even deeper rabbit hole. The easiest solution is to just go old school and leave everything up to the player’s imagination, but there are some game systems that rely on a visual component, either based on the mechanics of the game or just for flavor.

The hard part now is choosing which virtual tabletop you want to use for your game. Many options exist, and some might suit your game better than others – so choose wisely. Here’s an excellent list from RPG Virtual Tabletop that runs through the basics of each.

We went with Fantasy Grounds for our game, which was Call of Cthulhu with the modern day Delta Green expansion. 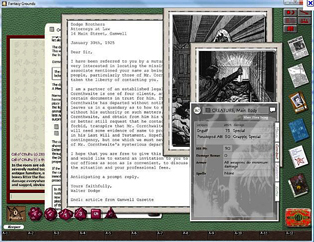 Fantasy Grounds is a robust program that offers pretty much everything I was looking for; it had the Call of Cthulhu ruleset available, which allowed me to input non-player characters and roll for them with just a click of the mouse. I was able to type notes right into the program and link text that I could drag and drop if need be – sharing handouts was as easy as dropping a file into a folder. The learning curve for the actual program is pretty steep, and I recommend that if anyone is toying with the idea of purchasing FG, download the trial first and play around with it for a few hours. It’s not something you can just jump into and know how to use.

FG can also get pretty expensive, and everyone who plays will need a version of the program. Some versions are cheaper than others, but only one person (the DM) needs the full package. SmiteWorks – the creators of the program – offers discount packages, so if your entire group chips in, you can make it as about as cost effective as purchasing rulebooks for a new game system. Of course, it is entirely possible to play without paying a dollar, and there’s an entire Internet out there with solutions if you’re willing to hunt around a little.

Our virtual game went really well. The players stayed engaged and they all got to play from the comfort of their own homes. A few of them even remarked about how it felt a lot like playing around the table, especially with Hangouts’ video chat function. As I said before, I’m not the first person who has tried this, and in fact there is a growing collective of people who make this a regular part of their gaming schedule. The result is ConstantCon, and they offer weekly games for play over the Internet. All you need is Google+ Hangouts to join.

If you’ve got any good online tabletop tips or ideas, sound off in the comments!

Who Would Win in a Fight? – Ultimate Marvel vs. Capcom 3 Reviewed