Hey America! Are you still watching American Horror Story? Well, of course you are! It’s not the greatest, but it is our national horror story, and you are good countrymen. I’d love to recommend a better serialized drama you could be watching at 10 p.m. on Wednesday nights, but I don’t know of one. So have at it, you patriotic goons.

What they say is true: American Horror Story is indeed a very problematic show. The writing is crappy, the drama is pitched way over the top, the characters are hard to care about and the better part of many an episode is dedicated to watching a married couple argue, which is quite possibly one of the least fun things to watch (but then, there seem to be very few television dramas that have figured this out).

Right. American Horror Story bears no relation to modern horror films that reach for cheap scares and juvenile gross-outs. It is a mannered, classy brand of psychological horror that features a dead psychopath in a fetish suit raping his girlfriend’s mom and a creature made of aborted fetuses sewn together. 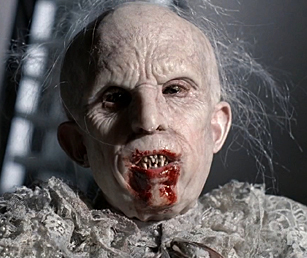 An awful lot of the things that are supposed to be scary on American Horror Story just wind up being goofy, such as the aforementioned mad doctor and his Frankenbaby (which is apparently called the “Infantata”, though I don’t think I’ve ever heard anyone on the show utter that word), or that thing in the attic that resembles Sloth from The Goonies.

I must admit that there have been a few scares so far, or at least a few shocks, though the show fails to deliver the sort of eerie atmosphere you’d normally expect from a narrative about a haunted house, because the ghosts aren’t scary. They don’t appear like wisps of smoke in your peripheral vision or float through darkened rooms wailing mournfully – they just hang out and shoot the shit like regular people.

American Horror Story boasts the rosiest portrayal of the afterlife I’ve seen since Defending Your Life – in the American Horror Storyverse, dying apparently does very little to cramp your style! You can still interact with the living in many meaningful ways that include calling their cell phones, beating them up and having sex with them. The show even seems to imply that the dead can impregnate the living! This has to be a first in the history of fictional afterlives, right?

Most of the spirits in the house just seem like regular people, or what passes for a regular person in the show’s sick, sad world. Some of them still bear the wounds that killed them, but some don’t. While some are acutely aware of and bitter about their deaths, some wander around like Bruce Willis in The Sixth Sense, not knowing that they died. Some of the ghosts seem to be stuck in the house, and it’s implied that this is because their bodies were interred on the property. However, we do see some of them out and about, even during the daytime! This flies in the decomposing face of all haunted house convention.

I assume that a lot of this will be explained in some future infodump, but I doubt that there will ever come a time when the characters on American Horror Story will seem realistic or their motivations plausible. At times I don’t really feel like I’m watching an hour-long drama so much as a bunch of random scenes featuring nutty people doing nutty things. You could drop a cinder block on my head halfway through watching an episode and I would probably have a head trauma dream that would make about as much sense as whatever actually happens in the rest of the show. That guy with a half-burned face runs up and clobbers Ben’s obsessive mistress with a shovel for no apparent reason and Ben builds an impromptu gazebo on top of her! The maid gives Vivien a brain to eat – and she does! One of Ben’s patients confronts his fear of a Bloody Mary-inspired urban legend by standing in his bathroom and trying to summon the “Piggy Man,” and a burglar jumps out of his shower and shoots him! And this is to say nothing of that crying and masturbating scene. 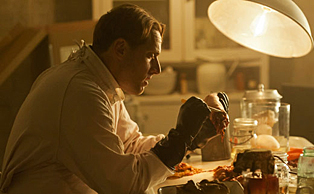 The total lack of verisimilitude definitely makes it difficult to feel very scared while watching American Horror Story, but in a way it is sort of thrilling, because it helps keep the show from being predictable. Sure, you can see individual beats coming, but American Horror Story is so nutty that I suppose anything could happen (I mean, anything that doesn’t involve nuanced, character-driven drama).

And the show does have some good elements, or at least some entertaining elements. The Jessica Lange character is amusingly awful! The appropriation of the Black Dahlia murder was fun! And though it hewed a little too close to the actual events of Columbine for my liking (the “Do you believe in God?” taunt was a bit on the nose), the school shooting scene was effectively suspenseful, and it lent some much-needed mystique to Tate the “troubled teen.” Also, I must admit, having Violet die and wind up stuck in the house for all eternity is a pretty compelling reason to keep the Harmons from moving (at least, it’s more compelling than just saddling them with an incompetent real estate agent).

Well, suffice it to say, I’ll probably keep watching this show to see what happens next. Maybe it will blossom into a great television drama like Mad Men or Breaking Bad, and maybe pigs with bat wings will fly out of Ben Harmon’s butt. I’m serious about that latter part of that sentence. It really could happen.