After things were over and we all went our separate ways, I sent my players an email with a few questions, just to round out their experience and see what they got from it. Here are some of those Q&As:

TTW: What was your impression of role-playing before actually playing? What about after?

Liz: Prior to Saturday, I had always felt I would never play such a thing, and that the sorts of people who do are weird and probably wore sweatpants to middle school. Now, I have seen the light! Or at least, I would welcome the idea of playing again.

Rachel: Nerdy, but probably fun. Fun, but more work than I expected.

In this busy world of adulthood, we don’t pamper our imaginations as much as we should

Nick: The game pretty much confirmed my impression of role-playing – though I did see far more opportunity for joking around than I’d expected. I guess I had it in my mind that only super-witty comedian types could make playing the game feel so funny, and that a Dungeon Master would set the tone and that tone would necessarily be rather serious, but the open form of the game really lends itself to players adding their own tones.

Justin: It was about what I thought it would be. If anything, I thought it would take the group a while to let go of irony and start playing in earnest, or that maybe we wouldn’t manage to at all. But I think we did a pretty good job of getting our heads in the game and keeping them there.

TTW: Was there something about the game that was surprising to you, something you didn’t expect, for better or worse?

Liz: I was surprised at how much of a world had to be created in order to play the actual game – names, towns, maps, letters, so on and so forth. I was also surprised that the battle scene was where I got bored.

Rachel: It’s not nerdy because it’s fantasy. It’s nerdy because it’s so much checking your five pages of stats and multiplying them by whatever and comparing to that other thing. It’s less like videogames and more like income taxes.

Nick: I was surprised how difficult it was to grasp even the most (apparently) basic abilities and how they worked.

Justin: I was impressed by how much goes into preparing for the game and then executing it. When you buy a videogame, you just turn it on and there it is, but you as the DM had to do an enormous amount of prep work: story, logistics, maps, props, developing the bad guys. Then during the game itself you had to basically play God – answer every question, keep a fluid and coherent story going based on our unpredictable and sometimes illogical or halting choices. It was an incredibly dynamic process – a kind of collaborative hallucination led by one guy basically doing a potentially endless improv.

Andrea: I was surprised at how much freedom we had to make decisions. Like when we went to the bar and Amanda offered to buy drinks for everyone. I was like, “You can’t do that!” But then you let her do it. That was really cool. 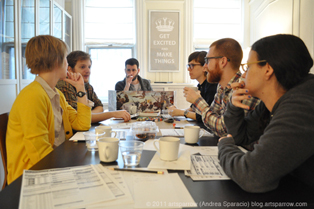 Liz: The best part was imagining us all in-character. I saw it sort of like a Saturday morning cartoon about adventurers, narrated by the folks sitting around the table. Least favorite, again, was waiting on everyone to decide what battle weapon and move they were going to use. I have a short attention span.

Rachel: The storytelling and when we got into the imaginationy parts, like when Justin asked for a shrine to his God. Who even gets to play pretend anymore after they’re 12? I wish we’d done more playing pretend.

Nick: Favorite part: When I realized we were on the right track, and when I recognized the beauty of a system that lets the DM lure the players toward the intended story.

Not least favorite but weirdest: That awkward moment when we had to figure out how straight we’d do the role-play. Especially when we were left to our own – it felt like carrying on a meeting without the boss, or doing a class project without the teacher.
Actually, least favorite: Finding out I didn’t need to spend so much time picking abilities, or alternately wishing I’d spent more time, and in the end wishing there was a recommended first-time pack.

Justin: I didn’t mind the stats and sheets as much as I thought I would. Once I got comfortable with the material it got pretty easy, but I know I would never become an expert in the way you’d need to be to for serious playing. I, of course, want to be able to do some cool shit and do progressively cooler shit as I get more powerful, but I’m not interested in simulating expertise in an imaginary subject in a virtual world; that’s not the experience that I came to the game looking to have.

Liz: I would like to have more role-playing happen and less trying to kill that one guy. It’d have been neat to see what the rest of that world looked like.

Nick: If I did a one-shot again, I’d prep the character ahead of time. Also, a one-shot for noobs apparently needs a quicker story and less combat. As a player, I’d pick something simple. I always want to pick the most complicated thing, but I think I’d actually be quite happy as a big lumbering club-swinger. 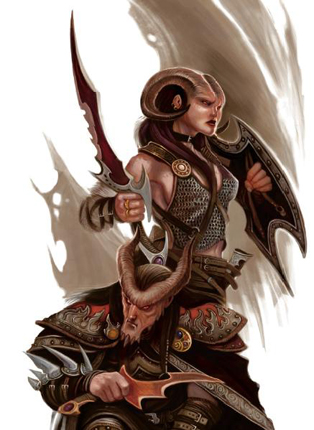 Justin: For less experienced players, it can be jarring to be told first that you can do whatever you want. I think that new players could use a more gradual introduction to the idea of open-world gaming and open-ended role-playing. Something like a training mode or even a foundational mini-quest, wherein your options are relatively constrained while you acquaint yourself with the dynamics of the game world and the playing.

And there it is! Almost unanimously, the players enjoyed the actual story/role-play parts of the game and disliked the combat. I’m sure if I asked them before we played what parts they were most looking forward to, it would be the reverse. As Rachel said, the game isn’t nerdy because of the subject matter – I can’t tell you how many people I see during my morning commute reading Game of Thrones books – it’s nerdy because you actually need to memorize rules to play the game.

I think we all learned something from this experience. Some learned that they could actually like and play and be good at role-playing games, others remembered how much fun it used to be to make up stories and “play” with your friends. I learned that sometimes taking shortcuts can hinder the overall experience, and that I should have worked on streamlining combat for the newbies instead of writing a 13-page backstory for the world they were adventuring in.

Despite the hiccups, I would definitely DM for newbies again, and I feel like I’m a bit more equipped to handle another virgin sacrifice.

Here’s the takeaway for this, I think, and it’s something I’ve written about in the past and it’s the reason I love RPGs so much: In this busy world of adulthood, we don’t pamper our imaginations as much as we should. When we do “play,” we do it in a competitive manner, one that is generally dictated by outside force – board games and videogames. We need to make more time to play with one another, to work together and have a laugh while doing it.

I don’t mean to get super heavy about this all, but playing a game where you’re working within society to complete goals versus one that ends with winners and losers can only be a good thing. This is the essence of role-playing games for me, and I’m going to keep trying to teach that to anyone who is willing to learn.

I wonder how many of you out there remember your first RPG experience? I’d be interested to hear what got you started and what got you hooked. Let me know in the comments.