What a crappy comic! Loaded with clichés and convenient escapes, Detective Comics #4 does little to build suspense, weakly develops its characters and falls far, far short of the bar Scott Snyder sets in his own Batman series. It’s a shame to see that of the three Bat-titles, only one offers readers anything of substance. This comic is garbage.

When Tony Daniel started his work on Detective, I counted myself as one of the few people interested in the Dollmaker storyline. I loved the creepiness of having a villain who cuts off people’s faces and wears them. Even years after Hannibal Lecter did it in Silence of the Lambs, the moment still creates honest chills. But since then, the series has failed to create a lasting impression, nor offer anything interesting to Batman fans. I think comparing Tony Daniel to Scott Snyder doesn’t seem fair. But aren’t artists usually measured against their contemporaries? 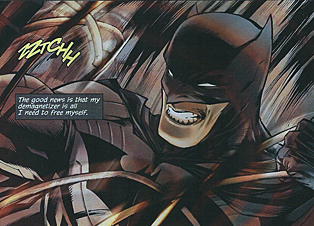 The issue opens with Batman holding some thug’s head in a toilet (we find out the thug works as a police informant). The poor bastard claims he’s drowning but Batman smartly quips, “That’s not drowning. That’s called getting your hair wet!”
What? moment #1

Remember at the end of Speed, when Keanu Reeves defeats Dennis Hopper’s character and says something stupid like, “Yeah? Well, I’m taller.” Talk about bad one-liners. This issue is full of them.

Add that to the time of the issue, which exactly tells readers the events occurred “seventy-two minutes ago.” The relevance of this time frame never appears. Instead, one page later, readers are thrown forward to present time as Harvey Bullock discusses Batman’s supposed crime: murdering a police officer. Then, Batman is shown strung up by a series of puppet wires while he fights Joker impostors strung up on their own puppet wires. Here, we learn that the Jokers are “wild and desperate,” to which Batman thinks, “So am I.”
What? moment #2

Then the informant comes calling for Batman’s body, because his secret client “waddles to the beat of a different drummer.” Why would you sell out your boss that quickly? It’s not even difficult to decipher. The Riddler would be sick with the lack of effort.
What? moment #3

Batman, entangled in the wires, is suddenly further ensnared by more of them. Don’t worry, though. They’re made by Wayne Enterprises. And guess who has a secret override button built into his utility belt?
What? moment #4

I’m not going any further into reviewing this comic as I’m starting to sweat with rage. The finale of the issue shows the car the Dollmaker escapes in explode, but the bodies are not real – they’re plastic.
What? moment #5

And I spent money on this?

Save yourself the trouble. Detective Comics ain’t worth it. 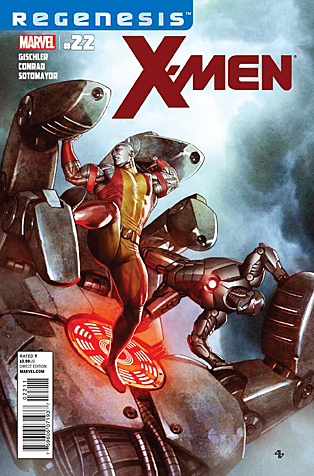 Gischler delivers another solid outing with the latest issue of X-Men. Springing from the “Regenesis” storyline where Wolverine and Cyclops have created their own X-Teams, X-Men #22 follows a Storm-led group which has discovered an army of Sentinels that are being prepped for an invasion on Symkaria because of one politician’s motivation for revenge. Gischler scripts a tight story that moves quickly, all while focusing on a woman whose thirst for vengeance may mean the beginning of World War III.

In the previous issue, War Machine was captured by a Sentinel. This issue picks up exactly with that moment. While the X-Men battle the robot, Psylocke attempts to find Domino, who has gone missing after being attacked by one of the Sentinels.

Next, we’re taken into the war room of Puternisctan’s Madame Governor as she watches the chaos, urging her scientists to aid in her plan. One man seems unsure, and I’m sure his conscience will play a vital role in the end of the story. While Storm, Cyclops and War Machine take down a Sentinel, Psylocke, Warpath and Jubilee meet up with Domino in a warehouse stoked with Sentinels. When they start taking off, Jubilee jumps on the back of one and blows it up while Storm closes out the issue amidst the beginnings of a very powerful meteorological disturbance.

Gischler does a great job of bouncing between Storm’s crew, Psylocke’s group and the crazy governor. Not a moment of the issue feels wasted, and the story clips along at a very quick pace. The main baddie, Puternisctan’s governor, feels a lot like a Bond villain, and her unquenchable anger can come off as silly (I’m just glad she doesn’t sit in a high-backed swivel chair and stroke a cat). But the complaint is a minor one, as the rest of the comic more than makes up for this.

Will Conrad and Steve Kurth have done a phenomenal job depicting the action as the series has been very lively. Only six pages feel still; the rest of the issue is packed with action panels, destruction and the X-Men kicking ass. Props to Conrad and Jay Leisten, who give the visuals a sleek, colorful look that captures the individual tone of the different settings.

I also want to applaud Adi Grandov for his phenomenal cover art. The cover of this issue is what initially sold me, and I went back and purchased issues 20 and 21 in order to have all parts of the arc. So far, I haven’t been disappointed.

I may be weak in my X-Men knowledge, but Gischler gives enough background – peppered in randomly throughout the issue – to make readers aware of what’s going on in the X-Universe. Even not having a background in the X-World wouldn’t make this a difficult read, and the X-Crew at Marvel should be praised for their continuously impressive work.

If only the crew over at Batman could be as skilled. 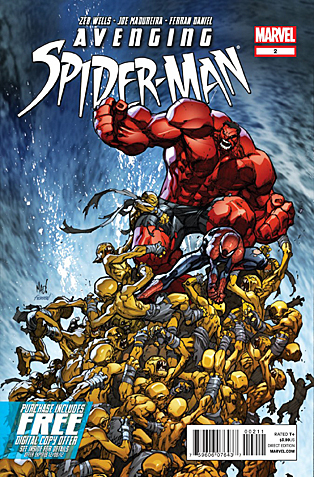 Bannen’s Book of the Week: Zeb Wells offers up another stellar issue of the new Avenging Spider-Man. Parts of this issue read like a vaudeville show, and Wells doesn’t back off the humor. Spider-Man’s banter with Red Hulk is clever and fun, and Joe Mad’s artwork hits the humorous beats just right. So far I’m loving this series, and I can’t wait to read about more Spidey team-ups.

Picking up where the previous issue left off, Spider-Man and Red Hulk escape the giant worm that swallowed them. They go on to learn that the race of orcs that have enslaved the mole people are eradicating them like the Nazis tried to do during World War II. The ethical dimension works well to add some depth to the story and create a moral conflict for both Spider-Man and Red Hulk. It turns out that the reason the moles attacked New York was to find a successor to challenge the orc leader – a massive, olive-colored monster named Ra’Ktar. After J. Jonah Jameson inadvertently agrees to challenge the beast, Red Hulk comes in and attempts to beat the monster to a pulp. The end of the issue is surprising and violent and has enough of a cliffhanger to have readers lined up to find out the finale.

J. Jonah Jameson practically steals the show as New York’s big-mouthed mayor who tells Ra’Ktar, “We may be underground, but this is American underground. You got something to say to J. Jonah Jameson, you do it in English!” This, of course, means that he has to challenge the leader, but before he can fully don his suit of arms, General Ross steps in to try to best the champion.

Once again, Joe Madureira’s art makes for an attractive visual experience (and his Red Hulk is pretty brutal looking). Ferran Daniel adds great tones to the panels, as much of the background is repetitive (it takes place underground). In one scene in particular, Spidey and Hulk argue the merits of saving the race of Moloids from extinction, and Daniel adds beautiful lighting (created by the burning bodies of dead Moloids) to really catch the intensity of the debate.

Issue #2 is just as strong as #1, and where the first one as driven by plot, this feels more driven by emotion. It’s a violent and desperate story, strong in its purpose, and beautifully executed in its visuals. I urge you to be on board with Avenging Spider-Man. It’s the Spidey team-up series you’ve been hoping for and more.

Dungeon Master Sacrifices Virgins in the Name of Role-Playing, Part 2