SPOILER ALERT! If you haven’t seen the midseason finale of The Walking Dead, don’t read any further. You were warned!

Sweet little Sophia (Madison Lintz) isn’t alive and hiding in the woods waiting for her rescue, after all. Instead (as we found at the end of last night’s The Walking Dead midseason finale), she emerges from Hershel’s barn as a zombie – at least until Rick (Andrew Grimes) fires a bullet into her rotting head to put her out of her misery. 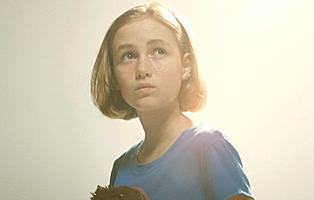 The ending proved an even bigger shocker for fans of the comic book that the hit AMC show is supposedly based on, in which (milder spoiler alert) Sophia is one of the few original characters who is still alive, albeit as a fairly bit player in the scheme of the series.

The Walking Dead creator Robert Kirkman has shown in the comic book (and now apparently in the television series, where he works in the writers’ room), that he has no problem with harming children to advance the plot. But Sunday’s ending proved harder for me to deal with as a parent than anything that’s gone down in the black-and-white panels of the book.

And I’m not alone. Even producer Gale Anne Hurd, who likely had to sign off on Sophia’s death and Carl’s shooting on the series, winces at the material.

“The thing that’s scariest to me [on the show] is when Carl’s been injured,” she told Unwinnable earlier this year. “Still, [it’s hard] watching him and you wonder if he’s going to survive or not.”

What makes it easier for her, she adds, is working directly with the young actors offscreen. “Both Madison Lintz, who plays Sophia, and Chandler Riggs, who plays Carl, are actors. They understand that they’re in a fictional work.

“The cast really rallies around Madison and Chandler – takes a very maternal or paternal interest in making the set environment one in which they feel very, very safe,” says Hurd. “When we have lunch – regardless if it’s the middle of the day or the middle of the night, we still call it lunch – we’re all sitting there in the lunchbox with the actors and the actresses who are playing zombies. It’s not as traumatizing as you’d think.”

Riggs, in fact, had a blast getting blasted in his first full stunt – being yanked with a cable pulled by stuntmen to mimic a shotgun blast – which was filmed on his birthday.

Still, it’s more or less a taboo to kill a kid onscreen in Hollywood, unless it’s one of those tearjerkers about parents dealing with the loss of their children (Exhibit A: The Ice Storm).

Of course, once they get to be teenagers, they’re fair game to be hacked up by whatever masked serial killer comes along at the camp where they’re counseling. (F— those young punks, with their premarital sex and drugs and loud rock music!) 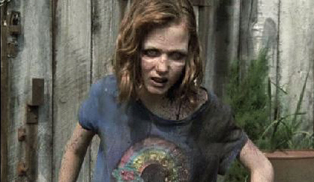 The trick to putting a young child in danger onscreen is to never let them get so scared that they can’t face up to their fears, says Guillermo del Toro, who knows a thing about placing kids in peril.

“That’s completely deliberate that the highest effective killing score is Sally,” he says of the young hero of Don’t Be Afraid of the Dark. “She’s not a languishing wallflower. She’s not a victim.

“If I pitched Home Alone, it’s about a kid who’s alone in his house and burglars are breaking in. You go, ‘Holy crap, it’s horrible.’ But it’s the extreme example I can use. But it’s about resourcefulness. She never, ever gives up. She never lets them terrorize her. Even in the bathtub scene, where she’s very defenseless, she still whacks one of them and takes the razor blade. She’s a regular 11-year-old Rambo.”

The same can’t be said of Sophia’s demise on The Walking Dead. She dies alone, scared, painfully, with the last face she sees belonging to some decomposing zombie that bites her. Off camera, true, but not outside of fans’ horrified imaginations.

Shocking, yes. We learn again that no one is safe in this post-apocalyptic world.

Necessary? Here’s one viewer who doesn’t think so.

The Dead Are Walking Again