There is no escape from the zombie infestation on The Walking Dead – executive producer Gale Anne Hurd even finds them shuffling along on line at craft services.

“When we have lunch – regardless if it’s the middle of the day or the middle of the night, we still call it lunch – we’re all sitting there in the lunchbox with the actors and the actresses who are playing zombies,” says Hurd. “It’s not as traumatizing as you’d think.”

Actor Jon Bernthal, though, is traumatized. The actor who plays Shane, the emotionally conflicted deputy who covets his best friend’s, and partner’s, wife, has had it up to his eyeballs – including the one with the cornea that got punctured in three places filming a scene during the first season – with the undead.

“Call me a jerky method actor, but I hate zombies with all my heart,” says Bernthal. “I’ve been looking for them and chased them, hunted them or killed them for so long. When we go to Comic Con and there’s some shuffling zombie coming up to me, I always tell them, ‘Get away from me.’”

But as Bernthal and the rest of the cast and crew head to New York Comic Con to bask in the adoration of fans pancaked in bloody makeup this Saturday, there are bigger things to worry about than just the zombie apocalypse.

Season Two of the hit AMC show – which debuts Sunday at 10 p.m. – has ratcheted up the stakes on and off camera.

The biggest scare, of course, is the sudden departure of showrunner Frank Darabont, who was severed from his post by the network with the suddenness of a butcher’s cleaver and with no real public explanation. 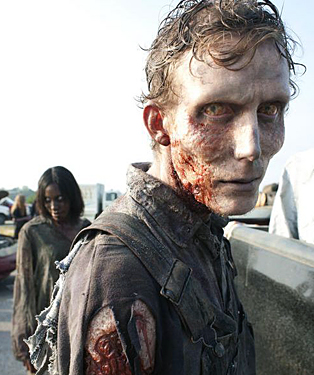 To horror fans, Darabont wasn’t just a faceless producer – he gave the show the same production value as his feature films, like Shawshank Redemption and The Mist. Darabont and Hurd were the ones who brought Robert Kirkman’s comic book to the network in the first place.

“It really is like [being a kid in] a divorce – you can’t be angry at mom or dad,” says Kirkman. “Fortunately, I have a really good relationship with both Frank and AMC. We were lucky to have Glen Mazzara [who was later elevated to replace Darabont] in the number two position from the very get-go of the second season and he has such vast television experience, having worked on The Shield and having been the showrunner on Crash. He’s very good at managing problems. I think that viewers who are watching the show will not see any transition during the season.”

It was a little tougher of a transition for Bernthal.

“Frank getting fired for me was a very huge blow,” he says. “It was an unbelievable honor to work for him.”

“We all came to a consensus very quickly to honor the story, and we needed to keep marching forward. Everything we’ve done between action and cut has been tremendous.”

Comic book fans have other concerns, like how Hollywood success is going to change Kirkman. And now that he’s officially lodged in the show’s writers’ room, if it’s going to mean that The Walking Dead and Invincible comic books are going to be a distant second on his priority list to hobnobbing with Tinseltown power players.

“I’m very metropolitan and fancy,” he tells Unwinnable. “I can’t imagine abandoning comics for TV; to me that would be selling out,” he says.

Once Sunday rolls around, though, we can finally focus on the drama in front of the cameras on The Walking Dead.

Hurd promises a 13-episode season full of storylines that will please longtime readers of the comic book as well as complete newbies. Rick Grimes’ (Andrew Lincoln) band of survivors will stumble on Hershel’s farm – and a love interest for Glenn (Steven Yeun). There are hints dropped that this year may bring a sighting of fan favorite Michonne, but it’s easier to get an answer from the zombies on the subject than the producers.

One thing fans can count on is a higher concentration of makeup artist Greg Nicotero’s flesh-eating creations in Season Two, right from the opening minutes of the premiere. Bernthal better get ready for some more method acting; Hurd better plan extra time for the craft services line.

“To me, there’s no substitute for having the monster on set, interacting with the human cast,” says Hurd. “And I think actors agree: Playing opposite a tennis ball on a stick is not the same as an actual performance on the day from an actor playing the zombie.”