With this issue comes the end of the “Spider-Island” story line. Much like a parent talking to a kid who injured himself goofing off, I’m left asking, “What did you learn?” From the beginning of “Spider-Island” it was evident that Peter was going to get his spider-sense back. But was it worth all the hullaballoo? Not really.

This is more like an end cap issue: loose ends tied up, new threads revealed, a lot of naked heroes. The beginning is fun in the usual Slott sense of the word. The banter between characters is lighthearted, humorous and more fun to read than the rest of the issue, which immediately falls apart. Before the end of the fourth page, new drama is already revealed and much of the issue is dedicated to what the future holds for Peter Parker. A little more than twenty-five issues from #700, this feels like a run up to the finish line, and not enough time is spent letting the dust settle before a new conflict arises.

Also (and this is the part that irks me), readers are given a blatant introduction to a new Spider book. Spin-offs are one thing if they feel organic. This, however, feels forced. Slott hammers readers with the knowledge that one of Spider-Man’s clones (yes, they’re back – again) is going to be roaming America with a new identity and a new Spider costume. But the conversation is too “wink-wink, nudge-nudge” to have any real impact. Additionally, there’s a weak attempt at encapsulating the way New Yorkers feel about Spidey now that they’ve had his powers (presented through an artificial conversation between him and a union worker). The scene doesn’t have the emotional impact I think Slott’s going for.

Much of the issue feels this way. It’s meant to show that there can only be one Spider-Man, but it feels like too much of a throwaway story rather than a deep reflection on the events of “Spider-Island.” I think a bit more introspection is needed to really articulate the newfound respect people have for Spider-Man. One issue doesn’t really do this justice.

In the end, “Spider-Island” was not the clone saga of this generation. It wasn’t a great series, but it wasn’t terrible either. I think giving it time to settle, then going back to it, might make me appreciate it more. But when things become “events,” they really take away from the initial intention. Instead, they feel more like cooked-up marketing schemes than serious character meditation.

I’m glad “Spider-Island” is over, because Slott is a much better writer with short arcs. His previous work on Spider-Man is stellar, and I’m happy to see that many of the character changes/updates he made are going to be making their way back into the regular mythos. Back to basics, friends.

Let us not go to Spider-Island; ‘tis a silly place. 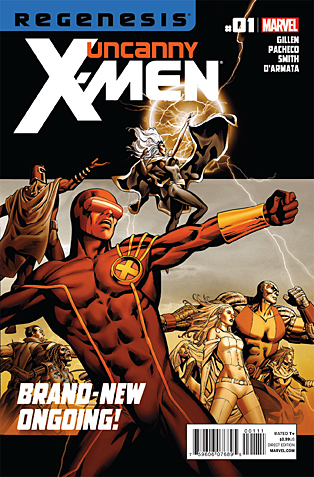 Rediscovering the X-Men has been a wonderful experience. Chris Yost and Victor Gischler started me on my journey, and I was lucky enough to see the beginning and end of Schism. Uncanny X-Men: Regenesis is the continuation of that split and the beginning of a new direction for half of the X-Men. Much of Uncanny X-Men #1 reads like a political thriller, which is probably why I like it so much. Kieron Gillen does a fine job of setting up the next stage of the X-Men story – this time with the introduction of an old thorn in the X-Men’s side: Mister Sinister.

I have to admit that I know very little of Mister Sinister. From what I’ve read about him, he seems more like a mischievous villain who has a set of undefined and unlimited powers. Much like Doom, Mister Sinister is egocentric and a master tactician. So while the final page of the issue made me laugh out loud, I’m sure it will have larger ramifications in the X-Universe.

To get to the point, Gillen introduces Sinister as the villain immediately when he kills two tourists with a glowing sword. Next, readers are given a few pages of political introduction where Scott outlines the new purposes of his X-Group. I loved this part of the issue. For newer readers, it reintroduced characters as well as divulged changes in others (Colossus is bonded with the Juggernaut avatar?).

The issue is not devoid of action, as half of the story features Cyclops’ X-Men battling things known as battle-bots. Pacheco does a phenomenal job of illustrating the chaos that ensues (including Emma Frost losing one of her limbs). Like almost all X-Men comics, this one is beautifully colored and visually engaging. Cam Smith‘s inks are amazing and Frank D’Armata creates some impressively vivid imagery through his coloring work.

Maybe because much of the X-Verse is new to me, I’m enjoying most X-Comics I read. If the luster has worn off for you hardcore fans out there, I hope you can at least appreciate this newbie’s take on some very old heroes. This may be Marvel’s attempt to reinvent the X-Men the way DC has reinvented its hero lineup, or this may be the natural progression of things over at the X-Men headquarters. Either way, this was another issue of X-Men that I thoroughly enjoyed.

Now we have to wait and see what’s happening with the other team in Wolverine and the X-Men. The competition is on! 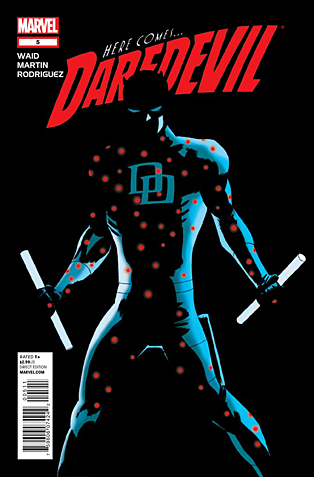 Bannen’s Book of the Week: I’ve tried to start this review several times, and I still feel it will come far short of explaining just how wonderful a comic Daredevil is. From Marcos Martin’s simple, yet effective art styling, to Mark Waid’s subtle, yet brilliant revitalization/reintroduction of the comic world’s favorite blind superhero, Daredevil is a comic every comic fan should have on his or her pull list. I want to reminisce a bit as I review, so with your permission, I’m going to digress a bit…

My first introduction to Daredevil was through my cousin Tim. He explained how Daredevil was blind, yet had the ability to use an internal radar to “see.” Because of his lack of sight, he coped with his other skills, namely his ability to hear well, to sense things through changes in wind and pressure, and his acrobatic prowess. And he used canes. This was too much. A blind superhero who used canes to fight people? There is no way this was an interesting character.

I remember when DD went through another revitalization phase, namely his costume redesign at the hands of D.G. Chichester and Scott McDaniel. This new armored version of Daredevil was more appealing because of its dark colors, but the character still didn’t matter (and other, more iconic characters were changing their costumes as well – Batman wore darker threads, and Superman turned into an electric blue dude).

So it was with this kind of mindset I picked up Daredevil #1 by Mark Waid. I’m a Mark Waid fan. I loved Alpha, and Waid’s writing on Amazing Spider-Man includes some of my favorite Spidey stories to date. I had no idea how much fun reading a Daredevil comic was going to be. Now, I can’t imagine anyone who wouldn’t find this a compelling, detailed read that hearkens back to a more lighthearted character who still seems pretty badass. I am a Daredevil convert. And Daredevil #5 is more of a reason why.

Matt Murdock has been taking on cases as a consultant because everyone thinks he’s Daredevil. This may seem cumbersome, but it makes for great storytelling. Unlike Bruce Wayne, whom no one suspects as Batman, Matt is believable as a superhero. He’s blind, very intelligent and claims to have connections to the blind, very intelligent superhero Daredevil. Waid has a lot of fun with this as poor Foggy, Matt’s loyal yet bumbling assistant, tries his hardest to convince people that his partner is not Daredevil.

The issue seems to be building to some sort of climax as we’re introduced to The Bruiser, a villain who is a cross between Rey Mysterio and Bane. Waid and Martin do their best to show us that Matt is outmatched physically but is smarter and more strategic than his opponent. The end result is Matt getting kicked off a boat, but you get the general idea.

I mentioned Marcos Martin’s art as being simple. I say this because the art is clean and retro in its styling. But with Javier Rodriguez’s coloring, in some panels Daredevil appears more intimidating than Batman (if that’s possible). A few months ago, I stumbled upon the Ben Affleck Daredevil movie. The introduction hooked me, but the movie fell apart soon after. It seemed like the writers missed the heart and soul of Daredevil.

Waid, however, has captured it brilliantly. I can’t recommend Daredevil enough, and I hope it finds its way into your comic collection because these kind of seminal series are few and far between.

Brian Bannen uses his internal radar to find good comics. Let him bounce some sound off you on Twitter @Oaser.