Unwinnable’s Ian Gonzales participated in a roundtable interview with Attack the Block director Joe Cornish at the 2011 New York Comic Con. Joe enjoys a lot of the same stuff we do, like E.T., Friday the 13th and DVDs that are loaded with extras. Joe was kind enough to talk a little about where Attack the Block came from.

Question: Attack the Block is very much a British film. When you made it, did you have any idea that it would be a success in America?

Joe Cornish: Well, I think anyone who makes a film dreams that it might be a success. I think you don’t go into an endeavor as elaborate as making a film without some little voice in your head going, “Oh man, this is going to be fucking great!” But then it’s usually drowned out by the voices that say, “You’re wasting your time; this is going to be a disaster.” I always fantasized that it might be [a success]. Man, it’s extraordinary just to be here and to have been around the States with it.

I know Edgar [Wright] very well and I trailed around with him during the Hot Fuzz promotional tour. Now I’m visiting those places with my own film. It’s amazingly rewarding and I feel very appreciative that people dig it. It is massively influenced by American cinema. I was raised, I was bottle-fed by American cinema. It’s not totally far out that it connects because we all love similar things. 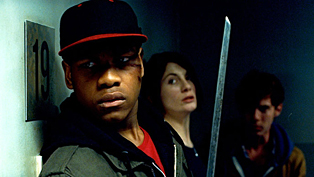 Question: You’ve said it took you twenty years to make a film. Why was that film Attack the Block?

There was a sense of ambition in those films and those directors forced themselves to deal with the currency of big movies. They’re about action and forward movement and big ideas. I love movies where necessity is the mother of invention.

I love the image of Gale Anne Hurd and James Cameron in her garage doing the final shot of The Terminator. The first Terminator is as good, if not better, than hundreds of $150 million movies I could name. Basically, it’s an independent, low-budget movie. I miss that. Lots of filmmakers try and do a similar thing, but I was waiting for an idea that felt like a mini-blockbuster.

Question: What influenced the creatures’ glowing teeth and no eyes?

J.C.: It came from lots of different places. It came from looking at my cat. I have a black cat and I grew up with a black cat. I was fascinated that when you backlight an animal with black fur – it looks two dimensional; it looks like a shadow. It occurred to me that film is the process of capturing a three-dimensional space and flattening it. So I thought almost mathematically, “What if you had a creature that was so black that its fur absorbed light and it visually looked like my cat – wouldn’t that sit in a film image in a cool way?”

I thought, “Cool, that might work.” We tested it six months before we shot and it kinda worked.

By that time, I had a sense of the overall look of the film. It was all at night and I was going to be dealing with high contrast bright colors and deep, deep shadows. I thought, “OK, if the body’s a deep shadow, something should be a secondary point to draw your attention.”

I was looking at a back issue of Cinefex and I was reading about how Steven Spielberg and Carlo Rambaldi put a light in E.T.’s chest and finger. I read about how Spielberg used light to express emotion in Close Encounters and E.T. That gave me the idea to make the teeth glow.

We approached the design of the movie and the cinematography and the post-production all with making the creature in mind. We did a special grade for the DVD and Blu-ray to make sure the black tones worked.

I used to obsessively watch DVDs and look at the black tones. I’m pleased if that worked for you.

Question: Do you have a name for the aliens? 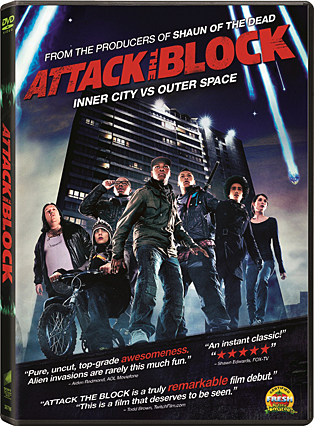 Question: The language and dialect in the movie is very unique and very British. How did you get that to work on screen? Was it hard to write?

J.C.: We did a lot of research. I started with a treatment and before I wrote the script I went to loads of young people and talked them through the story and listened to what they said. So a lot of the lines in the movie are things that people said.

“Too much madness for one text,” “You’re better off calling the Ghostbusters,” and “I don’t want to get chlamydia” all came from there.

Teenagers are funny and they know they’re funny. They’re naturally funny and that’s hopefully where the comedy of the film comes from. It’s not goofy or gaggy, it’s just teenagers being teenagers – sometimes intentionally, sometimes unintentionally.

Question: Was that all written or was any of it ad-libbed?

J.C.: It was all scripted. The kids had an opportunity to adjust the script before we shot.

But when you’re making a movie like this, you don’t have time to get all Judd Apatow on its ass. You’ve got to shoot what you need to shoot and move on. So if it feels natural, that’s testament to the atmosphere on the set and to these young people and how relaxed and comfortable they were. I work hard to give them ownership of it, to not be a dictator but be a collaborator and let them own it as much as I did. I’m really proud of them. I think they did an amazing job.

Question: How long did it take you to film the chase back into the block?

J.C.: We had about five days on that. It’s scary – you shoot a lot and it cuts down tiny, tiny, tiny. It’s scarily time-consuming. I think on big movies they give that to the second unit. I didn’t want any second unit stuff, I wanted to do it all myself. There was a bit of a learning curve. Once you factor in safety and the limitations of the environment, it was tough, but that’s what I love in film. I love chase sequences.

One of my all-time favorite sequences is the riverbed chase in Terminator 2 – such a beautifully-made sequence. It’s so geographically clear; there’s no shaky cam – it’s so elegant and locked down. I just wanted to see if I could approach just a tiny fraction of that.

J.C.: I wanted to be unexpected with it. I’m a big fan of the Friday the 13th movies. I love stalker/slasher movies. I love The Burning. What I wanted to avoid was how those movies have a moral structure. Characters will smoke pot or have premarital sex or they’ll do something “wrong” and they’ll get punished for it. I wanted to reflect the very real and random dangers that there are in the world for kids like that. There is no moral framework; it tends to be much more random. I thought it would be more exciting and truthful to make it random.

Question: Are you a product of an apartment block?

J.C.: No. I grew up very near blocks. I grew up in Stockwell in South London, which is very near where we shot the movie and where the movie is set. I’ve lived there all my life. I come from a nice, middle class, comfortable house. I have many friends who live in that environment. I have lived through five sets of riots since I was born in my neighborhood. I love my neighborhood and I love the people in it. This film wouldn’t exist without the story of those kids. That’s what it’s really about.

Question: You’ve said that this story came from when you were mugged. How did you bring aliens into the mix?

J.C.: I love that kind of movie. I am interested in any story that involves a monster or a Sasquatch or a ghost or some kind of reanimated corpse. It’s like sugar in my tea. I have to have a supernatural or fantasy element. That’s my favorite kind of movie, a movie that speaks about reality through the prism of bullshit is wonderful to me. All good sci-fi is about the present. Night of the Living Dead has amazing racial subtext. Invasion of the Body Snatchers is about McCarthy-era America. E.T. is about divorce. Godzilla is about the atomic bomb. All good science fiction is a way to look at reality in a fun way. I’m not really interested in anything else.

Attack the Block really does showcase Joe Cornish’s love of genre filmmaking. The DVD and Blu-ray are available now and have an hour-long making-of feature, a creature featurette, a meet the kids featurette and three commentary tracks. One track, the Executive Producer Commentary, features Joe and executive producer Edgar Wright talking about the genre cinema that influenced them as filmmakers. It is a joy for any genre fan to listen to in much the same way that Joe looked at the back issue of Cinefex.

Videogames vs. the World: eXistenZ