This week, Unwinnable’s comics guru and Internet dater Ian Gonzales fills in for Brian Bannen. So, without further ado…

Every issue of The Ultimates digs Nick Fury, Iron Man, Thor, Black Widow and company deeper into a ditch. It’s been nine issues since the series restarted and Reed Richards, the main antagonist, is as brilliant as his Marvel Universe counterpart – only he’s completely evil. Jonathan Hickman and Esad Ribic’s work emotes a feeling of dread and impending doom with each issue. 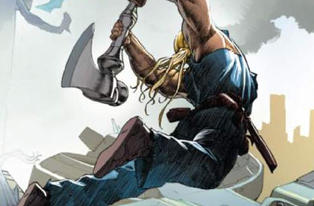 In this issue, most of Western Europe is still destroyed and the President has turned SHIELD against Nick Fury and the Ultimates. Captain America is still off in the desert, convinced he has no place in the world. Fury and company are outmanned and overpowered by Xorn and Zorn’s The People in the East and Reed Richards’ City and the Children of Tomorrow in the West – not to mention that Fury’s lost his strongest players, Jean Grey and the Hulk, to the People and Reed Richards respectively.

Nine issues in and the situation is hopeless.

One of my favorite sequences in this issue is the interplay between Thor and Iron Man. The two of them are in Stark’s lab, trying to figure out a way to fight Reed Richards and his City of super-evolved and amoral Children. Suddenly, SHIELD agents attack the lab. Ribic’s image of a depowered Thor battling with his super-science weather hammer and overalls shows us a fallen god that’s more than magic powers and a pointy helmet.

Hickman and Ribic continue to tell an epic superhero story in the Ultimates, building a status quo where, as the last pages of issue 9 show, no one is untouchable. 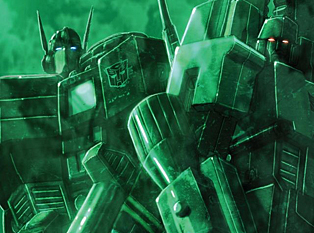 Before there was Optimus Prime, there was Orion Pax. The latest issue of the digital first series focuses on Orion Pax and Megatron before they were mortal enemies – when Megatron was a revolutionary and Orion was basically the leader of a transforming squad of robocops.

Original Transformers series writer Flint Dille, along with co-writer Chris Metzen and artist Livio Ramondelli, pile on the action and fan service in this issue as Orion and Megatron face off against the villainous Zeta Prime in the midst of Cybertron’s capital, Iacon.

Old timers Ironhide and Kup have a mutual admiration society moment, Starscream leads the Seekers in an aerial assault and Optimus and Megatron kick ass!

Transformers: Autocracy is a bite-sized series that takes advantage of its digital presentation via Comixology’s Guided View technology. There’s one scene in particular where Megatron is fighting Zeta. At the beginning of the panel, Megatron is throwing a roundhouse and one swipe later, Megatron’s heel smashes Zeta Prime’s face with a thunderous “KRANG” effect.

Transformers: Autocracy #8 is a fun issue that ultimately sets up the rivalry between Megatron and Optimus Prime. The series is pure popcorn for the Transformers fan. 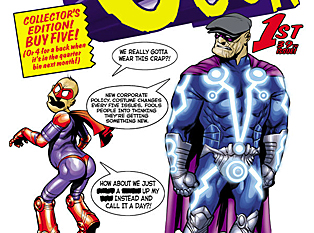 Gonzales’ Grab of the Week: Hey, remember when comics were nothing but a plethora of pouches, variant covers, primary-color events and a never-ending stream of rebooted number ones? Oh, wait, never mind.

One of the real gems of this issue is the letter column, in which Eric Powell lays down just how homogenous the comics business can be. Only 24 of the top 1000 comic books sold aren’t superhero comics from Marvel and DC. And while the narrative of this issue goofs on shots like the Ultimate Thor scene mentioned above, Mr. Powell takes great care to say there’s nothing wrong with reading superhero comics – just try something different, you may like it.

The Goon #39 is a biting and funny read, especially if you want a break from Night of the Avengers vs. the New 52 X-Men.

Ian was at the Battle of Iacon. It scarred him. Sometimes, he tells the tale on Twitter via @IanGonzales.