Zombies. True Blood. Halloween. These are just a few examples of the kinds of theme parties being thrown, not in your friends’ basements, but by New Jersey’s seminal nightclub, the Loop Lounge. Founded in 1986, the Loop Lounge quickly rose to prominence as a springboard for such national acts like Faith No More, Nine Inch Nails, Rollins Band and more recently, My Chemical Romance, cementing its legacy as a northern New Jersey hot spot for fun.

On Saturday, August 20, 2011, the Loop Lounge is undertaking its latest and most exciting theme party to date: the cosplay-inspired “Justice Loop of America”! More than just a costume party, the “Justice Loop of America” encourages everyone to don their favorite Superhero/heroine or Villain costume and take the night off from fighting crime or causing mischief and party hard.

Loop Lounge owner Matt Giaquinto took a moment to reveal the secret origin story behind the “Justice Loop of America” party to Unwinnable. “The JLA party was born from my uber-geeky theory behind most comic superheroes. Superman, Batman, et al., all have these secret identities. Imagine Clark Kent and Peter Parker, trolling through their underappreciated jobs and dealing with life’s unpleasantries by day and by night spending their time saving the world, getting the girl, you know, being themselves. Meanwhile, most of us, we don’t get that opportunity. We don’t have a Bat Cave, normal people don’t get the chance to spin around in a phone booth and emerge as someone who has the ability to save the world. Heck, even Butters on South Park has his alter ego. So I figured, why not give everyone that chance? That one night. A few precious hours to just let go and be that special person that sometimes only you can see. This isn’t Halloween, a night where everyone gets dressed up; this is just at the Loop. And on the 20th we’ll be the ones in on it, while the rest of the world, well, hell; they can go on living in their normal lives. ”

So put your I.D. in your utility belt, don your tights and capes, and get ready to descend upon Passaic Park on Saturday, August 20th for the “Justice Loop of America” party. 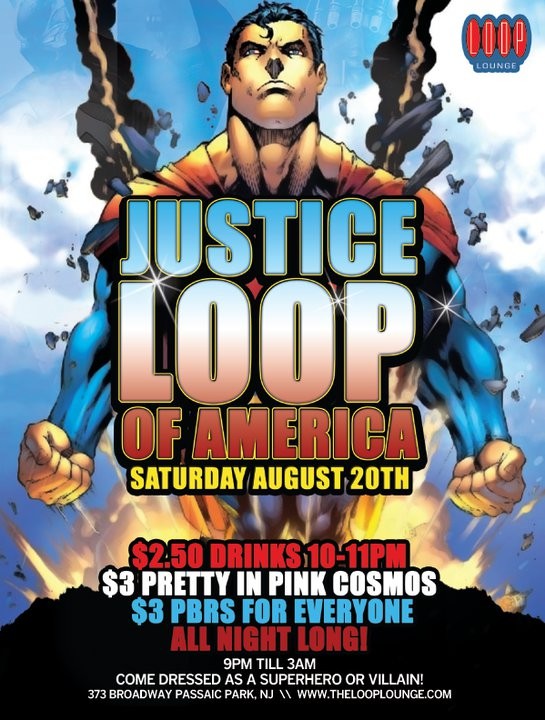 Full Disclosure: The Loop Lounge is a sponsor of Unwinnable’s Geek Flea.

George Collazo and John McGuire contributed to this report.